Accessibility links
Catching Up with Soul Icon Millie Jackson Millie Jackson carved a niche for herself in the 1970s with suggestive takes on soul songs that put her on the same forbidden shelf as the racy LPs of Redd Foxx and Richard Pryor. At 62, she says she has no regrets and wouldn't change a thing.

Hear a few of the songs that typify Jackson's vocal range and emotional reach. (Some of the lyrics are highly suggestive.)

'All the Way Lover'

'If You're Not Back in Love by Monday'

Millie Jackson, an R&B icon of the 1970s, had soulful grooves, lush arrangements and a velvet voice. She also had a lusty way of putting her point across. 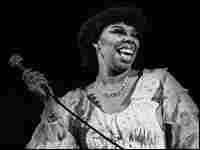 Her albums were spiced with foul language and risque subject matter... and they were also funky and hilarious, a guilty pleasure for countless fans.

Jackson, 62, says she cultivated her sexy image in part to distinguish herself from Gladys Knight. She sounds remarkably like Knight, especially when singing ballads.

"I think it's a Georgia thing -- us both being these Southern peaches," Jackson says with a laugh. "I just started cursing because [Knight] was too much of a lady to do that... It's all Gladys' fault! She's sending me straight to hell!"

Jackson's first hit song, a 1973 cover of "(If Loving You Is Wrong) I Don't Want to be Right," caused a furor. In the middle of the song, Jackson starts talking about being the "other woman" in a relationship, and loving it. The protests put her on the path to stardom, but they also created a niche Jackson has found hard to escape.

But she says she has no regrets. She still makes music and sometimes goes on the road.

"I've grown accustomed to me," she says. "I like me. I don't have problems with me." And she thinks sharing the same off-limits shelf with Redd Foxx and Richard Pryor puts her in pretty good company.