Accessibility links
Researchers Fan Out to Find Bird Flu in Alaska In Alaska alone, the goal is to test and screen more than 15,000 birds this summer and fall. Despite the looming danger, the surveillance effort is still somewhat of a work in progress.

Listen
Researchers Fan Out to Find Bird Flu in Alaska 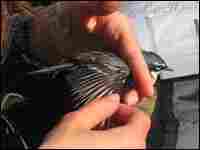 Biologist April Harding prepares to band a Yellow-rumped Warbler in Alaska for later identification. "If our bird flies to Texas and someone picks it up, they'll know where it came from and how far it's migrated," she says. Elizabeth Arnold, NPR hide caption 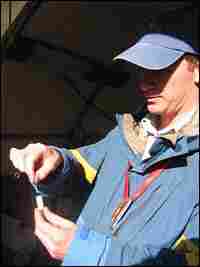 Doctoral fellow Andrew Lang from the University of Alaska at Fairbanks demonstrates one of the less glamorous tasks of field biology: putting a sample of bird feces into a vial for transportation to a lab. Elizabeth Arnold, NPR hide caption

The first migratory birds from Asia are showing up in Alaska, where the federal government is spending millions to detect H5N1, the strain of avian influenza many fear could mutate into a deadly form that can spread among humans. The virus has already killed millions of birds and at least 100 people in Asia alone.

In Alaska alone, the goal is to test and screen more than 15,000 birds this summer and fall. Despite the looming danger, the surveillance effort is still somewhat of a work in progress. Some of the biologists who are supposed to be capturing and sampling migratory birds are still in training.

The rush to catch up is not because of a failure of planning or a lack of funding. Detecting the H5N1 virus is daunting because neither birds nor viruses are predictable.

Plus, the birds are late to arrive this spring because of the cold weather. And state and federal agencies are still working on how samples will be taken, stored and shipped from 47 remote camps -- some with no electricity, running water or road access.

Alaska is key to America's surveillance effort, because it is a hub for dozens of migrating Asian and North American bird species. Nationwide, three federal agencies aim to sample 100,000 live and dead birds from sites from the Pacific Islands to the Atlantic coastal flyway.

Because of the urgency, officials have sought help from independent researchers and the birding community, people who normally spend their summers capturing and banding wild birds and already have experience in the field.

In Alaska, there are 28 targeted species that migrate to Asia, ranging from tiny gray-cheeked warblers to sand hill cranes -- birds on their way back to North America from Asia.

If H5N1 is detected in preliminary tests, what happens next is still largely unknown. Testing and retesting a sample could take weeks, and the sampled bird carrying the virus will likely be long gone by the time a positive test is confirmed.

Researchers will likely intensify their efforts in the area where the positive sample was found, and poultry farms along the migration route will be told to take precautions, such as covering cages or moving birds inside.

Even if H5N1 is never detected in Alaska, officials say the surveillance effort is worth the time and expense. The data collected from thousands of samples is invaluable to future research, as is the heightened awareness of diseases borne by wildlife.