Accessibility links
Excerpt: 'The Dream Life of Sukhanov' Rona Brinlee of The Bookmark in Atlantic Beach, Fla., recommends The Dream Life of Sukhanov by Olga Grushin in her conversation about summer reading with Susan Stamberg on Morning Edition. "This novel is about the choices and compromises we make in order to get what we think we want," Brinlee says.

Excerpt: 'The Dream Life of Sukhanov'

Excerpt: 'The Dream Life of Sukhanov' 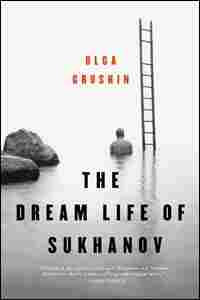 Rona Brinlee of The Bookmark in Atlantic Beach, Fla., recommends The Dream Life of Sukhanov by Olga Grushin in her conversation about summer reading with Susan Stamberg on Morning Edition. "This novel is about the choices and compromises we make in order to get what we think we want," Brinlee says.

"Stop here," said Anatoly Pavlovich Sukhanov from the backseat, addressing the pair of suede gloves on the steering wheel.

The white-and-yellow columns outside his window ceased their tiresome flashing, began to slow down, and in another moment fell obediently into their assigned places. A pale orange tentacle of a nearby streetlamp pierced the plush darkness around him, and Nina, who had been silent the whole way, stirred as if waking.

"Already?" she said absently, glancing outside.

They were there. With a slight sigh, she searched for something in her purse, as she always did upon arrival. Sukhanov waited patiently while she flipped open a compact, balanced its small convex pool of glittering blackness against her palm, slid a peach-colored pillar of lipstick out of the golden coils of its case, and proceeded to bend her face this way and that, trying to chase her reflection out of the shadows. Unexpectedly he caught sight of a delicately painted eye as it flitted along the surface of the mirror, but she moved her hand, and the eye blinked and vanished. Humming tunelessly, he looked away; even after twenty-eight years of marriage, he still felt awkward in such moments, as if caught spying on some private ritual. Finally the elusive reflection became trapped in the ray of the streetlamp, and she traced the contours of her full mouth in two quick flicks of her wrist, pressed her lips together with a tiny pat, and dropped the lipstick back into her purse. He heard the lock shut with a rapacious snap, saw out of the corner of his eye a cold burst of fire as a diamond earring passed through the light – and then, with a sudden fluid rustle, she was gone, as usual without waiting for her door to be opened. Behind her lingered a smell – the elegant perfume of tonight, whatever it was, and underneath, numerous layers of other fading scents, which had accumulated over time in the backseat of their Volga like so many sweet, barely discernible ghosts of past outings.

With a slow heave Sukhanov followed her out.

At this hour of the evening, on a Saturday, Marx Avenue was starting to grow quiet. The lamps glowed like tangerine balloons let loose in the soft haze, and in their light the eighteenth-century façade of the old Moscow university shone brightly, as dramatic and familiar as the stage set of some stately, stale play. Although it was early August, the air had already acquired that special, brittle and gentle, autumnal quality that made the world seem a breath deeper and a trifle less certain, as if seen through a sheet of crystal. Infrequent cars passed. A wide sweep of their headlights brought into sudden sharp relief vague shapes of passersby, for a solitary instant imparting volume and color to a youth in a drab suit darting recklessly across the street, an old man shuffling by with a crumpled newspaper under his arm, several ageless, heavy-faced women weighed down by bloated bags, and – strikingly, incongruously – a vision: a figure in a low-cut dress of shimmering green silk, standing tall and slender and long-legged by the curb.

Sukhanov nodded, turned back to the car, and rapped on the window. The tinted glass slid down without a sound, exposing the suede gloves inside, poised at the ready.

"Wait for us over there," he said curtly. "I expect we'll be a while."

As they walked the few paces to the Manège, they tilted their heads up, to get a better view of an imposing banner unfurling above the portico of the grand exhibition hall. "THE FACE OF OUR MOTHERLAND," read the enormous red letters, and, in the line below "Pyotr Alekseevich Malinin, 1905-1985."

"The dates make him sound dead," observed Sukhanov with displeasure. "They should make it clear it's his birthday celebration, don't you think?"

She shrugged and said nothing, only quickened her steps, and the deserted square greedily received each precise click of her silvery high heels. A broad-shouldered man who stood smoking by the entrance saw her approach and instantly, diving forward with his whole body, swung the door wide open; a waft of well-lit stuffiness and a cascading burst of a woman's artificial laughter escaped into the quiet darkness. As Nina passed inside, Sukhanov noticed the man follow her sheer silken legs with a speculative look. No one could ever guess her age, he thought, feeling pleasantly flattered. He was about to enter himself, when the man replaced the door and turned toward him, revealing a tentative wisp of a mustache in the middle of an insolent face.

"Just a minute," the man said in a bored tone. "This is by invitation only."

Sukhanov measured the fatuous mustache with a contemptuous look and unhurriedly reached into his pocket.

He had barely stepped inside when an ample woman stuffed into a tight dress of crimson velvet flew at him, opening her arms and crying shrilly, "Anatoly Pavlovich, the very man I was dying to see! Ah, do I have just the story for you!"

She was the wife of a famous theater critic; he had dined with them the other week. Tapping his chest with her plump index finger, she plunged into some involved tale, melting into debilitating giggles at every few words. Nodding mechanically, Sukhanov surveyed the place over her swaying shoulders. He had not been there for a while – in fact, not since…well, no need to be exact, he thought hastily, reining in his memory with the chilling sensation of the near-slip. Suffice it to say, it had been a long, a very long time, and everything looked quite different now.

The white-walled hall was welcomingly warm. A narrow red carpet ran across the shining floor in an appropriately solemn touch, unrolled, he was sure, just for the occasion, and the hum of manifold conversations splashed around long tables generously set with hors d'oeuvres. The crowd looked befittingly festive, and light danced playfully off every gesture, transforming a lifted champagne flute into liquid gold, setting a flock of sparks aflutter over an extended hand, causing tiny explosions with every turn of a woman's head. He saw countless dignitaries drifting about, and in the middle of the room he noticed Vasily, twirling a glass of wine and smiling his habitually thin smile and he bent toward an exceptionally bejeweled matron, whom Sukhanov recognized with a start as the Minister of Culture's wife. Ah, indeed, that boy will go far, very far, he thought once again with approval. Ksenya, needless to say, was not here yet; she always made a point of flaunting her thorough disregard for his position. But she was still young, only eighteen, and he was certain that, given her brilliant mind, she would in time –

The critic's wife leaned into him, oozing confidentiality.

"And so I say to him, 'It's all very well, Mark Abramovich, but your ending, my dear, your ending really doesn't work.' I mean, if you constantly hint at some terrible mystery, surely you should disclose it in the fifth act! And then, just imagine, he says to me, 'I don't think you understand my conception. By leaving things unexplained I'm trying to convey the general absurdity of our existence.' Can you believe it? The general absurdity of existence!"

As she collapsed in another outburst of helpless mirth, her breasts bounced up and down like two melons draped in taut crimson, her meaty earlobes flashed with amethysts the size of walnuts, and her second chin gave birth to a third. Muttering a halfhearted excuse, Sukhanov extricated himself from her voluminous grasp and quickly walked toward Vasily, and from halfway across the room her laughing shriek chased him still: "The absurdity of our existence, can you believe it, Anatoly Pavlovich?"

Excerpted from The Dream Life of Sukhanov by Olga Grushin. Copyright © 2005, Olga Grushin. Reprinted by permission of Putnam, a division of Penguin Group (USA), Inc. All rights reserved. 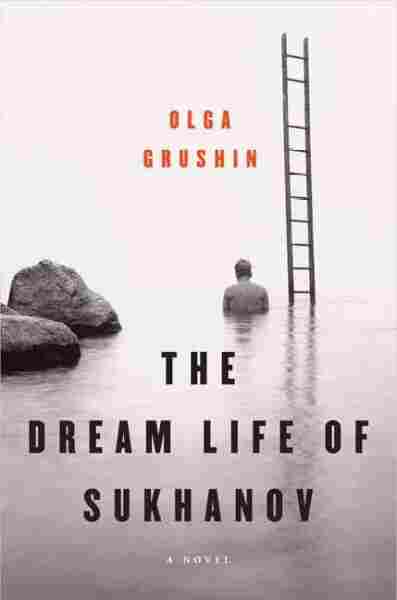 The Dream Life Of Sukhanov