Accessibility links
Howard's Blend: 'The Da Vinci Code' Director Ron Howard's adaptation of the book by Dan Brown's best-selling novel The Da Vinci Code walks a careful line. On one side lies world-famous art and shadowy figures. On the other is Howard, attempting to bring a unique interpretation to light. 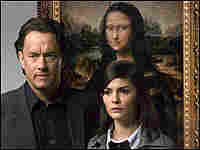 Tom Hanks and Audrey Tautou are on a search for symbols in the Mona Lisa and other famous paintings... but they have to stop a lot to explain things. Columbia Pictures hide caption 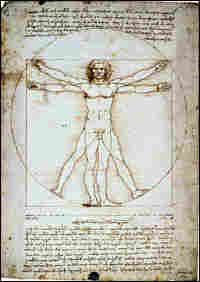 A play on Leonardo's sketch The Vitruvian Man gets the symbolism going in a clue-riddled plot. hide caption 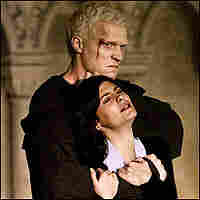 You've probably already heard all about The Da Vinci Code's secret, given the tens of millions of copies Dan Brown's book has sold since its release three years ago. So let's just skim the surface of the plot.

Robert Langdon, played by Tom Hanks, is an expert on symbols -- a "symbologist," if you will -- who is lecturing in Paris when the police contact him about a murder. A curator at the Louvre has been found on the floor of the main art gallery, his body positioned in a way that is clearly meant to send a message. Langdon realizes he's a three-dimensional recreation of Da Vinci's sketch "The Vitruvian Man," with a pagan icon painted on his chest in blood.

Langdon tells the chief of police that it's an icon representing the female half of everything, and right on cue, in walks the female half of the story. Sophie is not a symbologist, but a cryptologist -- a code decipher-er -- who can spot an anagram at 50 paces, which comes in handy as they go on what amounts to a scavenger hunt, trying to unravel not just a murder mystery, but what turns out to be the Holy Grail of biblical mysteries. Feeling they're out of their depth, they turn to -- who else -- an eccentric British knight, played by a pixie-ish Ian McKellen. He, too, traces things back to Da Vinci. Complications ensue.

Now, a number of controversies have attached themselves to The Da Vinci Code. Among them, whether its secret is, at root, blasphemous, whether its story is anti-Catholic, and even whether it reinforces unfair stereotypes about albinos -- though I'm not sure which "stereotypes" the crazed self-flagellating assassin albino monk, Silas, could be said to reinforce. Tom Hanks has been trying to defuse all of this in interviews by noting that the story is, "loaded with... hooey" which I'd say about gets it right. The question is why it isn't more robust, invigorating hooey.

The film, like the novel, is basically a series of long, complicated conversations that are not made any less long or complicated by being intoned urgently, at high speeds on highways. Director Ron Howard seems to have realized that he could bring a visual clarity to the book's chatter about anagrams and cryptexes (a neologism coined by Brown in the novel), just as he did to the mathematics in A Beautiful Mind. So there are flashbacks to the middle ages, and letters and paintings rearranging themselves digitally.

But the problem with making things clear this time is that the story is sort of lame when it's clear. On the page, mixed in with Brown's clumsy, travel-guide descriptions of European tourist spots, the twists have a certain mystery to them. Streamlined for the screen, they fall pretty neatly into movie conventions, so by the end of the first hour, even folks who haven't read the book will know basically where everything's headed. This leaves another hour-and-a-half of waiting for the characters to catch up.

Or I suppose you could use the time to play with anagrams on your own. The title: The Da Vinci Code seems a likely treasure-trove with all those vowels. One thing it yields when rearranged is "Catch de video," admittedly by misspelling that middle word, and with a couple of letters left over. Okay, that's a stretch, but then, so is the movie. I'm Bob Mondello.