Accessibility links
Netflix Manuever Draws Legal Fight Ninety percent of Netflix customers get their DVDs within a day of shipping. But a move by Netflix to thwart its own seamless system to save money on high-volume customers has landed the rental firm in court.

Ninety percent of Netflix customers get their DVDs within a day of shipping. But a move by Netflix to thwart its own seamless system to save money on high-volume customers has landed the rental firm in court. 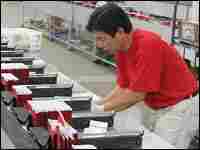 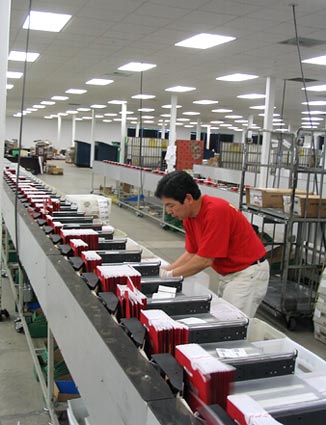 Machines at the Netflix distribution center in Santa Ana, Calif., sort DVD mailers by zip code to speed delivery. Each machine can sort 17,000 mailers per hour.

Millions of mailboxes around the country will be stuffed this week with slim red envelopes from the Netflix company, which rents movie DVDs by mail for a flat monthly fee. The seven-year-old service has built a loyal following, thanks to its wide selection of film titles and its speedy delivery. Most customers get their movies within a single day.

NPR's Scott Horsley went behind the scenes to find out how Netflix delivers such fast service and why sometimes slow delivery pays off.

Netflix may be the hip modern offspring of the Internet and the DVD. But it's also an old-fashioned mail order business, a great-great grandchild of Sears & Roebuck. This Spartan warehouse in Orange County, California, is one of 39 distribution centers Netflix operates around the country. There's one in Hawaii and another coming soon to Alaska. Workers, wearing red Netflix t-shirts, begin the day here by opening some 130,000 DVD envelopes that customers have just returned.

Mr. STEVE SWAYZE (Netflix): They literally rip it open, toss out this part of the envelope and then remove the DVD, check to see that the title of the DVD is the same as the sleeve. And then there's a visual inspection to make sure there are no cracks or scratches or damage. It goes back in the sleeve and this goes back into inventory.

HORSLEY: The workers move quickly but carefully. Netflix spokesman Steve Swayze notes each employee gets a free DVD player and a Netflix subscription. So the discs they're handling could be their own.

Instead of being put on a shelf somewhere, the returned DVDs are almost immediately sealed up in a fresh, red envelope, ready to be addressed and sent on to another Netflix customer.

Mr. SWAYZE: The DVDs are kind of like electrical current. They're always in motion. Everything that is here in a DVD is going out to somebody else today or tomorrow or perhaps the next day.

HORSLEY: DVDs rarely gather dust because Netflix subscribers have eclectic tastes. A small movie like Hotel Rwanda is more popular with the company's customers than the box office hit Ocean's 12. And except for some seasonal movies, Netflix is constantly renting almost every title in its collection.

HORSLEY: With seven million DVDs going out every week and another seven million coming back, Netflix says it's one of the five biggest customers of the post office. The company even hired a former Postmaster General this year as its new chief operating officer. The Netflix envelopes have been designed and redesigned to be lightweight, durable, easy to stuff and recyclable. They're also tailored to post office automation equipment. And even before they get to the post office, the envelopes are automatically sorted by zip code.

Mr. SWAYZE: So this is going to Long Beach. This is going to City of Industry. This is going to Mojave. Look at all the people in Mojave getting DVDs from Netflix, big stack here. The post office then is able to get it out because it's already sorted by zip code. That's part of the speed of Netflix.

HORSLEY: But sometimes Netflix deliberately throws a wrench into this well-oiled machine. Fine print on the company's website notes in some cases Netflix may wait a day or more before sending a movie to a customer and it may ship the film from across the country instead of the closest warehouse. Those delaying tactics may limit the number of movies a subscriber receives in a month. Netflix acknowledged them last year after a false advertising lawsuit filed by Attorney Adam Gutride.

Mr. ADAM GUTRIDE (Attorney): Netflix was advertising unlimited rentals with one-day delivery. But in fact the more movies you rented, the slower Netflix sent the next one.

HORSLEY: It's like an all-you-can-eat buffet that hides the plates when a big eater comes back for thirds. Gutride says Netflix is trying to save money. Each roundtrip mailing costs the company $0.78 in postage, which could quickly eat up profits since subscription start at just $10 a month.

Netflix settled the lawsuit last month by offering affected customers one month free or upgraded membership. Spokesman Swayze says the vast majority of customers are highly satisfied, even with some shipping delays.

Mr. SWAYZE: The good news on this: this happens very rarely. More than 90 percent of Netflix members receive their DVDs, generally, within a day. There are occasions when some folks have had to wait a couple of days or even longer.

HORSLEY: The occasional delays haven't stifled growth for Netflix. The company now has nearly five million subscribers and expects to have more than six million by the end of the year.

Even attorney Gutride, who shared $1.3 million in the legal settlement, has just signed up as a new Netflix member.