Accessibility links
A Heavenly Voice Keeps 'Da Vinci' Humming The soundtrack to the film The Da Vinci Code is filled with celestial voices, high and eerie wails that appear on many film tracks. So what do celestial voices sound like when they talk? Renee Montagne finds out in an interview with Hila Plitmann, the classically trained performer who sings the celestial solos in The Da Vinci Code.

So, maybe you ignored the bad reviews, and went to see The Da Vinci Code over the weekend. No matter what you thought about what you saw, there's no escaping what you heard.

(Soundbite of music from the movie, the Da Vinci Code)

INSKEEP: Celestial voices like these seem to appear on all kinds of film soundtracks. They inhabit almost any scene where you're supposed to feel awed, or inspired, or just creeped out.

You will hear those same eerie voices in the film Braveheart.

(Soundbite of music from the movie, Braveheart).

INSKEEP: And here they are, a slightly different feel here in Batman.

(Soundbite of music from the movie, Batman)

INSKEEP: And now, here comes a whole army of voices in Lord of the Rings.

(Soundbite of music from The Lord of the Rings)

INSKEEP: To find out what it takes to sound celestial, we tracked down Hila Plitman(ph), who sings in many of the scenes in the Da Vinci Code. She lives, conveniently, in the City of Angels - which is where she joined Renee Montagne.

It is entirely possible to imagine Hila Plitman as a celestial being gazing down from a painted ceiling.

MONTAGNE: She has the look; fine features set off by waving, golden hair. She's a classically trained singer, born in Israel. She's performed around the world.

Although she hasn't read the Da Vinci Code, she did see scenes from the movie. In fact, she watched those scenes while singing the music that would accompany them.

Ms. HILA PLITMAN (Singer): The feminine voice symbolizes secret feminine power, and when it comes in, its in places where that power is revealed, or even just insinuated.

MONTAGNE: In this case, though, much of what you were required to sing, didn't require words.

Ms. PLITMAN: Yeah. In this particular score, Hans Zimmer, the composer - he asked me to make kind of a false sense of Latin at times. For instance, I would say, crrrrr, the combination of consonants that was too harsh, like, crucifixes, and he needed it to be delicate, then I would have to modify it hru-hee-hwee-hooo, or something like that.

Ms. PLITMAN: Yeah, in a sense. Sometimes it gives you too many boundaries if you already have a text, or it inhibits what you might actually do.

But it's funny about language, isn't it? Because very few people will actually understand real Latin anyway.

MONTAGNE: Well I was just floating up from my childhood catechism Latin. You would take something like dominos bo biscum?

Ms. PLITMAN: Mm hmm. I would make, boo-hee-uuuu-eee-uuuu, and somewhere in the distance maybe it would sound somewhat like Latin.

MONTAGNE: Just to give us a sense of what was going on. How did they manage to show you scenes from the film?

Ms. PLITMAN: Well they would actually bring a computer monitor, and they had subtitles. Sometimes it was a bit problematic because I would get distracted by the film, and just kind of be looking at it, and then realize, oh, I should be singing right there.

MONTAGNE: So it was very immediate?

Ms. PLITMAN: Yes, and a lot of times, I remember, I would get the music and then I would just sing.

Ms. PLITMAN: And they would say it's too happy. And so, that's a very complicated little word because music is so abstract. But they would say, we need it a little more melancholy.

Ms. PLITMAN: You know, they always say that the singer that cries on stage -nobody wants to listen to. Because you want the singer to make you cry, not to be sitting there and watching somebody cry. So sometimes it's not necessarily that I would feel sadness, but I would think how does my voice sound in order to make somebody feel sadness.

MONTAGNE: Would you mind - you were telling us what the composer, Hans Zimmer, was asking you to do while you were doing this for the film - would you mind if we took, spent just a little time and I sort of threw out a handful of…

Ms. PLITMAN: Not at all.

MONTAGNE: …possible things to do?

MONTAGNE: Well, you could pick a phrase and do it a little bit longer.

Ms. PLITMAN: Well one of the main themes in the movie, a beautiful, beautiful melody, let me just sing it for you.

MONTAGNE: Now if you would let me, just ask you to take that over, in a few other ways and - how about eerily?

Ms. PLITMAN: Oh, I've got chutzpah. What can I say?

MONTAGNE: So do we, to ask you to do it.

MONTAGNE: No question about that. All right. So, after you were finished…

MONTAGNE: Using your voice in this way, did you walk out in any way lighter? I mean, feeling more angelic?

Ms. PLITMAN: That's, I mean, I guess exhausted would be more the word, because we had worked so many hours. But, yes, in many ways I did feel very soulful.

Singing beautiful music will make you feel like you're - joined the rank of the angels. Yes, absolutely.

INSKEEP: We have an interview with the composer of this music, Hans Zimmer, and you can hear it at npr.org.

This is MORNING EDITION from NPR News. I'm Steve Inskeep, with Renee Montagne. 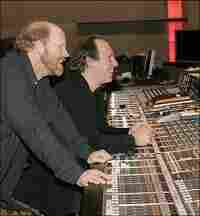 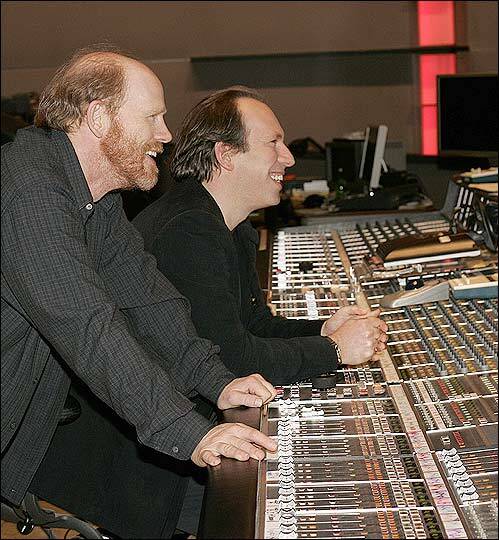 Ron Howard (left) and Hans Zimmer in the studio. 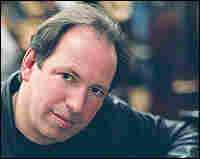 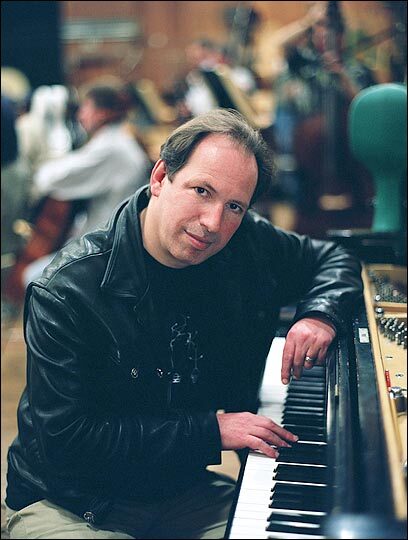 The Future of Film Music

You can't see the big-screen version of The Da Vinci Code for a few more days. But composer Hans Zimmer's score is already out on CD, and the music sets a tone that is both suspenseful and brimming with emotion.

Zimmer is a cinema powerhouse. His past work includes Gladiator, The Thin Red Line, Batman Begins and The Lion King. The latter won him an Academy Award. He last collaborated with Da Vinci Code director Ron Howard on the movie Backdraft.

Writing the score for what might be the most-awaited film of the year required a delicate balance. The result is reflective, but rises to the occasion for action-packed sequences.

Music From The Movie

Zimmer talks with Liane Hansen about the composition process, writing electronic versus orchestral scores and the future of film music.