Accessibility links
Forecasters Call for Another Busy Hurricane Season A hectic, above-normal tropical storm season could produce between four and six major hurricanes in the Atlantic Ocean and Gulf of Mexico this year, but conditions don't appear ripe for a repeat of 2005's record activity, the National Hurricane Center predicted Monday. 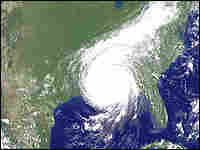 Government forecasters say 2006 is likely to be another busy hurricane season in the Atlantic.

The National Oceanic and Atmospheric Administration (NOAA) expects eight to 10 hurricanes in the Atlantic this year. Last year, there were 15, including six that struck the United States.

Hurricane season begins June 1 and runs through the end of November.

One reason this year could be milder than last year is that there is no La Nina condition. La Nina, which did exist last year, shifts the jet stream in a way that favors hurricanes.

Even so, forecasters expect more than an average number of storms, due to a climate pattern that tends to produce several decades of unusual hurricane activity followed by several quiet decades.

Since 1995, nine of 11 hurricane seasons have been above average. Last year's season was one of the worst on record.

'The Great Deluge': A Katrina Post-Mortem May 22, 2006
Behind the Scenes at the National Hurricane Center May 19, 2006
FEMA Builds Hurricane-Tracking System as Season Looms May 16, 2006
New Orleans Leaders Float Emergency Plan May 2, 2006
Red Cross Executives Admit Need for Cultural Shift April 14, 2006