Accessibility links
Morel Satisfaction: Stalking the Wild Mushroom Morels are a chef's mushroom, opulent, earthy tasting, and delectable in cream. T. Susan Chang muses on her fascination with the wild fungi -- and the devotees who brave countless miles of poison ivy and pests to forage for them. 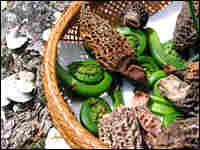 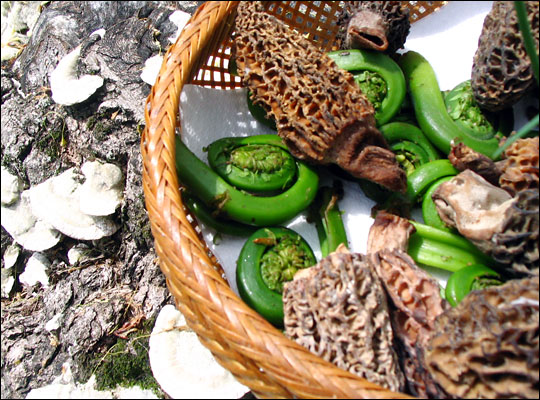 I have a fascination for wild mushrooms, and for those who hunt them.

Mycophiles are not like the other growers, gatherers and producers of the food supply. Agricultural practices such as crop rotation and chemical inputs mean nothing to them. Few can drive a tractor, and livestock only interests them as the source of manure that provides good habitat for fungi. Even among hunters, the mushroom foragers are singular, with their immobile and silent prey.

T. Susan Chang is a New England-based freelance writer and a Kellogg Food and Society Policy Fellow. She writes a monthly cookbook column for the Boston Globe food section, and her articles on cooking, gardening and nutrition appear in a variety of national and regional publications.

Yet in their flightless seclusion in the dark and damp, wild fungi are as elusive as any other woodland creature. Those who seek them out are the devoted priests of an inscrutable faith, braving countless miles of poison ivy, ticks and mosquitoes in the search for a succulent morel.

I've walked with the foragers a few times, attempting to understand their secrecy and fanaticism. They have their own nerdy-hipster language: "LBMs" are little brown mushrooms; "BUMs" are boring ubiquitous mushrooms; "potato chip conditions" describe a dry, pine-needle carpet that crunches when you tread on it.

Some covet slime molds, others dream of boletes and polypores. They even have a special walk -- a casual, wordless amble, head crooked to the side and down, but not enough to give away exactly where they're looking.

The mushroom hunter's year begins with morels (Morchella esculenta), beige or charcoal and honeycombed with crevices. Their delicate texture alone is enough to make a hunter strap on his boots at the first trickle of melting snow.

Morels first appear when the snow has just melted and the sap has run. They are masters of camouflage and notoriously difficult to find, so closely do they resemble the dreary, gray leaf litter of early spring. They thrive on decaying apple trees in abandoned orchards, in forgotten lime deposits and in asphalt cracks.

The sex life of morels is mysterious, but we know that they are necrophiles. They are the ambulance chasers of the forest floor, thriving on the death of trees and the rain that speeds their decay. Mushrooms, in fact, are merely the fruit of a vast subterranean fungal body, the mycelium, which waits in morbid repose for a natural disaster to prompt its libido.

Last year, thousands of elms died of drought, and on the nutrients from their carcasses a bumper crop of morels has been creeping forth, like wrinkled zombie armies. Between that and the forest fires, it's turning out to be a post-apocalyptic binge year for morels.

In the spring, there are other fungi to be found -- common agarics, striped and shelf-like turkey tails, tiny and colorful ascomyces. But morels are the treasure everyone's really looking for, rare as gold and priced much like it.

It's hard to mistake another mushroom for a morel, though there is the "false morel" that looks more like a brain coral or a lump of spray-on insulation. (It may or may not kill you, tomorrow or in 10 years.)

Morels are a chef's mushroom, opulent and earthy tasting, delectable in cream. Sauces cling to, but don't waterlog, its hollow, sponge-like caps.

In the morel mecca that is the Midwest, the treasure hunt will go on all summer, right through September in some places. There the madness of the foragers knows no time and no limit.

Online at MorelMania.com, you can find maps tracking the seasonal progress of morels as they appear, south to north, across the country. There also are special morel shirts, morel hatpins, morel key rings and magnets.

I have never found a morel. In fact, I have a kind of reverse ability: Even expert mycophiles who walk with me scarcely find a thing. But their rock-solid sense of priorities always leaves me inspired.

One of these days, I will park my car for a whole week, thereby conserving an entire tank of gas. With the ensuing savings, I will buy a whole pound of morels. I will eat them with fiddleheads, with roast chicken, with fresh pasta and cream. I will savor their dark fraternity, their enigmatic majesty. Because you never know: This might be the year that nature takes a sabbatical. No droughts, no weeks of unending rain, no forest fires, no dead elms -- and few morels, until next year.

Morels have a tendency to turn cream a bit gray with prolonged contact, so in this recipe, they are sauteed separately then mixed with the cream at the last minute.

Bring a large pot of generously salted water to a boil.

With a slotted spoon, remove the morels to a plate and reserve, leaving the aromatics in the pan. Add the cream to the pan and slowly simmer to reduce by nearly half.

Meanwhile, cook the dried pasta in the boiling, salted water until just al dente. If using fresh pasta, wait until the cream sauce is nearly done and cook the fresh pasta for just 2 to 3 minutes.

Drain the pasta and transfer to a warm serving bowl. Add the morels to the cream and heat briefly. Toss the morel cream sauce with the pasta and scatter with chives.

From Paul Gayler's A Passion for Vegetables: Simple and Inspired Recipes from Around the World (The Lyons Press 2003).

1 pound asparagus, trimmed by snapping off the tough ends

Bring a large pot of salted water to a boil and add the asparagus. Blanch for 1 minute, then drain well.