Accessibility links
When an Ex Moves, Do the Kids Go, Too? Massachusetts may soon have the first ruling by a state high court on what has become a growing dilemma for family courts: When divorced parents share custody, should one parent be allowed to move out of town with the kids?

Listen
When an Ex Moves, Do the Kids Go, Too? 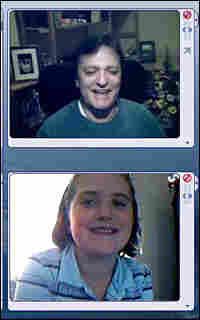 Chuck Mason, who lives in suburban Virginia, has regular virtual visits with his daughter, Arielle, on the computer. Father and daughter use instant messenger to talk, exchange pictures and play games during their online time together. Courtesy Mason family hide caption

When they first divorced, Jim Mason and Betsy Shanley Coleman found it relatively easy to work out a way to share custody of their two young boys.

A decade ago, most divorces ended with one parent — usually the mother — getting sole custody. Today, more parents are sharing joint custody of their children after divorce.

Parents who have joint legal custody share the right to make decisions about their child's schooling, religion, medical care and other issues related to how their child is reared.

Joint physical custody means that both parents have the right to have their child live and spend substantial amounts of time with them. This type of custody is easiest when both parents live near each other, so that switching back and forth from mom's house to dad's doesn't upend the child's daily schedule.

Both parents lived within 20 minutes of the boys' school in Chelmsford, Mass., outside of Boston, and the boys spent a good amount of time with each parent. After a while, it all became routine: The boys would trade off, sleeping one week at their father's place and the next week at their mother's.

But it wasn't long before things fell apart. Coleman remarried, had a new baby and announced that her new husband was moving and she needed to follow him. She asked a family court for permission to take the boys 100 miles north, but the judge denied her request. Coleman appealed, saying it was unconstitutional to keep her locked in the town where she had lived before the divorce. 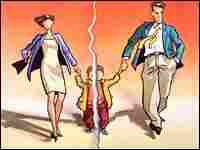 When a Parent Has Sole Custody:

As judges grapple with the question of move-aways in cases of joint custody, states are also rethinking whether to allow a parent with sole custody to move with the children.

Most states used to favor a parent's right to move. But experts say the pendulum is now beginning to swing back from a mostly "open-door" policy a decade ago, and judges are beginning to tell parents who want to move "not so fast." A round-up of state laws shows great disparities.

But Coleman's former husband has questions of his own. He wants to know when it became OK to uproot two boys and move them so far from their father that he could no longer be involved in their daily lives.

"It would have turned me into a Disney Dad," he says, "just participating on weekends or vacations. That wasn't what I thought was going to be best for my boys."

A Vexing Call for Judges

The case, Mason v. Coleman, is now before the Massachusetts Supreme Judicial Court, where experts say it could yield one of the nation's first high-court decisions on what has become a vexing problem for family court judges: when and whether to allow a divorced parent to move out of town with the kids, when the other parent objects.

Judges say it is now one of the hardest decisions they have to make. Just a decade ago, most divorces ended with one parent -- usually the mother -- getting sole custody. Courts would almost always allow the mother to move, as long as she could prove she wasn't motivated by spite. Judges generally believed that if the mother was the primary caretaker, keeping her happy would ultimately benefit the kids as well.

But with a growing number of parents today sharing custody, and with new research showing the importance of children staying connected to both parents, many courts are now raising the bar.

"This is a very fluid area of the law," says Duke University Law School Dean Katharine Bartlett, "and the standards have been moving all over the place."

Bartlett says many judges will now allow moves only if they are shown to be in the best interest of the child. But there is no consensus on how to make that assessment.

"Courts and legislatures have been trying to find rules of thumb that work, and they really haven't done very well," Bartlett says. "The factors they have to use are all very difficult to get a grip on."

For example, is mom's new job -- and extra $20,000 in salary -- worth cutting the kids' time with dad? And if so, by how much? What if every other week becomes every other weekend? How about if mom makes an extra $50,000 -- with "flex" time -- and gets to bring the kids closer to their grandparents and cousins? Now does that justify the time lost with dad? Or what if, as in Betsy Coleman's case, mom has to move so she can be with her baby and new husband?

"It's not like you can feed all this stuff into a computer and get a printout saying, 'OK, you can move,' or 'You can't move,' " says Suffolk University Law School professor Charles Kindregan. "There's no magic bullet to this, and there is no simple answer."

Fathers' rights groups say courts should start with the presumption that kids should not move away from a parent unless there's a compelling reason. Ned Holstein of a group called Fathers And Families says that reason has to be more than just a better job.

If courts are too permissive regarding moves, Holstein says, any parent could essentially sidestep a joint custody order simply by requesting to move far away.

But others say it's unrealistic, and unnecessary, to tie a divorced parent down for 12 or 18 years. Attorney Pauline Quirion, who chairs the Massachusetts Bar Family Law Section, argues that moving out of town doesn't necessarily ruin a relationship.

"I think with modern technology, we're not in the sort of horse and buggy days," Quirion says. "Now you can get cheaper plane fare; you can communicate by e-mail and Webcast. And you can still be actively involved in your child's life."

Indeed, many divorced parents do it all the time.

In a home office in suburban Viriginia, Chuck Mason (no relation to Jim) waves to a color image of his 10-year-old daughter, Arielle, who is video conferenced live on his computer from Colorado, where she lives with her mom.

"Hi, sweetheart. I can see you!" he exclaims. "Did you have a good day in school?"

After three years of such video calls twice a week, Arielle is at home with the technology, and with the fuzzier-than-real-life picture of her far-away dad. The two play online checkers together and send each other photos. Mason can check out Arielle's new teeth, or listen to the new song she can play on her recorder. He says he can do virtually everything online that he does during the in-person visits he gets with Arielle four times a year. He says the computer hook-up allows him to stay close in between visits.

"When I first started talking to Arielle on the phone, it was like pulling teeth," he says. "When we're on the computer together, I can't get her off-line."

Some worry that judges will begin to see so-called virtual visits as a substitute, rather than a supplement, for the real thing -- and that might make judges more inclined to allow parents to move.

Ira Ellman, a professor at Arizona State University's Sandra Day O'Connor College of Law, believes that children would be better off if courts tried harder to keep both parents close. To do that, Ellman says, courts should consider not just whether the mother really needs to move, but also whether the father is able to follow. The question becomes: Who would have an easier time making the sacrifice required to keep everyone together?

"In a lot of these cases, we could see that at least for one of these parents, the burden is not so great," Ellman says. "And if that's the case, then the court ought to tell that parent, 'It's up to you [to move].' Because expecting one or the other parent to make some sort of sacrifice strikes me as perfectly appropriate. That's what married parents do for their children all the time."

Ellman also thinks that in cases where a parent doesn't have a compelling reason to move, courts ought to be more willing to play hardball, telling a parent who insists on moving that the court will switch custody to the other parent.

"It's a case in which [the parent is] not going to call your bluff; they are going to stay put," he says. "And maybe this weapon, used very judiciously, is not so crazy, because you might end up producing a better result for the child in a bunch of cases."

It's a risk many judges don't want to take. But, as judges are the first to concede, their other options are not much better. After 25 years in family court, retired Judge Edward Ginsberg says these "move-away" cases present some of most daunting decisions he's ever faced, with the highest stakes.

As a judge, Ginsberg says, he always took comfort in knowing that if he made a wrong decision in cases involving such issues as child support, it could be fixed later on. But when it comes to move aways, he says, once you move a child away from a parent, there's no going back.

Now before Massachusetts' highest court, the case Mason v. Coleman asks the court to set a standard to be used to modify joint custody orders when one parent seeks to move away with the children.

Watch the oral arguments before the court