Accessibility links
'American Idol': The New Establishment Slate's Jody Rosen talks with Renee Montagne about tonight's American Idol finale. A new contestant will be crowned the fifth winner in the show's history. Rosen says the show is more than just popular; it's good for pop music.

Slate's Jody Rosen talks with Renee Montagne about tonight's American Idol finale. A new contestant will be crowned the fifth winner in the show's history. Rosen says the show is more than just popular; it's good for pop music. 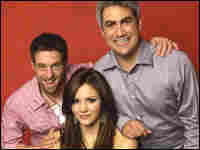 Tonight is the big night in another race; American Idol crowns its winner.

Now in its fifth season, it is the most watched television show in the country. Some 50 million votes were cast for performers in the contest last week. To put that in perspective, that's nearly as many votes as were cast for each of the candidates in the 2000 presidential election.

One man fully caught up in the national addiction to American Idol is Jody Rosen, who writes music criticism for the on-line magazine, Slate.

Now, it's way past my bedtime, this show, but I do know that R&B hopeful, Taylor Hicks, was in a face-off last night, against a classic girl pop singer, Katharine McPhee. These guys are all hopefuls, but you write in your Slate article, that American Idol is actually quite good for pop music generally. How so?

Mr. JODY ROSEN (Music Critic for Slate.com): Well, you know, when the show began it very quickly established itself as such a highly rated TV show, and there was little doubt that the winners of the show, and even some of the also- rans, would do quite well in the commercial marketplace. The big, sort of, surprise of the show, has been that several of the records made by the show's past winners have turned out to be quite good. Very solid pop music albums, or albums in their various genres.

The first winner, Kelly Clarkson, is an excellent pop singer whose second album, Breakaway, sold ten million copies. And the kind of lead single from that record, Since You've Been Gone, placed third in the Village Voice Pop Critics Annual Pazz and Jop Poll, which is very prestigious critics poll.

The music that they've made has turned out to be surprisingly good and not at all kind of glorified karaoke as some critics warned it would.

MONTAGNE: Right. So much so that, again, as you write, A-list singers, who used to turn up their noses at the show, have sort of bought into it.

Mr. ROSEN: The show is a showcase, these days not just for the would-be stars, but for established stars. People this season, like Barry Manilow, and Rod Stewart, and Stevie Wonder, have turned up in guest spots to kind of tutor the hopefuls. And it's proven to be an important advertising vehicle for established singers as well as the contestants.

MONTAGNE: So where did your vote go?

Mr. ROSEN: You know, I was disappointed that the runner-up in the previous week's show, Elliott Yamin, was eliminated. But as far as last night's contests went, the final, my vote would go to Taylor Hicks, the 29-year-old, gray- haired, classic soul singer, over Katharine McPhee, who's more or less a straight pop singer, in the kind of Whitney Houston mode.

And I think Taylor Hicks is going to win in a walk tonight.

MONTAGNE: So, obviously, you'll be tuning in.

Mr. ROSEN: I'll definitely be tuning in, as will much of the country.

MONTAGNE: Jody, thanks very much. Jody Rosen is music critic for Slate.com, joining us from his home in New York.

This is MORNING EDITION.