Farai Chideya talks with reporter Aaron Glantz about his book How America Lost Iraq, the journalist's firsthand account of how popular support in Iraq for the U.S. invasion slipped away.

And this is NEWS AND NOTES.

Radio Reporter Aaron Glantz didn't want to go to Iraq, he says, because Dictator Saddam Hussein's officials kept reporters from doing their jobs. When U.S. forces went to war and Hussein was overthrown, the country became more open to reporters. So Glantz decided it was time to go. But reporters still faced danger, confusion and conflicting stories. Glantz took those Iraqi and American stories, plus his own experiences, and turned them into a book. It's called, How America Lost Iraq.

He spoke with NPR's Farai Chideya.

In a new introduction to the paperback, you say, When I wrote this book, most Americans believed the Iraq War was winnable. But in late 2005, almost three years after George W. Bush declared mission accomplished, an almost daily barrage of bombings and killings have convinced most people this is not war is not going according to plan.

What does that mean? If we think, as a nation, that the war isn't going according to plan - what does that mean from here on out? Are Americans going to become increasingly vocal and say, we want to pull out? What do we do now, Aaron?

Mr. AARON GLANTZ, (Journalist and Author, How America Lost Iraq): Well, I think the problem is that American people, they really want to do something good in Iraq. And they saw that getting rid of Saddam Hussein, that a lot of people were really happy about that.

But what I observed happening over the time that I spent in Iraq and why I felt comfortable writing a book called How America Lost Iraq, is that I saw that goodwill turn into hatred over the course of only a year. If somebody doesn't want you in their country, then you have to respect that and leave them alone.

CHIDEYA: You met a guy early on, admittedly, who said that he wanted to name his children George Bush.

Mr. GLANTZ: That's right. I was trying to talk to as many regular Iraqi people as possible and get as big a diverse spectrum of opinion as possible. And so one of the things I did, because you have to remember, right after the fall of Saddam Hussein, there was no telephone service at all, no electricity at all, days-long line for gasoline at the pump. All of those continue, by the way.

But what I did, I went door to door in Karada, which is an ethically diverse, economically diverse, section of central Baghdad. We walked up the dark hallways and we knocked on doors in apartment buildings. And we found a family - the father who was out of work, working at a cigarette factory. The cigarette factory closed down because of lack of electricity. Mother at home, not wanting to send their child to school because the streets were so unsafe, but still so happy that Saddam Hussein was gone, that they were thinking about naming their future kids after George Bush.

I haven't been able to go back since then and talk to that same family, but I wouldn't be surprised if they've rethought that, because I've talked to so many other people. I talked to a businessman, in Ademia(ph), which is like Sunni resistance central in Baghdad. And he told me that he was so happy when Saddam Hussein was overthrown, that he had actually prayed for the discovery of weapons of mass destruction to justify the invasion.

But one year into the occupation, two of his relatives had been incarcerated by the Americans without trial at Abu Ghraib Prison. And he told me it's the same struggle as under Saddam's regime. Now, it's only been replaced by the American's themselves.

CHIDEYA: How old were you when you went to Iraq?

CHIDEYA: Young and, some would say, stupid. We're you ever afraid?

Mr. GLANTZ: I was never concerned about my physical safety, but emotionally, it was very draining to go and hear such terrifying stories, almost each and every day.

CHIDEYA: As a reporter who was working, at least in part, for Pacifica, which runs Democracy Now and which is very much a left media outlet, you ended up finding that some of the stories that you found - perhaps, like the guy who said, I want to name my kids after George Bush, - was not going down well with your editors. So you wrote an open letter to Pacifica saying, looking back, I believe Pacifica did not show solidarity with the Iraqi people in its broadcasting, but instead showed solidarity with the Baathist dictatorship of Saddam Hussein.

Now, those are fighting words. How did your colleagues react to that?

Mr. GLANTZ: To take the step back, I went there specifically to catalog the stories of regular Iraqi people. And when I got there, I found that even though there was no clean water and no electricity and day-long lines for gas at the pump, that people were really relieved that Saddam Hussein was gone.

And I was then, and I still remain today, against the war. But Pacifica and a lot of left media preferred not to talk about the crimes of Saddam Hussein, because it confused the matter.

CHIDEYA: You had some, at least to me, funny experiences. Because you are someone who's got dark hair, you've got a beard. You said you'd been there long enough that you had picked up a slight Arabic accent. And you would go up to Americans to go and try and interview these military guys, of which you have many interviews in the book. And they would be like, oh, no, you're a translator. And you're like, no, no, I'm an American. How did that feel to you?

Mr. GLANTZ: Well, the scariest moment - single moment that I had in Iraq was the day we arrived. We pulled in to this other area that's near the Palestine Hotel, and there was a checkpoint. And I was in a 1970s station wagon, orange and white checkered taxi, and I come in from Amman, Jordan, it's about 14 hours. But there was this American soldier there pointing his gun at us.

And so I said, oh, I'll get out of the car and I'll talk to him. I get out of the car and he looks at me and he sees my slightly darker skin and my black hair and my beard and he doesn't believe that I'm a journalist. And he cocks his gun and is ready to shoot me. And the only reason that something bad didn't happen in that moment is that I was with a French colleague and he was blonde. And so he saw my French colleague, he went around me and said, oh, why didn't you tell me that you were a journalist?

And this is kind of a funny story, but when you think about the tremendous numbers of Iraqi journalists who have been killed at checkpoints, it's not very funny at all.

There was a Iraqi television producer who was on his way to a wedding and he misunderstood the instructions that he was given, because we don't train our soldiers in how to speak Arabic or even how to speak, what I call, checkpoint Arabic, stop, turn around - things like this before they get sent over. And he misunderstood and his car was pelted with dozens of bullets and he was dead. And this happens because of the same kind of lack of cultural understanding that I was experiencing. And it's not a good way to make friends.

CHIDEYA: You cite a study in the British medical journal, The Lancet, and it found that in U.S.-occupied Iraq, Iraqi's were 58 times as likely to die prematurely as they were during Saddam Hussein's rule. So that means 100,000 people may have died prematurely, including violent deaths. Do we Americans want to know about this? Do we want to know what's in your book?

Mr. GLANTZ: I hope so. The reason I brought that up in the conclusion of the book was that when that study came out in 2004 and it showed that 100,000 more people had died in the first year of the occupation compared to the last year of Saddam's regime, that neither Bush nor Kerry thought to talk about it, even though it came out just a few weeks before the election.

CHIDEYA: Aaron Glantz is the author of How America Lost Iraq, now out in paperback. Thank you for coming to our studios. 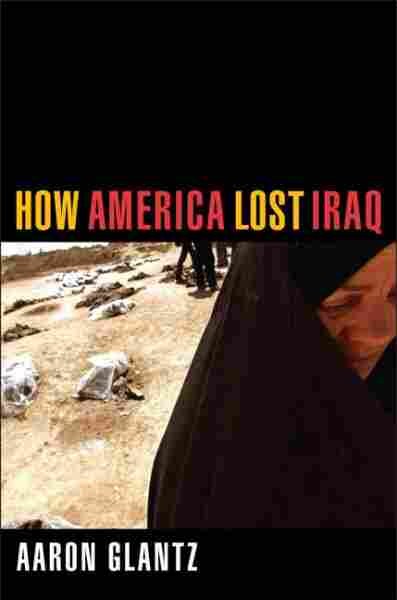