Accessibility links
Assessing the Art, Science of 'Inconvenient Truth' The new documentary about Al Gore and global warming, An Inconvenient Truth, scores on two counts, say two NPR experts. It does a good job on the "big-picture" science of climate change while being a "pretty terrific movie," too. 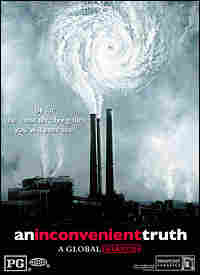 The new documentary, An Inconvenient Truth, is about global warming -- and former Vice President Al Gore's long quest to raise awareness about the issue.

Bob Mondello, NPR film critic, and Richard Harris, NPR science correspondent, talk to Michele Norris about their evaluation of the art and science of An Inconvenient Truth.

See a Clip from the Movie

Global Warming: An Uncontrolled Experiment May 9, 2006

Film critic Mondello says he was "skeptical" before seeing the movie. Instead, he discovered an "elaborate, gorgeous" movie filled with impressive digital effects. He also found that the Al Gore of the film is a "different" Al Gore than the public is accustomed to hearing: pensive, funny and thoughtful about an issue that he calls a "planetary emergency."

Science correspondent Harris agrees that the movie is effective, particularly in conveying the complexity of the issue.

"It really does take an hour and a half to start to really understand global warming," Harris says.

He says Gore -- and the film -- get the "big picture" on climate change right. On some of the finer points, though, Harris says there is still scientific debate. And that sometimes isn't reflected as clearly in An Inconvenient Truth.

The reason behind the melting of Mount Kilimanjaro's snows is an example of this. As Harris notes, the snows have been melting since the turn of the last century. This may possibly be because of decreased rainfall, not increased temperatures, as Gore argues.

The 'Other' Al Gore