Accessibility links
Summer Hazards: Sunburn ... and Barbecue? Researchers have confirmed that cooking meat too long over a dry, intense heat creates small amounts of cancer-causing chemicals. Unfortunately, that's just the sort of flavor-enhancing fire you get on a backyard barbecue. What's a summer chef to do? 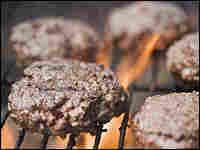 This Saturday marks the beginning of barbecue season, and some well-meaning guardians of health are filling the Internet with new ways to make good food taste bad.

What else can barbecue lovers do to cut the health-risks of grilling?

Scroll down for a roundup of methods for cooking steaks, hamburgers, hot dogs and vegetables.

They do mean well. In the last few years, researchers have confirmed that cooking meat too long over a dry, intense heat creates small amounts of at least two kinds of compounds that can lead to cancer. Unfortunately, that's just the sort of flavor-enhancing fire you get on a backyard barbecue.

Go ahead. Scrape off the black crispy bits all you want. That will reduce one type of carcinogen, but not the other, which forms deeper inside the meat.

To keep this second type from forming, you have to keep the meat moist and avoid high heat that lasts longer than 10 minutes. The problem is, to avoid food poisoning, you must cook your burger or chicken to a high enough temperature to kill E. coli and other gut-wrenching bugs.

That's where the goofy recipes come in -- dozens of them circulating on the Internet and beyond -- all claiming to keep the cancer-causing chemicals at bay even in well-done meat.

Last weekend, in a friend's backyard, I did a little taste test with some of the weirder ideas. I checked in with some scientists, too. Here's what I learned.

The American Cancer Society thinks you should pre-cook the meat, maybe by microwaving it first. Others recommend wrapping a burger in tin foil with a few teaspoons of water before putting it on the grill.

I have to tell you, lemon and dill-seasoned salmon cooked in foil over hot coals is tender, moist and delicious. But steamed hamburgers? Even doused with ketchup, that burger in foil tasted like a wet dog smells.

On the other hand, soaking raw chicken in marinade for 10 minutes before you cook it will keep those outer layers moist, and help keep carcinogens from forming, even if it's cooked directly on the grill.

If marinades aren't for you, there's another option. Use less meat in your recipe. Pretty much anything that dilutes the meat dilutes the carcinogens, too.

In northern Michigan, a popular butcher mixes ground cherries into his ground round. Scientists say strained blueberries, grapes or plums should be just as protective.

When I told my friend Abe that barbecuing might be risky, he was thrilled.

"I've already given up drinking, smoking and motorcycles," he said. "It's nice to know I have one reckless habit left."

Life is short and it can be shifty, too. We might go ahead and dodge this weekend's crispy beef kabob, only to be quietly maimed by a dash of aflatoxin in our organic peanut butter.

So my advice this Memorial Day is slap on some sunscreen, pull up a lawn chair, and have a little fruit salad or broccoli with your burger. There are no health guarantees. For heaven's sake, let's eat! 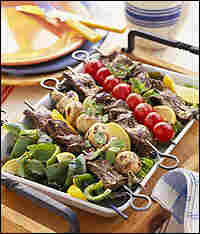 Devising a summer menu these days that balances tastiness against the risk of getting heart disease, food poisoning, or cancer can seem impossible.

Relax. There is a middle path, even for carnivores.

It's true that some studies suggest that eating meat cooked over coals (or pan-fried or broiled, for that matter) a few times a week may slightly increase your risk of getting cancer. But precisely which cancers -- and how much the risk is increased -- remains fuzzy.

"We know that we're not talking about the sort of strong link we see with cigarette smoking and cancer," says Rashmi Sinha, a nutritional epidemiologist at the National Cancer Institute who has studied the problem. "Grilling poses a many-times smaller risk."

And there are ways to cut that risk even further. So barbecue-lovers, hold on to your spatulas and try these tactics instead:

Use leaner cuts. Reducing the fat in your steak or ground round will curb the risk to the heart, and also whittle the chances that fat dripping through the grill will hit the coals and flare up to char the meat. Scraping off the char -- or preventing it from forming -- decreases one family of chemicals that can cause cancer. These are called "polycyclic aromatic hydrocarbons" or PAHs.

Unfortunately, eating leaner cuts won't shield you from the second group of carcinogens, known as "heterocyclic amines" or HCAs. During prolonged cooking at high temperatures, HCAs form beneath the surface of meat, due to an interaction between free amino acids and creatine, which are reactive molecules found naturally in meat.

So add ground fruit, or soy, or potato starch to ground meat to avoid HCAs. The idea here is to use less meat. (Eating smaller steaks, of course, is useful, too). Pleva's Meats in Cedar, MI., markets a ground beef containing about 10 percent ground, tart cherries, a mixture found in at least one study to significantly reduce the formation of HCAs -- with the added bonus of producing a burger that's juicer than one made of meat alone.

Biologist Mark Knize of Lawrence Livermore National Laboratory, who studies the carcinogens formed in cooking, says that adding other fruit, or meat substitutes from soy or other vegetable sources should work just as well.

Wrap it in foil. We're lucky here; fillets or fish steaks cooked inside foil packets with whatever spices or juices you like actually taste better (and are more likely to stay moist and hold together) than fillets cooked directly on the grill.

Retaining moisture is key to preventing the chemical reaction inside fish and meat that produces carcinogens at high heat.

Marinate. Skinless chicken may be healthier for the heart than red meat because it contains less fat, but it can be even higher in HCAs when cooked on the grill, probably because it loses moisture so readily.

Removing the skin after cooking lowers that risk somewhat. Even better, marinating skinless chicken pieces for 10 minutes before grilling them will increase the moisture content and cut HCAs, without upping the fat.

Sinha says pre-cooking chicken briefly at low heat in the oven before grilling also works, as does microwaving the meat, though microwaving can make chicken rubbery.

Eat fewer. Although only scant amounts of HCAs have been found in grilled hot dogs (probably because the casing seals in moisture), that doesn't make them risk-free. Nitrites often used to preserve hot dogs, sausages, hams and other processed meats have been linked to cancer, too. Some studies suggest that eating fruits and vegetables alongside may cut that risk.

Eat more. Do try not to burn them to a crisp (PAHs form in charred food of any kind). But HCAs don't form in vegetables. That's one reason the American Cancer Society encourages barbecue lovers to eat slimmer portions of meat and fill those plates instead with lightly grilled peppers, yellow squash, mushrooms, corn, onions, or whatever vegetable or fruit strikes your fancy.