Accessibility links
In Northern Iraq, a Revival of Kurdish Cinema Kurdish culture is experiencing a Renaissance in Iraq since Saddam Hussein's overthrow -- and Kurdish cinema in particular is enjoying new attention. Ivan Watson reports on how Kurdish filmmakers are flourishing in northern Iraq.

In Northern Iraq, a Revival of Kurdish Cinema

In Northern Iraq, a Revival of Kurdish Cinema

Kurdish culture is experiencing a Renaissance in Iraq since Saddam Hussein's overthrow — and Kurdish cinema in particular is enjoying new attention. Ivan Watson reports on how Kurdish filmmakers are flourishing in northern Iraq. 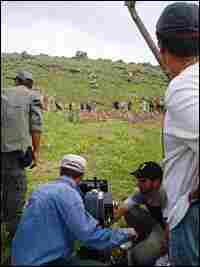 Iranian Kurd crew members film an outdoor scene for the film Jan-i-gal, based on a tragic novel of the same name set in Iraqi Kurdistan in the 1950s. Ivan Watson, NPR hide caption

Web Extra: Hear a song from the Kurdish film Jan-i-gal

This is DAY TO DAY from NPR News. I'm Alex Chadwick.

And I'm Madeleine Brand. Three years after the fall of Saddam Hussein, Kurdish-controlled northern Iraq has become a cultural magnet of sorts for Kurds around the world. Artists, writers, film directors and producers, have all been setting up shop in the Iraqi Kurdistan region. And they're producing a growing list of critically acclaimed films. NPR's Ivan Watson reports.

In a village in the green highlands of Iraqi Kurdistan, a director yells (foreign language spoken) to start the camera rolling.

WATSON: Crew members spray fake rain over a crude cemetery that's been built in a small Kurdish village just for this scene.

WATSON: As an assistant yells instructions over a megaphone, the lead actor is escorted by Kurdish guerilla fighters who carry antique rifles. They approach the grave of a small child, where the actor falls to his knees and begins quietly weeping. This is to be the film version of an Iraqi Kurdish novel called (foreign language spoken), which means agony of the people. The actors are Iraqi Kurds, while the crew members are all from Iran.

WATSON: The director is Jamil Rostami, a Kurd from Iran who is filming his second full-length feature in Iraqi Kurdistan since the U.S. invasion. He says working conditions are more primitive here than in Iran, but Rostami says he feels at home with his fellow Kurds.

Mr. Jamil Rostami (Kurdish Film Director): (Through translator) Yes. (Unintelligible) is my country because the culture, language, and everything is mine. That's why I come here. Otherwise I could - I would (unintelligible) to go and work in Europe, in Iran, or in India.

Mr. ROSTAMI: (Through translator) When I think this (unintelligible) now is happening to Kurdistan.

WATSON: The best-known movie to come out of the fledgling film industry in northern Iraq is Turtles Can Fly.

(Soundbite of music from film "Turtles Can Fly")

WATSON: This award-winning 2004 film was made by another Iranian Kurdish film director named Bahman Ghobadi. It was set just before the U.S. invasion of Iraq and it focuses on a group of orphaned Kurdish children who struggle to survive in a refugee camp. In this scene the main character, a teenage boy nicknamed Satellite, sets up a satellite dish so the refugees can watch the invasion of their country on CNN.

(Soundbite of movie "Turtles Can Fly")

Unidentified Announcer: What does it mean for the reconstruction of Iraq? And I'll be honest with you...

WATSON: On arrival, Sahebe says he was disappointed to learn that Iraqi Kurdistan was less developed than Iran. And he has had considerable trouble finding financial backing for his project. He recently had to resort to making this propagandistic music video for the Kurdish leadership to help make ends meet.

WATSON: Even directors like Rostami, whose well-funded project enjoys the support of the Kurdish leadership, face considerable challenges getting anything done on time. For the artificial rain in the village cemetery scene, it took half a day to get permission to borrow a water tanker truck from the fire department. The truck broke down soon after the filming started. Then, panic erupted among the cast and crew when a patrol of American soldiers in Humvees rapidly approached the village.

Unidentified Man: They said don't you know that I'm working this shoot, at random. They don't care about anyone.

WATSON: The troops quickly left, though, after telling villagers they were looking for five detainees who had just broken out of a nearby U.S.-run prison. Ahmed Mahmud(ph), one of the Iraqi Kurds playing the part of a rebel fighter, stood sweating in a wool uniform under the hot sun. He said he's not doing it for the money.

Mr. AHMED MAHMOUD (Kurdish Actor): No, nobody wants the money here. Only we want cinema to come to my country and my culture be going to high quality. We need cinema. We don't have cinema here.

WATSON: As Rostami waits for a backup water tanker to arrive, he shared this recording of a haunting melody, which will be part of the soundtrack for this tragic Kurdish movie.

Watch the Trailer for the Kurdish Film 'Turtles Can Fly' (In Kurdish, with French Subtitles)