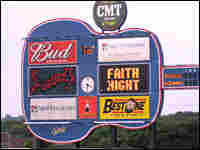 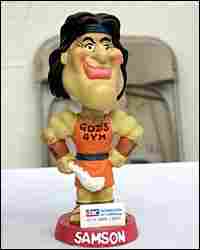 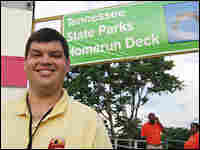 Rev. Ryan Bennett is a pastor at the United Methodist Church in Cheatham County, Tenn., and the director of Faith Night games for the Nashville Sounds. Audie Cornish, NPR hide caption

Faith Night has long been a popular promotion for minor league baseball parks -- particularly in the South. Looking to capitalize on local church-going fans, more than 40 teams in minor league baseball and football have added Christian rock concerts and bobble-head dolls of biblical characters to their game-time entertainment.

The formula has worked well in Nashville, where the concept first started, and it's now being called up to the majors.

Rev. Ryan Bennett is director of Faith Night for the Nashville Sounds, a Triple-A baseball team. On Faith Nights, he also offers sermons outside of the team's Greer Stadium. One recent sermon featured a parable drawn from former Red Sox infielder Bill Buckner's infamous error, when a ground ball rolled between his legs just as the long-suffering Sox were on the verge of winning the 1986 World Series.

But Faith Night fans aren't just in it for the baseball allegories. These events feature special performances by Christian rock groups. There are also raffles for bobble-head dolls in the image of Moses and Jonah. Later this season, there will be a stadium-wide Bible giveaway. And the events often include a team player, in full uniform, offering testimonials about their faith.

And of course, there's the game.

A Big Draw for Fans

Since the Nashville Sounds started up five years ago, their program Faith Night games have been among the top-10 most-attended each season. Organizers say it's because of people like Methodist pastor Jacob Armstrong, whose church group on one night was 80-plus strong, taking up most of the section behind home plate.

"In some ways, it's icing on the cake, because the majority of the night is spent at the baseball game," Armstrong says. "I know several families [who] have invited friends, and it's a non-threatening way to come to a church group. And then maybe they will come to church again."

This summer, at least two Major League Baseball teams are working on adding a Christian Faith Night to their rosters. But will a Bible Belt, minor league promotion work at big-league prices? Baseball fan Jack Crawford of Talahoma, Tenn., says it will be a tough sell.

"It's a bigger deal to go to a major league game and see the stars," Crawford says. "While some people may think that a faith-based night would be very nice in some circumstances, others may not. And they feel like other people's faith may be shoved down their throat."

That's exactly what Faith Night founders are trying to avoid.

"As much as I think it would be great for the kingdom-building aspects of what we do and the ministry side, you are not going to see a preacher down on home plate with a Bible, preaching to the crowd," says Brent High.

High is the CEO of Third Coast Sports, which contracts with more than 40 other minor league teams on similar promotions. He says it's not just baseball clubs; two NFL football teams and another three NBA basketball clubs have contacted him about holding Faith Night programs.

"I just don't anticipate it offending a non-Christian fan at any point," he says of the Faith Night promotions. "It hasn't happened yet, and I don't see us adding anything that would do that. Because ultimately, as soon as we do that, the teams lose interest."

That's why Faith Night performances are scheduled before or after the official game, held off to the side or on stadium concourses. Bible giveaways are handled through a redeemable coupon system at the gate. And if you don't want a Moses bobble-head doll, just say no. Nashville Sounds General Manager Glen Yaeger says it's a balancing act.

"We do 'Thirsty Thursday' on Thursday nights. Its beer today, God tomorrow," Yaeger says. "It's managing the expectations of your fan base."

Derrick Hall, executive vice president for the Arizona Diamondbacks, says his team has "shied away from a Faith Night."

"That's not something we think is appropriate for us," Hall says. "But we absolutely have no problem selling group-discount rates to a [faith-based] group."

The Diamondbacks have booked just one game with Third Coat this season, which Hall calls nothing more than a group sale opportunity.

Meanwhile, the Atlanta Braves have set up several dates with appearances by Christian pop-groups such as The Afters, and their own pitcher, John Smoltz, as a guest speaker.

Derek Schiller, a senior marketing executive for the Braves, says research shows many of his team's fans are religious.

"This is just a way to apply ourselves and create an experience that would be good for those types of fans," Schiller says.

Both teams say they have dabbled in marketing group sales to churches, but nothing as elaborate as the original "Faith Night" model. These summer games are just a test, says Schiller, because in the end, it's all about the ballgame.