Accessibility links
Manhattan Prepares for Sensational Sunset The sun will set in a blaze of glory in Manhattan Sunday, fully illuminating every cross street during the last 15 minutes of daylight. Astronomers -- and druids -- are looking forward to the phenomenon, which will be repeated on July 13.

The sun will set in a blaze of glory in Manhattan Sunday, fully illuminating every cross street during the last 15 minutes of daylight. Astronomers — and druids — are looking forward to the phenomenon, which will be repeated on July 13. 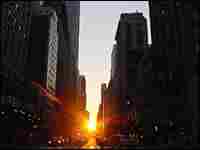 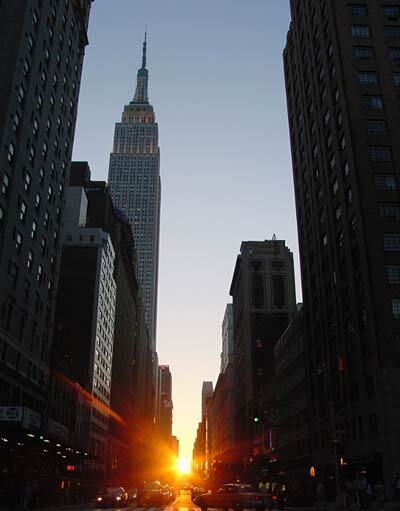 Sunlight illuminates Manhattan's cross streets, as the sun sets in exact alignment with the city's street grid on May 28, 2001.

Some New Yorkers like to believe they live at the center of the universe. Well, this weekend a cosmic coincidence might add to their confidence. On Sunday evening, the rays of the setting sun will align perfectly with the cross streets of Manhattan.

If you walk out on 42nd Street and squint your eyes a little bit and look up, you could picture these buildings as sort of monoliths and the entire city as a kind of Stonehenge. Robin Watson is a chef headed to work and I asked him some of those imponderable, Stonehenge-like questions, why are these buildings here?

Mr. ROBIN WATSON (Chef, Manhattan): The buildings are here because they house a lot of workers, really.

SMITH: Okay. Easy enough. But who put these buildings here?

Mr. WATSON: A lot of property owners did it here.

SMITH: Okay. I'll give you that one. But here's a harder one, what's the cosmic significance of these buildings?

Mr. WATSON: To reach into the heavens.

SMITH: He's not that far off. Twice a year these buildings act as a sort of cosmic frame and the sun looks like it sets perfectly down the middle of the east-west streets. Neal Degrasse Tyson, an astrophysicist with the American Museum of Natural History, has seen it happen on 34th Street.

Mr. NEAL DEGRASSE TYSON (American Museum of Natural History): If you're far enough over, the sides of the street almost approach a vanishing point. And so you can't even believe that something important is going to happen at the end of infinity there, but sure enough, the sun comes into view and it illuminates both the north and south sides of the street at the same time. There are no shadows on the street. It's something to behold.

SMITH: But also something completely normal. We think of the sun as setting in the west, but really it only sets on true west twice a year: on the spring and fall equinoxes. All the other times, the sun sets at a slightly different spot, north or south every day. So eventually, most cities will have this same special moment in the sun.

Mr. TYSON: If you have a street grid in your hometown that points in any sense of the way in the westerly direction, there will be a day of the year where the sun will align right along the length of that street.

SMITH: But somehow SaltLakeCityhenge doesn't sound as good as Manhattanhenge.

Mr. TYSON: Maybe they ought to find something else to call it.

SMITH: Okay. So the Manhattanhenge event isn't that big a deal for scientists or, apparently, for Druids either. Modern day Druids, who feel a connection to the original Stonehenge, are holding a big gathering this weekend, but in upstate New York, not here in the city. I reached Isaac Bonowitz, an Archdruid, by cell phone on his way to the Druid convention and I told him about Manhattanhenge.

Mr. ISAAC BONOWITZ (Archdruid): It would be nice to be there, but I'll try to catch it next year.

SMITH: Bonowitz says there are far too many henges for a simple Druid to visit them all. There's Carhenge in Nebraska, Foamhenge in Virginia.

Mr. BONOWITZ: People just like to pile up those stones. They have a powerful, you know, subconscious effect on people. And, you know, what is New York if not a whole bunch of piles of really big stones?

SMITH: Tyson, the astrophysicist, says that future civilizations, when they dig up Manhattan, will just have to puzzle over this strange alignment and our calendar.

Mr. TYSON: The first occasion that the sun sets on the grid is basically Memorial Day weekend every year. The second occasion happens to coincide with baseball's all-star break. And so this culture would presume that we were about sort of war and baseball and worshipped the sun in between.

SMITH: Which isn't too far off. But for now the perfect sunset over Manhattan on Sunday is just one of those times to pause for a moment in the big city.

Mr. TYSON: It's the universe asking to be noticed by those who never thought to look up.

SMITH: And just make sure when you're looking up at the heavens, you don't get hit by a taxi.