Novelist Deon Meyer writes in Afrikaans and his books wrestle with South Africa's racial tensions. The most recent book translated for American audiences is Dead Before Dying. Meyer talks with Linda Wertheimer about his work.

Deon Meyer is a thriller writer that I'd put alongside some of my favorites like Lee Child or John Sanford. His books are about men who don't fit in, who are maimed by some deep and dreadful experience and are trying to find a way to live on this earth. What makes Meyer especially interesting is that he's a white South African writing in Afrikaans about a society that has had those deep and dreadful experiences, a society that is also trying to find a way for all of its people to live together.

Deon Meyer joins us from Cape Town in South Africa.

Mr. Meyer, welcome to our program.

WERTHEIMER: You have written three novels, which have been relatively recently made available here. Some of the same characters show up in all three, and some of the same themes. But the one we want to talk about today is called Dead Before Dying. And it's about a cop who's struggling with the loss of his wife and not really making it.

WERTHEIMER: Could you talk about this character and his - who he is, his experience?

Mr. MEYER: I needed a character, first of all, to solve the murders, because the murders are the main intrigue of the book. But I also needed a man who had a lot of other things to cope with. He's overweight. He's drinking too much. He gets a new commander at the Murder and Robbery Unit, who tells him that it's either shape up or ship out. He's very depressed.

I just thought that the reader would identify much more with a character who not only struggles with solving of a series of murders, but also with some very personal issues.

WERTHEIMER: The police procedural, now that is a classic American, British, French mystery format, cops working their way through the case, Scotland Yard, the L.A. Police Department, the St. Paul Police Department. But generally, these cops are good guys. And our impression from here is that cops in South Africa, pre-Mandela, were not.

Mr. MEYER: You know, when I started doing research for this book, I spent about two weeks with the Cape Town Murder and Robbery Squad. And I met both types of detectives. I met some really good guys, exceptionally intelligent. And then I met some bad apples as well. So they were both there. And obviously...

WERTHEIMER: And they're both still there.

Mr. MEYER: No, I don't think so. I think the bad element either were removed or felt very ill at ease in the force, and in the past 10 years have left.

WERTHEIMER: But you still build into your characters the possibility that they have done or seen dreadful things in the past, things that have involved black South Africans. That's a sort of a cloud that's hanging over your book, all your books.

WERTHEIMER: Do you think that timing has something to do with the fact that you can write a police procedural novel now, and send it out to the world and expect people to identify with your hero?

Mr. MEYER: Absolutely. I think it would have been totally impossible to write a book about policemen, or former policemen, in the old South Africa under the apartheid regime. What Nelson Mandela and F.W. De Klerk did for me personally was they freed up police detective heroes and private eyes so that one can write about them. I don't it is possible to have a protagonist in a police state as a hero.

WERTHEIMER: Do you think the crime novel, this genre of novels, helps you, as a plot form, to explore contemporary South Africa?

Mr. MEYER: You know, Ian Rankin once said when we had the discussion...

Mr. MEYER: He said that he thinks crime fiction is probably the genre where you can learn most about another society. And I think so. Yes. I think crime and everything that is related is as part of a culture, and a country, and an atmosphere in a country than anything else.

WERTHEIMER: The most recent book of yours has as its hero a black South African.

WERTHEIMER: How'd you feel about going down that path?

Mr. MEYER: You know, in South African crime fiction, whatever we've had over the years, we've never had a black protagonist. And I just felt that it was time. It was something that needed to be done in Afrikaans literature. The biggest challenge was to get inside the head of a black character. And I was very aware of the fact that the critics, and especially in South Africa, would say how dare a white Afrikaner, South African, create a black protagonist?

So I knew I had to get it right. Despite all the cultural research that I've done, despite all the Xhosa people that I spoke, because this protagonist is a Xhosa and...

WERTHEIMER: You can do that and click. I'm impressed.

Mr. MEYER: In South Africa, we have 11 different languages, and maybe a few more cultural groups. One of the black cultural groups is the Xhosa. There's also the Tswana, and the Sesotho and the Northern Sotho, and the Zulu and the Vanda and the Phuthi, et cetera, et cetera.

WERTHEIMER: And how was it received? What did the critics tell you?

Mr. MEYER: It was extremely well received. I remember specifically there was a Xhosa journalist from the Sunday newspaper in South Africa called the Sunday Times that did an interview, and she was asking me all sorts of questions, and I was waiting for the big Xhosa question. And eventually, when she didn't ask it, I said, but please tell be what did you think of Tobela, who is the protagonist. And she said, Oh, he's a typical Xhosa guy. And she went on. And I knew then that I was going to be okay.

WERTHEIMER: You speak English very well. Why don't you try writing a book in English?

Mr. MEYER: You know, it's one thing to speak it. It's another thing to write it in such a way that you feel you get everything right the way that you want to. That's the one reason. The other reason is that Afrikaans being a small African language, it's the only contribution I can make to my mother tongue to help this language survive, is by writing in it.

Mr. Meyer, thank you for spending time with us.

Mr. MEYER: Thank you very, very much. It was a great honor being with you.

WERTHEIMER: Dead Before Dying is the book his publishers hope will introduce Deon Meyer to American readers. 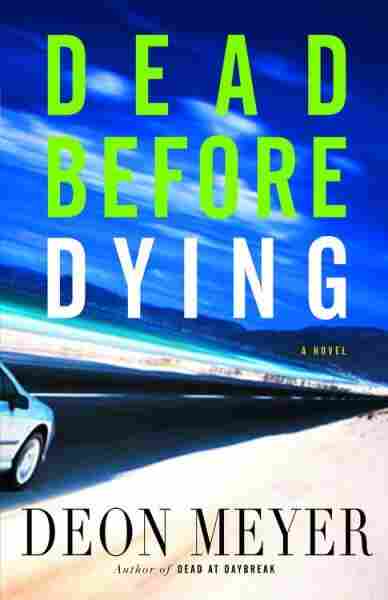