Accessibility links
Thousands Dead in Indonesia Earthquake Central Indonesia is reeling from a major earthquake that hit Saturday. Thousands are dead. Tens of thousands are homeless. The BBC's Orlando De Guzman, who lives on Java, sets the scene for Debbie Elliott.

Central Indonesia is reeling from a major earthquake that hit Saturday. Thousands are dead. Tens of thousands are homeless. The BBC's Orlando De Guzman, who lives on Java, sets the scene for Debbie Elliott. 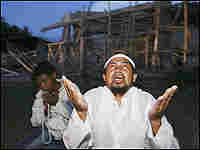 A man prays in front of his wrecked house on the island of Java. Dimas Ardian/Getty Images hide caption 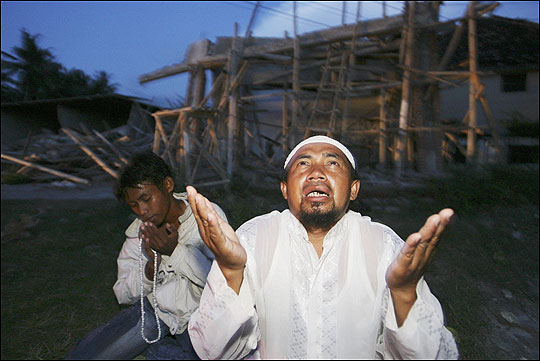 A man prays in front of his wrecked house on the island of Java.

From NPR News, this is ALL THINGS CONSIDERED.

A powerful earthquakes struck Indonesia early this morning, killing more than 3000 people around the city of Yogyakarta. The affected area is densely populated, so the death toll could rise. The quake reportedly destroyed much of the city's historic, ancient architecture.

Yogyakarta's airport was closed, but hundreds of Indonesian Red Cross volunteers were on the scene quickly. I spoke with reporter Orlando De Guzman, who lives in Yogyakarta.

Mr. ORLANDO DE GUZMAN (Local Resident): I was getting out to go exercising early this morning with my wife and as I was about to leave the house, the house just started shaking violently. I was, you know, knocked down and got back up again and ran in the house to make sure that my family was okay, we could all leave the house together.

We did manage to get outside. The earth was still shaking. All of the neighbors were screaming. And it was a very terrifying experience because we didn't know if the house was going to collapse.

And then not long after that, people along the streets began screaming that the water was coming, that there was a tsunami coming. And these were just rumors that spread around because I think a lot of people are still very afraid what happened in Ache not very long ago in December, 2004.

ELLIOTT: Have relief workers been able to reach people yet?

Mr. DE GUZMAN: Yes, most of the roads remain open. I was earlier at the main hospital in Yogyakarta, and there the medics the doctors have had to set up these sort of temporary wards outside in the parking lot. There's just so many people coming in with injuries that the hospitals are just overwhelmed and overflowing with patients needing assistance.

Now Red Cross officials estimate that at least 200,000 people may have been displaced so far.

ELLIOTT: Where do people go for safety when you, you know, the ground is shaking and your house is shaking, what do you do? Where do you go?

Mr. DE GUZMAN: We were all just out in the streets. That's the best we could do, really, was leave our houses. People up to now are still too afraid to go back in their houses. Some just camped out, sleeping out on thin straw mats in front of their houses with a few of their belongings.

ELLIOTT: This is the third major earthquake to hit Indonesia within the last 18 months. How are people there going to cope?

Mr. DE GUZMAN: Well, this an area of the world known as the Ring of Fire, where there's a lot of volcanic activity, a lot of tectonic activity. Here at Yogyakarta there's a very active volcano about 15 miles from where I'm located. And a lot of aid agencies have set up here to respond to this volcanic eruption which has been happening over the past couple of weeks. But now they're turning their attention to the victims of this very powerful earthquake.

ELLIOTT: Orlando De Guzman is a reporter for the BBC in Yogyakarta.

Thank you so much for speaking with us.