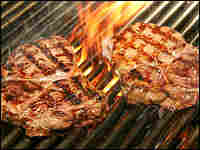 Grilling is more than just dropping food onto a flame and joining the volleyball game for 10 minutes. Scroll down for recipes for spice-rubbed flank steak with Cajun swamp sauce and tuna steak with summer salsa. iStockphoto hide caption

In recent years, gas grills have acquired a cachet not unlike trophy Viking ranges and must-have Sub-Zero refrigerators. There has been a proliferation of barbecue books, magazine articles, barbecue television programs, barbecue Web sites and barbecue restaurants. The country seems to be going up in one big puff of wood-scented smoke.

Buying the right rig for your needs requires a little homework. Today's grills are loaded with special features that you may or may not need: side burners for sauces, rotisseries, smoking capability, storage shelves, heat gauges and enough power to run a small-town diner.

Bryan Miller is the author of 10 books about food and wine, and a former restaurant critic for The New York Times. He lives in New York City.

While simple charcoal grills are fine for most purposes -- some cooks like them because you can toss wood chips onto the flames, which may or may not impart flavor -- gas units get up to speed faster, allow you to adjust heat on different parts of the grate, are easier to clean, and do not reach perfect cooking temperature 30 minutes after you have eaten.

Consumer Reports magazine recently fired up 44 models priced from $100 to $3,200, and found that quality grills can be found in the $200 to $500 range. The magazine cautioned against getting hung up on Btu heat ratings: Tests show that they do not necessarily translate into better performance. (Several grilling experts I consulted suggested that 12,000 to 15,000 Btu's should suffice for most home cooks.)

Other buying tips: look for durable construction, sturdy grill grates, wheels if you need to move it, sufficient cooking surface, a steady side tray for holding food and cutting boards, and an adequate grease tray. Salespeople say that rotisserie units, which are perfect for fowl, are the most popular feature these days.

So, assume you have a shiny new grill. How do you get the best from it? Here are a few pointers:

· Maintain your grill as you would a new car -- well, as some of you would. Keep it clean, both inside (especially the cooking grates) and out, so it doesn't discolor.

· Grilling is more than just dropping food onto a flame and joining the volleyball game for 10 minutes. Some foods benefit from the "direct heat, indirect heat" treatment. For example, a thick steak should be placed over the hottest part of the fire until it chars and develops a nice crust, then moved to a burner on a lower setting to continue cooking without burning. Most medium to large gas grills have two adjustable burners, one left, one right. If using charcoal or wood, move the food to the perimeter of the grate where the heat is less intense. Flip the steak and repeat. Cuts of meat 3/4-inch thick and thinner do not have to be moved because they cook quickly.

· Use long tongs to grasp food and rely on a meat thermometer. Experienced cooks know how to judge the doneness of a steak or thick filet of tuna by pressing them with their fingers. Amateurs should not try to show off this way -- it's safer and more accurate to use a thermometer. Steaks are rare at 145 degrees Fahrenheit, medium at about 160 degrees. Since meat and seafood continue to cook a minute or two after they are pulled from the heat, remove them a minute or so early to assure desired level of doneness.

· Let the meat rest. Sometimes when I am grilling, shortly before the food is cooked, I find myself surrounded by a wolf pack of hungry eaters. Don't give in to the rabble-rousers. When a steak is removed from the fire, it definitely needs a few minutes of downtime for the juices to redistribute.

For more advice, I called one of the country's leading barbecue authorities (read: fanatic -- the guy owns 60 grills), Steven Raichlen, author of 25 sauce-splotched books on the subject. I asked him to identify the three most common errors committed by amateur grill cooks.

"Number one is overcrowding the grill," he said. "The second is confusing burning food with cooking food -- that's where direct and indirect cooking comes in."

Number three: "You should not put on barbecue sauce too early, only in the last few minutes of cooking," he advised, noting that this is particularly critical with a sauce that contains sugar. "It'll burn right up."

Because grilling is a dry-cooking method that extracts water from foods, marinades are beneficial for their moistening and flavoring effects. Contrary to widespread belief, a vinegar-based marinade does not tenderize a steak any more than Kool-Aid does because it barely penetrates the surface. The same is true with seafood. In fact, it generally is not a good idea to marinate fish or shellfish for more than half an hour because the acid can make the surface gray and mushy.

At this time of year, simple marinades can be assembled in minutes using fresh herbs, vinegar, olive oil, lemon, wine, even beer (it's great with shellfish). In the steak recipe below, the meat is rubbed with a slightly spicy combination of dried herbs, so I did not want a very spicy sauce. Based on mayonnaise, it has a kick, though benign. The tuna comes with a vibrant seasonal salsa.

Talking with Raichlen about buying quality grills is somewhat like asking Donald Trump to recommend a cheap, one-bedroom apartment in Manhattan. "There are so many good ones out there for wood and gas," he said.

At the low end, he likes the Bar-B-Chef Texas, by a company called Barbecues Galore. Constructed of cast iron, it burns both charcoal and wood.

Just for fun I asked him what was the biggest, meanest, off-the-charts gas grill in the land.

He described the Kalamazoo Bread Breaker Two Dual-Fuel (they really need to work on these names).

A monster indeed: 500 pounds, burns gas, charcoal or wood, and, if it were a car, would cruise in the wide-load lane. "It's big, stainless steel and all pure performance," Raichlen effused. The price: $11,290. Well, you could always rent it out as a float in the Macy's Parade.

1/2 teaspoon black pepper, or to taste

With a mortar and pestle, mash the garlic and ginger into a paste. (You can use a flat meat pounder or mince very well with a large chef's knife). Add the remaining seasonings. Salt to taste.

Pat the steaks dry with paper towels. Rub the paste all over. Cover in plastic wrap and marinate steak for about 5 hours or, better, overnight.

Oil the grill grates. When the grill is hot, cook the steak for 5 to 8 minutes on each side for medium-rare (depending on thickness). Test with a meat thermometer -- 145 rare, 160 medium. Transfer steak to a cutting board and let stand 10 minutes.

With a very sharp knife slice the steak thinly with the grain and serve.

Combine all ingredients in a mixing bowl and stir. Taste for seasonings. Store in a sealed container -- this will keep for several weeks.

2 chopped scallions (all but 2 inches of the green)

1/2 jalapeno pepper or other hot chili, seeded and minced (or to taste)

4 tuna steaks, about 8 ounces each, about 1-inch thick

Coat the tuna steaks with 2 tablespoons olive oil and season well with sea salt and freshly ground black pepper. (Remove fish from refrigerator about 10 minutes before grilling; it should not be cooked icy cold.)

Grill tuna steaks about 6 inches from the heat, about 4 to 6 minutes per side, depending on thickness. (Check by making a thin incision in a thick part of the flesh). Remove before they reach desired doneness because they will continue to cook a bit.