Accessibility links
Making the Case for a Safer Table Saw Table-saw accidents send more than 60,000 people to seek medical treatment every year, according to federal estimates. In an effort to get the power-tool industry to adopt safer technology, SawStop inventor Steven Gass visited the Consumer Product Safety Commission near Washington recently.

Listen
Making the Case for a Safer Table Saw 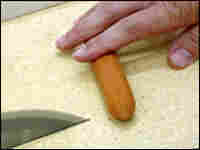 Almost there: A video grab shows a hot dog in peril. Or is it? SawStop hide caption

Table-saw accidents send more than 60,000 people to seek medical treatment every year, according to federal estimates. More than 3,000 of those people suffer amputations, as hobbyists, workers in cabinetry shops, and kids in school shop class cut off their fingers or hands.

Steven Gass is the creator of technology meant to prevent debilitating injuries caused by power tools. His invention can shut down a table saw the instant it touches human flesh. Now, in an unusual move, he's petitioning the Consumer Products Safety Commission to force power-tool manufacturers to use his or similar safety devices.

Watch a video of a hot dog testing the saw's safety:

Gass and his partners have found some success with their company, SawStop, in the past six years. They've sold 2,000 industrial-grade table saws, which the firm says is 10 percent of the market. But despite their product's advances, the broader industry has rebuffed it.

In an effort to get the power-tool industry to adopt safer technology, Gass recenlty visited the Consumer Product Safety Commission outside Washington D.C. There, he said the industry should be required to cut down on accidents.

He also offered the demonstration that gives goose bumps to many who see it. Gass set his jagged SawStop blade spinning so fast it looked like a solid disk. And then, using a hot dog in the place of his own finger, he simulated a work-shop accident, sliding it along the table into the blade.

Sensing that the object had the same electrical signature as a human finger, the saw stopped suddenly as its automatic safety feature kicked in. The hot dog had barely been nicked.

The SawStop is being reviewed by the commission.

Executives in the power-tool industry have told NPR that their companies have had valid worries about SawStop: It would cost tens of millions of dollars for them to re-tool to build saws with the device. And trying it out on one line of saws could create liability problems for their other saws. Consumers might not want to pay for the added cost. Manufacturers said they couldn't risk all that on a new, unproven technology.

Scott Box is a former executive at Delta and WMH Tool Group. He is now with Steel City Toolworks.

But SawStop is hoping that the Consumer Product Safety Commission can help pressure the industry to adopt this kind of safety device.

And something else could bring more pressure sooner: litigation. More injured people are starting to sue the power tool companies, alleging they ignored a viable safety technology.