Accessibility links
Al Gore Sounds Global Warming Alert The new documentary An Inconvenient Truth is an important counterbalance to the misinformation about global warming, say Al Gore and film producer Laurie David. The movie is based on the former vice president's slideshow presentation on climate change. 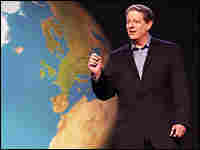 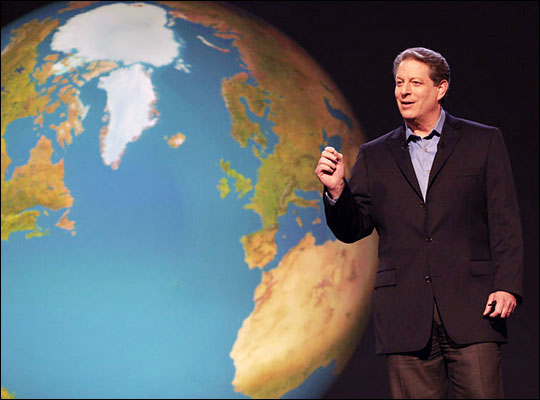 Al Gore's standard lecture on climate change is the starting point for the new documentary, An Inconvenient Truth.

For 30 years, Al Gore has been a student of the climate crisis and an advocate for change in environmental policies. He brings his message to the big screen in a new documentary, An Inconvenient Truth.

The film grew from a slideshow presentation about the problem of global warming that the former vice president has given over the years.

Gore and film producer Laurie David talk to Robert Siegel about the importance of An Inconvenient Truth as a counterbalance to the misinformation about global warming that they say is prevalent today.

Gore also defends the movie's underlying science and says An Inconvenient Truth gives him a stronger platform on the issue of global warming than did his position as vice president or his presidential candidacy. 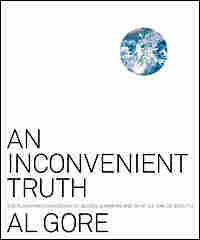 After more than thirty years as a student of the climate crisis, I have a lot to share. I have tried to tell this story in a way that will interest all kinds of readers. My hope is that those who read the book and see the film will begin to feel, as I have for a long time, that global warming is not just about science and that it is not just a political issue. It is really a moral issue.

Although it is true that politics at times must play a crucial role in solving this problem, this is the kind of challenge that ought to completely transcend partisanship.

So whether you are a Democrat or a Republican, whether you voted for me or not, I very much hope that you will sense that my goal is to share with you both my passion for the Earth and my deep sense of concern for its fate. It is impossible to feel one without the other when you know all the facts.

I also want to convey my strong feeling that what we are facing is not just a cause for alarm, it is paradoxically also a cause for hope. As many know, the Chinese expression for "crisis" consists of two characters side by side. The first is the symbol for "danger," the second the symbol for "opportunity."

The climate crisis is, indeed, extremely dangerous. In fact it is a true planetary emergency. Two thousand scientists, in a hundred countries, working for more than twenty years in the most elaborate and well-organized scientific collaboration in the history of humankind, have forged an exceptionally strong consensus that all the nations on Earth must work together to solve the crisis of global warming.

The voluminous evidence now strongly suggests that unless we act boldly and quickly to deal with the underlying causes of global warming, our world will undergo a string of terrible catastrophes, including more and stronger storms like Hurricane Katrina, in both the Atlantic and the Pacific.

We are melting the North Polar ice cap and virtually all of the mountain glaciers in the world. We are destabilizing the massive mound of ice on Greenland and the equally enormous mass of ice propped up on top of islands in West Antarctica, threatening a worldwide increase in sea levels of as much as twenty feet.

The list of what is now endangered due to global warming also includes the continued stable configuration of ocean and wind currents that has been in place since before the first cities were built almost 10,000 years ago.

We are dumping so much carbon dioxide into the Earth's environment that we have literally changed the relationship between the Earth and the Sun. So much of that CO2 is being absorbed into the oceans that if we continue at the current rate we will increase the saturation of calcium carbonate to levels that will prevent formation of corals and interfere with the making of shells by any sea creature.

Global warming, along with the cutting and burning of forests and other critical habitats, is causing the loss of living species at a level comparable to the extinction event that wiped out the dinosaurs 65 million years ago. That event was believed to have been caused by a giant asteroid. This time it is not an asteroid colliding with the Earth and wreaking havoc; it is us.

Last year, the national academies of science in the eleven most influential nations came together to jointly call on every nation to "acknowledge that the threat of climate change is clear and increasing" and declare that the "scientific understanding of climate changes is now sufficiently clear to justify nations taking prompt action."

So the message is unmistakably clear. This crisis means "danger"!

Why do our leaders seem not to hear such a clear warning? Is it simply that it is inconvenient for them to hear the truth?

If the truth is unwelcome, it may seem easier just to ignore it.

But we know from bitter experience that the consequences of doing so can be dire.

For example, when we were first warned that the levees were about to break in New Orleans because of Hurricane Katrina, those warnings were ignored. Later, a bipartisan group of members of Congress chaired by Representative Tom Davis (R-VA.), chairman of the House Government Reform Committee, said in an official report, "The White House failed to act on the massive amounts of information at its disposal," and that a "blinding lack of situational awareness and disjointed decision-making needlessly compounded and prolonged Katrina's horror."

Today, we are hearing and seeing dire warnings of the worst potential catastrophe in the history of human civilization: a global climate crisis that is deepening and rapidly becoming more dangerous than anything we have ever faced.

And yet these clear warnings are also being met with a "blinding lack of situational awareness" -- in this case, by the Congress, as well as the president.

As Martin Luther King Jr. said in a speech not long before his assassination: "We are now faced with the fact, my friends, that tomorrow is today. We are confronted with the fierce urgency of now. In this unfolding conundrum of life and history, there is such a thing as being too late.

"Procrastination is still the thief of time. Life often leaves us standing bare, naked, and dejected with a lost opportunity. The tide in the affairs of men does not remain at flood -- it ebbs. We may cry out desperately for time to pause in her passage, but time is adamant to every plea and rushes on. Over the bleached bones and jumbled residues of numerous civilizations are written the pathetic words, 'Too late.' There is an invisible book of life that faithfully records our vigilance in our neglect. Omar Khayyam is right: 'The moving finger writes, and having writ moves on.'"

But along with the danger we face from global warming, this crisis also brings unprecedented opportunities.

What are the opportunities such a crisis also offers? They include not just new jobs and new profits, though there will be plenty of both, we can build clean engines, we can harness the Sun and the wind; we can stop wasting energy; we can use our planet's plentiful coal resources without heating the planet.

The procrastinators and deniers would have us believe this will be expensive. But in recent years, dozens of companies have cut emissions of heat-trapping gases while saving money. Some of the world's largest companies are moving aggressively to capture the enormous economic opportunities offered by a clean energy future.

But there's something even more precious to be gained if we do the right thing.

The climate crisis also offers us the chance to experience what very few generations in history have had the privilege of knowing: a generational mission; the exhilaration of a compelling moral purpose; a shared and unifying cause; the thrill of being forced by circumstances to put aside the pettiness and conflict that so often stifle the restless human need for transcendence; the opportunity to rise.

When we rise, we will experience an epiphany as we discover that this crisis is not really about politics at all. It is a moral and spiritual challenge.

Reprinted from An Inconvenient Truth: The Planetary Emergency of Global Warming and What We Can Do About It by Al Gore. Copyright (c) 2006 by Al Gore. Permission granted by Rodale. 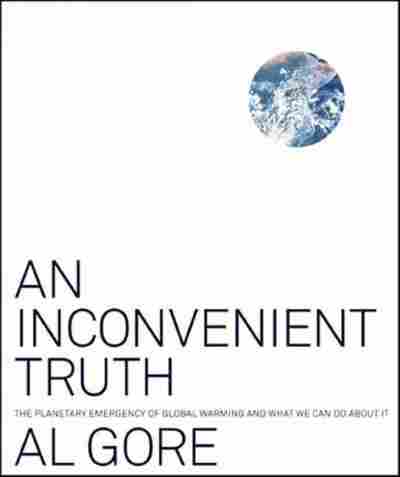