Accessibility links
Barbaro Stabilizes, but His Future Is Uncertain Dr. Dean Richardson, the horse surgeon that operated on Kentucky Derby winner Barbaro after his devastating injury in the Preakness Stakes on May 20, has been optimistic about Barbaro's progress in the past week but says he is still wary of his future as a stud. Breeding Barbaro in the future would require that he mount mares using his injured hind leg. Melissa Block talks with Richardson.

Listen
Barbaro Stabilizes, but His Future Is Uncertain

Dr. Dean Richardson, the horse surgeon that operated on Kentucky Derby winner Barbaro after his devastating injury in the Preakness Stakes on May 20, has been optimistic about Barbaro's progress in the past week but says he is still wary of his future as a stud. Breeding Barbaro in the future would require that he mount mares using his injured hind leg. Melissa Block talks with Richardson.

And I'm Melissa Block. It has been 10 days now since doctors operated on Barbaro. He is the thoroughbred who was favored to win the Preakness and perhaps the Triple Crown, but then suffered a devastating injury to his right hind leg early in the race. After the operation on Barbaro at the University of Pennsylvania's New Bolton Center, the chief of surgery, Dr. Dean Richardson, said the horse's chances of survival were 50-50. Dr. Richardson joins us now for an update on how Barbaro is doing. And Dr. Richardson, is he doing better chances than 50-50 now?

DEAN RICHARDSON: Well, everyday that goes by certainly improves his chances. I would say that, given we're 10 days out, my opinion is that his prognosis has definitely improved from the day immediately following surgery. There are certain types of complications that tend to occur most frequently in the first several days after surgery, and certainly within the first two weeks. And probably the most important of those is that devastating infection usually starts to show within the first two weeks. And then fact that he's shown no signs thus far of any problems in that regard is very encouraging.

BLOCK: What are the medium term or maybe long term problems that you'd be looking for, assuming that he does get past this first phase here?

RICHARDSON: Well, horses are variable in how well they will wear their casts, and how comfortable they'll stay on the cast limb. And right now, couldn't really ask him to be walking on that any better than he presently is. So if he stays that comfortable, that's a huge advantage for us, because it allows us to be less worried about him laminitis in the opposite foot. That's the number one complication that we're still concerned about, is that he could break down in the opposite hind foot if he starts to get uncomfortable in his fractured limb.

RICHARDSON: Oh, of course. Yeah. I see him a few times a day, everyday. I'm usually there quite early and check him early - plus, I have a very experienced staff that's looking at him all day as well.

BLOCK: I'm curious if you're able to gauge Barbaro's mental state in anyway, just as you're keeping track of how he is doing physically. Can you tell at all how he's doing in his head?

RICHARDSON: Yes, you can certainly tell when a horse like that is happy and comfortable whether or they're eating, whether or not they're - you know, if you go to the stall, he turns right around and comes to you. If there's other horses that are out making any noise, he goes right to the front and looks out there and is trying to meet up with them. It's really not much different than a human in the sense that - if they're interested in their surroundings and they're eating and all their vital signs are normal - then you've got a fairly happy horse.

BLOCK: When you think Barbaro's future, his racing career is definitely over with this injury, and I guess the idea now would be can he be a stallion? Can he be a stud horse?

RICHARDSON: That's correct. That still remains to be seen. I mean, there's a lot of people who doubt that he will comfortable enough to act as a, you know, thoroughbred stallion where they have to breed the mares naturally. So he has to get up on his hind legs comfortably. But the fact of the matter is, in horses with these types of injuries, it tends to be sort of an all or none thing. My guess is that he will, if he's good enough to live a happy life, he's probably to feel good enough to breed mares. Libido is a wonderful thing in terms of, you know, motivation. I think if he gets to the point of where he can get around the field, he probably will be feeling good enough to get up to breed a mare.

BLOCK: Libido is a wonderful thing. I think many in our audience would agree with you on that one.

BLOCK: Well, Dr. Richardson, thanks for talking with us today and giving us an update on your most famous patient there.

RICHARDSON: Thank you very much for asking me.

BLOCK: Dr. Dean Richardson. He's Chief of Surgery at the University of Pennsylvania's New Bolton Center, where they're taking care of Barbaro as he recovers after surgery. 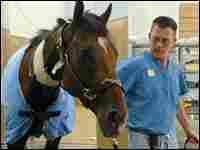 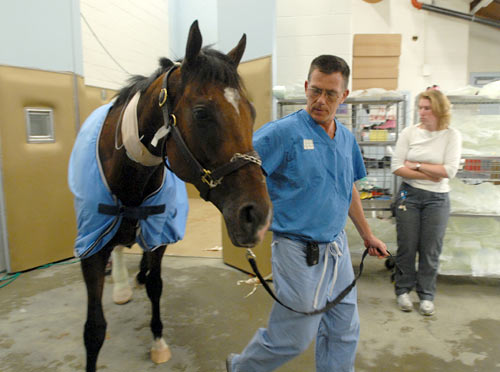 Dr. Dean Richardson, chief of surgery at New Bolton Center, leads Barbaro back to his stall after hours of surgery.

Julie Rovner is an NPR health policy correspondent and a longtime horse owner. She visited the University of Pennsylvania's New Bolton Center on Tuesday to see how large-animal veterinary care has advanced to even attempt to save a horse with an injury as severe as the one Kentucky Derby champion Barbaro suffered in the Preakness. She describes Barbaro's care and the outlook for his recovery.

Q: What was the extent of Barbaro's injury?

About 50 yards into the start of the Preakness, Barbaro took a bad step and fractured three separate bones in his right hind leg -- the cannon bone, the long pastern, and the sesamoid. He also dislocated the fetlock joint, which is equivalent to a person's ankle.

Q: Why was he taken to the New Bolton Center?

The center is, in fact, the closest major equine hospital to Pimlico racetrack in Baltimore, where the injury occurred. But Barbaro's owners, Roy and Gretchen Jackson, also have a long association with the facility. Both are University of Pennsylvania graduates; their farm is about 10 miles from New Bolton; Gretchen Jackson serves on the veterinary school's board of overseers, and New Bolton's equine sports medicine clinic is named for Roy Jackson's mother and stepfather.

Q: What was done for Barbaro there?

On Sunday, Barbaro underwent about four hours of surgery in an attempt to stabilize the extensive fractures. New Bolton Chief of Surgery Dean Richardson inserted a locking compression plate and about 27 titanium screws (Richardson told reporters Tuesday that he had misspoken Sunday when he said he used 23 screws).

After the surgery, the still-unconscious Barbaro was then placed in a sling suspended from a monorail on the ceiling and moved to a "wake-up pool" next door. There he was lowered into a black rubber raft with individual full-length "pockets" for each leg, which was, in turn, lowered into the pool. The pool allowed him to thrash as he awoke from anesthesia without re-injuring the surgically repaired leg or injuring another part of his body.

Once awakened and calmed, Barbaro was moved in the sling to a padded recovery stall and then to a more permanent stall in the adjacent intensive care unit, where he is likely to remain for some months.

Q: How much does this sort of surgery cost?

Vets have been coy on that subject, but surgeon Dean Richardson did concede that the care will cost "in the tens of thousands of dollars," which does not necessarily include all the long-term nursing and rehabilitation costs, assuming Barbaro survives.

Q: Given the cost, how often is this type of surgery performed?

Richardson said such complicated surgery, while not routine, is not reserved exclusively for high-value horses such as Barbaro. "We did a somewhat similar procedure, actually, just a couple weeks ago on a gelding," a neutered male horse, he said. "They're not being saved just for monetary purposes. People love their animals."

Q: What kind of advances in veterinary medicine make it possible to do this kind of surgery now that made it impossible in the past?

Q: Why are the vets still so guarded about Barbaro's prognosis?

Horses are prey animals that basically need to move around in order to survive, and Barbaro is currently confined to a stall where he is likely to have to stay for weeks, if not months. Beyond the always-present possibility of infection in a wound so large, the biggest concern is laminitis, a painful and sometimes fatal condition that can develop when a horse stands unevenly because it is favoring one leg. In an attempt to prevent laminitis, Barbaro's good hind leg has been fitted with a specially padded, glue-on shoe, to allow him to stand evenly with the bad leg, which has a cast on it.

Another major concern is colic, also a potentially fatal condition that develops when the horse's intestinal system slows or becomes blocked. The need for the horse to keep weight on its feet and the potential for colic is a major reason a horse with a broken leg can't simply be suspended from a sling while the injury heals, says vet school dean Hendricks.

"You can't take the weight off their feet and you also can't put the sling around their abdomen because their intestines are as delicate as their toes.

Veterinarians are also worried that a horse as young and fit as Barbaro may simply become unable to tolerate such a lengthy confinement. Hendricks says "keeping, in this case. a very smart... juvenile critter whose life is racing, and now he's in a small stall" is not easy. Although Hendricks is quick to add that so far, things are going well. "He's being entertained, I have to say, he likes what's going on around him. He watches and he's eager to see people, which is really great."

Q: If Barbaro survives but his leg is not strong enough to allow him to breed naturally, can he breed by artificial insemination?

No. While artificial insemination is common in the world of sport horses, the Jockey Club, which regulates racing thoroughbreds, requires that all breeding be done "naturally." That means Barbaro's leg must heal well enough for him to be able to mount a mare, or he will not be able to sire horses eligible to race.