Accessibility links
Senegal's Cheikh Lo Brings 'Lamp Fall' Cheikh Lo is from Senagal, but his music is steeped in rhythms from all over the world. In fact, many of the rhythms for his new CD came from work he did in Brazil with producer Nick Gold, known for his work with the Buena Vista Social Club.

Cheikh Lo is from Senagal, but his music is steeped in rhythms from all over the world. In fact, many of the rhythms for his new CD came from work he did in Brazil with producer Nick Gold, known for his work with the Buena Vista Social Club. 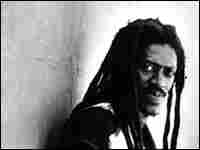 Big dance bands were once the powerhouses of African pop music, but these days, solo singers with spare ensembles or rappers are more then norm. Senegal's Chiekh Lo falls somewhere in the middle. He hasn't abandoned the punch of a live band, but he's still able to innovate. His new CD is called Lamp Fall, and our critic, Banning Eyre, has a review.

BANNING EYRE: Chiekh Lo has a voice that can move from a prescient whisper to a searing gut cry. He's also an ecliptic composer and arranger who tries new ideas on every song. Best of all, Lo knows how to keep things real among his musicians. Listen to the rhythmic tension his band creates as each player to tugs the feel in a slightly different direction.

EYRE: That's Lamp Fall, a praise song to an African mystic - a Sufi saint that prays with jazz and funk overtones. Lo has never confined himself to a national, ethnic, or genre niche. He grew up in the West African savannah, but made his career in Senegal's cosmopolitan capital, Dakar. Lo pays his dues to local Senegalese's genres but he's also mad about dance music from Cuba and Congo, the musical powerhouse of Central Africa. With such a broad musical vocabulary, Lo is known for making his musicians stretch. When his band reinvents a classic Ghanaian song with Senegalese and melodious accordion, you can feel the musicians working through his multi-layered ideas.

EYRE: Lamp Fall took years to make, partly because Chiekh Lo and his producer Nick Gold of Buena Vista Social Club fame kept demanding more from the music. After they'd recorded in both Senegal and England, Gold suggested they take the tracks to Bahia, Brazil, to the studios of Carlinhos Brown. Brown is another musical visionary, known for bridging Afro-Brazilian roots with up-to-date aesthetics. He and Lo clearly hit it off. On one of this album's sparest tracks, Lo composes Senegalese percussion and Brazilian choral music.

EYRE: Lamp Fall is an elaborate and painstakingly produced album, but miraculously, it all sounds like it was performed in the heat of one revelatory moment. That's what sets it apart in this era of production gimmickry and cross-cultural fusion. Lo wants it all. The big cross-genre ideas and the in your face band chemistry. He pulls it off on Lamp Fall and proves himself one of the most dynamic creators in today's African music.

SIEGEL: The music is from Chiekh Lo. Our reviewer, Banning Eyre, is senior editor at AfroPop.org.