Accessibility links
Envoy: Afghan Riots Not Sign of Anti-Americanism Deadly riots sparked by a U.S. military truck crash this week are not a sign of anti-Americanism in Afghanistan, the U.S. ambassador in Kabul says. 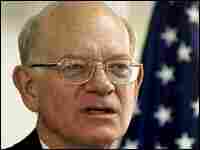 Ambassador Ronald Neumann compares the insurgencies in Afghanistan and Iraq.

Deadly riots sparked by a U.S. military truck crash this week are not a sign of anti-Americanism in Afghanistan, the U.S. ambassador in Kabul says.

"I do not see any groundswell of anti-Americanism or of any desire that we leave," Ambassador Ronald Neumann says in an interview.

The U.S. military says a large truck, part of a convoy on the outskirts of Kabul, plowed into a line of cars after its brakes failed, killing up to five Afghans.

Ivan Watson reports on the resurgence of the Taliban in southern Afghanistan. Hear his report and read interviews with some victims of the violence.

Taliban Making a Comeback in Afghanistan May 31, 2006

The Afghan parliament on Tuesday demanded prosecution of U.S. soldiers involved in the truck accident.

American soldiers in Afghanistan are not subject to Afghan law, Neumann said. "But should the investigation reveal some wrongdoing, I'm sure that the military would follow up on its own."

A U.S. military spokesman said Wednesday that American soldiers used their guns in self-defense after rioting Afghans opened fire during a melee that broke out after the crash.