Accessibility links
Life After Foster Care: A Tale of Two Boys In 1994, Tovan Love and Troy Saunders were teens at a group home in Washington, D.C. They were filled with optimism about the future. Twelve years later, we report on what happened to the young men -- and their dreams.

Listen
Life After Foster Care: A Tale of Two Boys 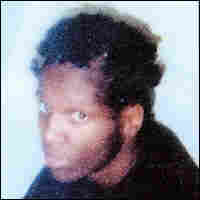 This is the only photo of Troy Saunders his family had. It appears on a bookmark that was used at his funeral. Courtesy Barbara Saunders hide caption 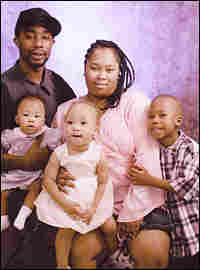 Tovan Love and his wife Aisha with their two daughters, 1-year-old Sheilaya and 2-year-old Shayvon, in 2005. Trevon, 5, is Aisha's son from a previous relationship. Courtesy Tovan Love hide caption 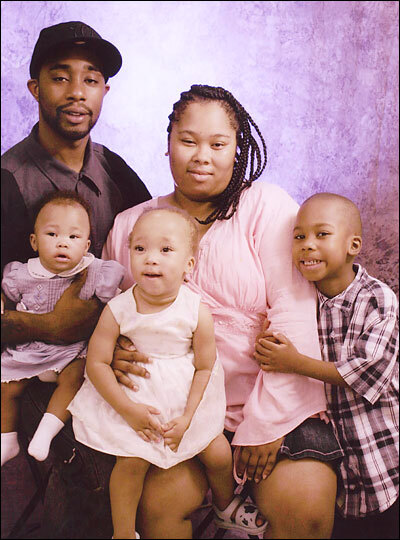 Tovan Love and his wife Aisha with their two daughters, 1-year-old Sheilaya and 2-year-old Shayvon, in 2005. Trevon, 5, is Aisha's son from a previous relationship. 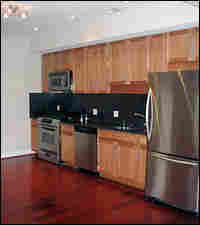 The group home where Tovan and Troy lived has been converted into luxury condominiums. Julia Buckley, NPR hide caption

The 1994 story for which I interviewed Troy Saunders, Tovan Love and several other children in foster care was occasioned by two developments.

First, Newt Gingrich, who had just led the Republican Party to a majority in the House of Representatives, had recently voiced approval of orphanages, provoking much hostile reaction. In fact, thousands of youths in Washington and elsewhere were living in group homes that approximated orphanages; I was curious about the lives kids led there.

Second, the child-welfare system of Washington, D.C., was uniquely dysfunctional. This year, in reporting on Troy's and Tovan's difficult lives after foster care, I also interviewed several people about the state of Washington's system today. — Robert Siegel

In the course of reporting, you meet a lot of people. You talk for an hour or two, you learn a little bit about them and you move on. And sometimes you wonder, years later, what became of them.

For me, it happened a few months ago, when I became curious -- for reasons I can't fully explain -- about the lives of two 13-year-olds I had interviewed in 1994.

Tovan in His Own Words

"Where I grew up... I didn't have nobody to look over me. I was taking care of my brothers and sisters."

"The only thing in the refrigerator was a couple of potatoes."

"I would like to be adopted or just plain foster care."

"I miss those times. I had it so easy back then."

"I had hope back then. I guess I lost hope. I can't really tell you when I went wrong."

"I wish I would've never been adopted out of the group home. I wish I'd stayed in the system a little longer."

Troy Saunders and Tovan Love were roommates in a small group home for foster children in Washington, D.C.

Troy in His Own Words

"Life can't get no better than this."

"If I can't live with my mother, I'd rather stay in the group home."

They had a lot in common. Both of their mothers were addicted to crack cocaine. Both mothers had children by several different men. Both failed to provide for their young sons.

So Troy and Tovan both entered the disaster that was the Washington foster-care system. It was so bad at the time that it was taken over by a federal judge.

But their group home was a rare showplace. It had eight boys and ample staff. Although it was in a sketchy neighborhood, it was a well-run temporary home.

These two kids -- both 13 years old in 1994, both separated from their families, troubled and already acting up -- told me with astonishing innocence and optimism about their lives in the group home and what their lives were like before they got there.

I wondered what happened to them after that and what they made of their years in foster care.

Through various database searches, we first found news of Tovan, and then of Troy.

And the news wasn't good.

Last month, we tracked down Troy's mother, Barbara Saunders. She was in a D.C. prison, serving time for possession of crack cocaine with intent to sell.

She says she's now clean and looking forward to helping raise her grandchildren. At 41, she's also the mother of eight. She tells us about what happened to Troy.

Shortly after we met the teen in 1994, Troy won a scholarship to attend a boarding school for gifted basketball players in upstate New York.

Homesick, Troy dropped out before completing his first year. He returned to D.C. to live with his uncle, Mark Hill -- who at 23 was barely an adult himself.

Eventually, Troy dropped out of high school, worked for a time and settled down with a woman named Diane Towles, who had a child from a previous relationship.

On Feb. 24, 2006, a month shy of his 25th birthday and just a few weeks before we had made contact with his family, Troy Saunders died from complications of AIDS.

His girlfriend is also HIV-positive. Troy was sick first, she says.

Two years ago, knowing they both have the disease, the couple decided to have children. The younger of their two sons was born in January, several weeks before Troy's death.

It's too early to know whether the newborn has the disease. The other child is HIV-negative.

And what happened to Troy's roommate from the group home back in 1994, Tovan?

When we caught up with Tovan Love again, he was in a D.C. jail, awaiting trial for a weapons charge and possession of marijuana with intent to distribute.

In a jailhouse interview, Tovan brought us up to date on his story. He says that in 1996, his mother died of AIDS and crack-cocaine use. Shortly after his mother's death, the supervisor of the group home where he and Troy Saunders lived adopted him.

But by 17, Tovan was a high school dropout. He was kicked out of his adopted family's home and was on the streets, selling and using drugs.

Today, Tovan is married and the father of three. He has a drug habit. He likes to smoke marijuana and occasionally PCP.

His adopted father is still in his life and says he continues to have high hopes for the young man.

For his part, Tovan says, the drive and optimism that was so clear when he was 13 is now lost.

At last word, his wife Aisha says Tovan has become abusive, and the D.C. Superior Court has ordered him to stay away from her. But he still can see his children.

As for the group home, it's been sold. The once-rough neighborhood has been gentrified. The building has been renovated -- turned into luxury condos -- each selling for more than a half-million dollars.