Accessibility links
Life Along the U.S.-Mexico Border Robert Siegel visits the communities of Del Rio, Texas, and Ciudad Acuna in Coihuila, Mexico, to find out how the national debate on immigration plays at the border. The two towns straddle opposite sides of the Rio Grande -- and are linked by language, history and commerce.

Listen
Life Along the U.S.-Mexico Border 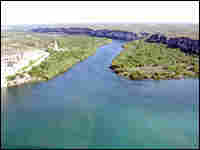 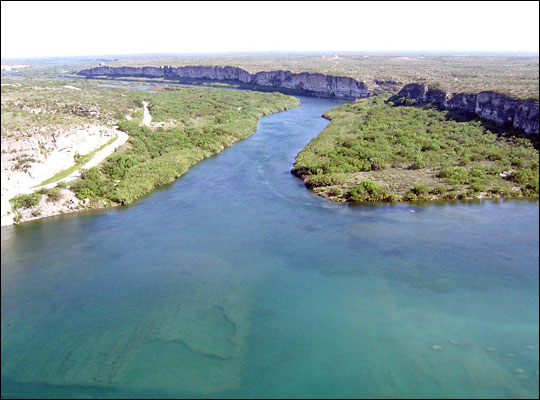 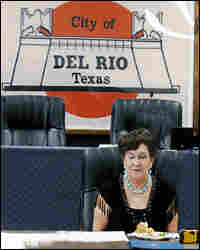 Until recently, Dora Alcala was mayor of Del Rio, Texas. Behind her is the symbol of the city: a bridge. Art Silverman, NPR hide caption

People who live along the U.S.-Mexico border will tell you things are different there.

"People decide in Washington, D.C., and Mexico City, and they don't know anything about the border," says businessman Roberto Garza Crosby.

One example of the difference is Garza Crosby himself. He is a graduate of Texas A&M University. But he is Mexican, not American.

The Rio Grande separates Del Rio, Texas, from Ciudad Acuna, in Coahuila state, Mexico. But, fittingly enough, the symbol of Del Rio is a bridge that goes over that river.

"We always say if Del Rio catches a cold, we sneeze, or if we sneeze, they catch a cold. We're interrelated," says Acuna rancher and bar owner Jaime Garza.

It's an equally popular saying across the border in Del Rio. Americans with and without insurance head south for health care and for a variety of goods and services that are cheaper in Acuna than in Del Rio.

And residents of Coahuila state cross the other way to shop at Wal-Mart and other outlets that offer lower prices than Mexican stores on other goods.

Not surprisingly, attitudes toward the immigration debate and arguments over tightening controls at the border are complex among residents of Del Rio and Acuna.

In December 2005, the region became the model for tighter border enforcement. Under Operation Streamline, Central Americans who enter illegally through Mexico, as well as Mexicans, are all detained and charged with illegal entry.

Agent Hilario Leal, spokesman for the U.S. Border Patrol, says there have been nearly 5,000 convictions since the start of Operation Streamline, compared to 1,700 for all of 2005.

One result of this operation is a huge increase in the dockets at the federal courthouse in Del Rio.

The theory that's driving these criminal trials is that it will send a message to Mexicans and other would-be migrants: Enter illegally in the hopes of making money and instead you will spend at least 15 days in jail, make nothing, and then be deported. President Bush wants the program expanded along the length of the border.

Will it actually work?

The 5,000 arrests since December represent a total for less than one year, in less than 200 miles of a 2,000-mile border. If you do the multiplication on the numbers of jail beds, and the number of prosecutors working on nothing but illegal-entry cases, plea bargains and deportations, the task becomes mammoth -- and expensive.

It's unclear which will prove more powerful: the money that Washington will put into that effort or the money that draws job-seekers north, across the border.