Accessibility links
A Falcon Lands on a Sea Otter -- in Space A Japanese spacecraft has landed on an asteroid as it hurtles through space. From a distance, the Itokawa asteroid had been compared to a potato, with oblong, rounded ends. But upon closer inspection, Japanese scientists say Itokawa looks more like a sea otter.

A Falcon Lands on a Sea Otter -- in Space

Listen
A Falcon Lands on a Sea Otter -- in Space

A Falcon Lands on a Sea Otter — in Space

A Falcon Lands on a Sea Otter -- in Space 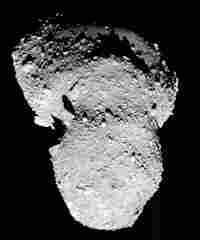 The Itokawa asteroid viewed from the direction of its longest axis. Click for an alternate view and more details. JAXA/Science hide caption

The Itokawa asteroid viewed from the direction of its longest axis, left; and an image taken at 7km altitude on Oct. 18, 2005. Width of sight is 600m. Muses Sea and Sagamihara are boulder-free areas with relatively small, uniformly sized particles.

A Japanese spacecraft has kept its rendezvous with an asteroid, following several failed attempts to land on the rock hurtling through space. Launched three years ago, the Hayabusa craft has now touched down on the surface of the near-Earth asteroid Itokawa three times.

After its second landing in November 2005, Hayabusa suffered a fuel leak that led to a loss in communication. Contact was re-established in January. The visits to Itokawa have shown that the asteroid isn't a solid rock, as scientists had believed. Rather, it's a bunch of rubble being held together by shared gravity.

The asteroid, with its oblong, rounded ends, had been compared to a potato. But upon closer inspection, Japanese scientists say Itokawa looks more like a sea otter. With the asteroid's composition ranging from large boulders to pits of gravel-like particles, researchers say they can make out what looks like a small "head" and larger "body" of a sea otter-like figure.

The recent animal comparisons are not the first in this mission. In Japanese, "Hayabusa" means "falcon."