Next month, Cory Booker will officially become mayor of New Jersey's largest city, Newark. The 37-year-old Rhodes Scholar will have some monumental challenges to address. 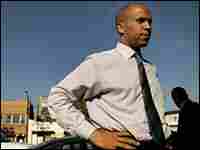 Note: Video contains language that some viewers may find offensive.

Newark has been called the poorest city of its size in the United States, after Miami. The city's schools, already taken over by the state, are said to be barely functional, and crime is rampant.

But Booker, a former city councilman, has already been tested by fire in another way. It took him two campaigns to win the office. His first try in 2002, against incumbent Mayor Sharpe James, was called one of the nastiest contests in American politics.

Both Booker and James, the longest-serving mayor in the city's history, are Democrats and African American -- but that didn't stop James from making personal attacks against his opponent. The climate became so heated that the federal government sent in observers to watch for cheating and violence.

That election was captured in an Oscar-nominated documentary Street Fight, which portrays Booker as a young, idealistic politician pitted against an entrenched, old-school political machine that used any means necessary to crush opponents.

For the 2006 race, however, James pulled out of the race, saying he wanted to focus on his other elected position as a New Jersey State Senator. Booker easily bested his new opponent, state Sen. Ronald Rice.

More on 'Street Fight' at PBS.org