Accessibility links
Turning Back Time and the Tide The deluge of songs immortalizing the wrath of Hurricane Katrina continues with the release of a collaboration between Elvis Costello and legendary New Orleans musician Allen Toussaint. The delivery is mostly coy and cool, the groove a classic example of Toussaint understatement.

Turning Back Time and the Tide

Turning Back Time and the Tide

Putting the River in Reverse

The deluge of songs immortalizing the wrath of Hurricane Katrina continues this week, with the release of a long-awaited collaboration between Elvis Costello and legendary New Orleans keyboardist, songwriter and producer Allen Toussaint. You're not necessarily a victim of compassion fatigue if you approach this one with less than eager anticipation: For all the ravaged city's musical riches, the songs recorded in the disaster's aftermath have tended toward the obvious and slapdash. 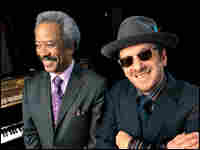 Not this one. Costello is a quick musical study: For The Delivery Man, he assimilated the fine points of Memphis soul as if he'd been singing it for decades. Here, he cops a touch of grease -- essential to New Orleans R&B -- but wisely doesn't try to sound like a native son. It helps that what he's singing is pure genius: Costello's lyrics offer scattered spooky images rather than a laundry list of grievances, a recognition that in the face of biblical circumstances, the far-flung metaphor can communicate what the journalistic account might miss.

The delivery is mostly coy and cool, the groove a classic example of Toussaint understatement cut with a hint of Dr. John's swamp-psychedelic classic Gris Gris. The connection to the city is established before Costello gets busy, and when he cries, "There must be something better than this," his indignant tone speaks for everyone horrified by the aftermath of the crisis. "What do we have to do to send the river in reverse?" Costello wants to know, transforming a literal question for New Orleans into an equally important metaphysical question for everyone else.