Accessibility links
'Continuous Contraception' May Banish Periods For women who use birth control, there's growing popularity for what's called "continuous contraception," a practice that can suppress the menstrual cycle so that it can happen only once a year. 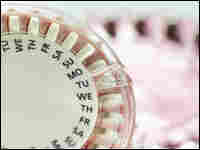 For women who use birth control, there's growing popularity for what's called "continuous contraception," a practice that suppresses the menstrual cycle so it happens only once in three months, four months, or even a year or more.

Contraception on the Web

Risks and Benefits of Suppressing Your Period

A fact sheet from the National Women's Health Network provides information on the efficacy, benefits and risks of suppressing menstrual periods using either regular or extended-cycle oral contraceptive pills. It includes interesting information on the relatively new pill, Seasonale, which limits women’s menstrual periods to only four a year. For example, the drug was approved on the basis of a clinical trial which had data on less than 300 women, because many women withdrew their participation before the end of the study.

The Association of Reproductive Health Professionals' contraception resource center provides readers with detailed information on contraception, menstrual suppression and how different contraceptives act on the body to control menstrual periods and pregnancy. AHRP also has an interactive Web tool that provides personalized suggestions for effective birth-control options for men and women.

University of Washington OB/GYN Dr. Leslie Miller's Web site, www.NoPeriod.com, has answers to frequently asked questions about stopping periods through use of the pill, women's stories and other resources about menstrual suppression.

Heidi Matari is one of those women. She's 28, lives in Seattle, is single and works in health research.

And the next month, Matari does the same thing. She's been doing this for about six years. Not only is it effective birth control, but it's reduced the uncomfortable symptoms, such as cramps and bloating, that accompanied her monthly periods. Matari says she doesn't miss that aspect of her period at all.

"I don't think I ever really enjoyed getting my period before, so I don't miss it now," she says, adding that for some people who truly feel that their period is a positive thing, this might not be the "right choice." But for her, she says, "it's perfect."

Matari learned about the notion of so-called "continuous contraception" when she worked in health research for Dr. Lesley Miller, an obstetrician/gynecologist at Seattle's Harborview Medical Center and professor at the University of Washington.

Matari also used to be one of Miller's patients. Miller says more and more of her patients, like Matari, are choosing to take birth-control pills every day of the month, and therefore miss their periods altogether.

"It's sort of an extra bonus in addition to birth control," says Miller.

Continuous contraception works the same way as the 21 days on/seven days off cycle. It stops the body's monthly preparation for pregnancy by lowering the production of hormones that make pregnancy possible.

"During a natural menstrual cycle," says Miller, "hormones like estrogen and progesterone will vary ten-fold in concentration from week to week. So, when a woman says she feels different, there's a good reason. Estrogen may be 10 times higher than the week before.

When hormone production is lowered every day, there is no buildup of the uterine lining, and therefore, no need to shed it. Hence, no bleeding.

The Marketing of Periods

These periods are considered artificial because they're not shedding an unfertilized egg along with the uterine lining. And monthly bleeding, says Segal, "was actually a marketing decision made decades ago when the pill was developed.

"Marketers at the manufacturing company which developed the pill," says Segal, "felt at the time that an oral contraceptive might or might not be accepted by the public. These were very different times. Not only was this the first oral contraceptive but it was the first medication given to healthy women for any purpose at all."

Taking away ovulation and imposing synthetic hormones was already a big change, and apparently marketers felt it might be too much to also take away monthly periods.

"You have to remember also that this was a time before drugstore pregnancy tests, so that if a woman was not bleeding, having a regular menstrual period, she wouldn't know for sure whether she was pregnant or not," says Segal.

"Such anxiety about unintended pregnancy was another reason why marketers felt it was better to have one week off, to allow this artificial menses to occur," he explains.

Then, there was one more reason. The co-inventor of the pill, John Rock, was a devout Catholic. He felt that if the Catholic Church were to accept this new method of birth control, it would have to appear as normal or natural as possible.

Rock spoke with clergymen and they decided that an oral contraceptive could be accepted by the church if it didn't interfere with a fertilized egg and if the cycle appeared natural.

What all this has meant, however, is that women who choose oral contraception have lived for decades with decisions that had nothing to do with science or health.

And, ironically, Segal says, it's not all that natural to menstruate as much as women today do anyway. The average American woman has 450 periods during her lifetime. Throughout most of human history, he says, women menstruated a lot less.

"Over the millions of years going back to the Stone Age, the usual pattern was for young females moving around in nomadic tribes, always exposed to males, to become pregnant as soon as she showed the first signs of sexual maturity."

And maybe even without ever having her first menses even occurring, he adds. Typically these young women spent their years either pregnant or lactating, which means they did not menstruate, and sometimes even pregnant and lactating, for the rest of their lives. "And this went on for millions of years," says Segal.

Segal says there are studies that indicate a correlation between the number of menstrual cycles a woman has in her lifetime and the incidence of ovarian, endometrial and breast cancer.

"The greater number of periods she has", he says, "the higher the incidence of those cancers." Segal says that reducing the number of menstrual cycles over a lifetime could actually have a very positive health benefit.

Dr. Kirtly Parker Jones, an OB/GYN at the University of Utah, says that for years, physicians have controlled their own menstruation.

"In fact, I just did an exam for a female OB/GYN today," says Jones, "and I asked her when her last period was and she said, 'Hmmmm. I don't know, three years ago, maybe. I only have periods when I'm trying to get pregnant and if I'm not having babies then I don't have my periods.' "

Jones says taking birth-control pills continuously throughout the month carries the same risks as taking it for just three weeks.

In rare instances, women suffer blood clots, stroke or heart attack. Women over 35, smokers and those with high blood pressure are at greater risk.

It's important to note that there are no long-term studies looking at the health risks, if any, of taking birth control pills for more than one year. Segal says that's unrealistic because "it would require women to promise not to have babies for three, five, even 10 years."

But from close observation, Jones says the evidence is powerful that birth-control pills -- either 21 days on/seven days off, or continuous -- are safe.

"Remember we've had pills for 40 years," says Jones. "At any given time, about 30 percent of women of reproductive years are taking hormonal contraception. That's a lot of information."

While studies have shown that hormonal contraception is highly protective against uterine and ovarian cancer, less is known about breast cancer. Even so, Jones say early data from women now in their 60s who took the pill during their reproductive years indicates no increased risk of breast cancer later in life.

Meanwhile, the FDA is expected to shortly have some answers to an application from Wyeth Pharmaceuticals to market the first oral contraception intended to be taken every day of the month.

The medication is likely to be packaged similar to traditional cyclic birth control, with days of the week noted on a round plastic dial.