Accessibility links
Zarqawi's Death Brings Positive, Cautious Reactions U.S. and other world leaders had cautiously positive reactions to the Wednesday's death of Jordanian terrorist Abu Musab al-Zarqawi. The multiple groups of insurgents and political complexities in Iraq will continue to plague the U.S.-led military mission there, officials and analysts say. 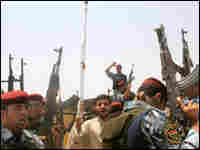 Iraqi police jubilate in the southern city of Basra after hearing about the death of Abu Musab al-Zarqawi. Essam Al-Sudani/AFP/Getty Images hide caption 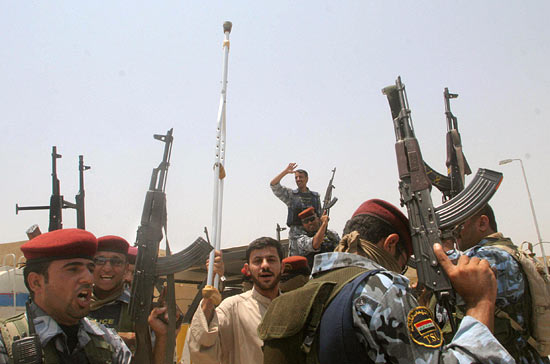 Iraqi police jubilate in the southern city of Basra after hearing about the death of Abu Musab al-Zarqawi.

U.S. and other world leaders had cautiously positive reactions to the Wednesday death of Jordanian terrorist Abu Musab al-Zarqawi. The multiple groups of insurgents and political complexities in Iraq will continue to plague the U.S.-led military mission there, officials and analysts said.

Below is a sampling of reactions to Zarqawi's death, from the United States, Iraq and elsewhere:

President Bush: "Zarqawi's death is a severe blow to al-Qaida. It's a victory in the global war on terror, and it is an opportunity for Iraq's new government to turn the tide of this struggle…

"We have tough days ahead of us in Iraq that will require the continued patience of the American people. Yet the developments of the last 24 hours give us renewed confidence in the final outcome of this struggle: the defeat of terrorism threats, and a more peaceful world for our children and grandchildren."

British Prime Minister Tony Blair: "Today's announcement was very good news because a blow to al-Qaida in Iraq is a blow against al-Qaida everywhere."

Defense Secretary Donald Rumsfeld: "I think arguably over the past several years no single person on this planet has had the blood of more innocent men, women and children on his hands."

U.S. Ambassador to Iraq Zalmay Khalilzad: "Today the Iraqi government also appointed key ministers. Now the government is completed. It can begin to put forward proposals to bring Iraqis together, for Iraqi community leaders to take responsibility for ending sectarian war. The combination of this blow [Zarqawi's death] as well as this unity government with a good program could have a positive effect in terms of winning some people over to the side of the government..."

Senate Majority Leader Bill Frist (R-TN): "Because Americans broadly are hungry for progress to be made [in Iraq], because what they usually hear and see day in, day out is negative in the sense that we see the sacrifices that are being paid by our men and women each and every day in communities all across America, the psychological impact of taking out the leader of it all is huge."

Sen. Joseph Biden (D-DE), senior Democrat on the Senate Foreign Relations Committee: "If we eliminated every single terrorist in Iraq, we still have a major, major military problem in Iraq. I hope this has a giant catalytic impact, but I fear it will be a momentary victory. And you'll be reporting a month from now a similar number of attacks and incidences of sectarian violence against one another and American troops."

Michael Berg, father of Nicholas Berg, a U.S. contractor believed to have been beheaded by Zarqawi: "I see more death coming out of al-Zarqawi's death."

Cyndi Armstrong, a spokeswoman for the family of Eugene Armstrong, a U.S. contractor whom Zarqawi is also believed to have beheaded: "An evil man is dead, and what more can you say?"

The reaction of Iraqis to the news of Zarqawi's death varied around the country Thursday. But the overall mood seemed to be guarded optimism for the most part.

In Baghdad, people on the street were buzzing with the news when they spoke with NPR.

Umm Ali, a 40-year-old woman who runs a clothing shop in the largely Shiite neighborhood of Karrada in central Baghdad, said, "Thank God. The effect is very good and all Iraqis are happy. His death makes all those who love Iraq happy." That feeling was echoed again and again along the busy shopping street that runs through the center of the area.

But there was also a sense of trepidation. Abdul Mejeed Al-Azawi, a 30-year-old father of four, warned, "There is more than one Zarqawi in the country." Al-Azawi is afraid that Zarqawi's followers and other groups might demonstrate their continued resolve by staging revenge attacks in the coming days.

That feeling was echoed by Mostafa Jawad Kareem, a 26-year-old man who works in a men's clothing store: "If Zarqawi is really dead, he will have a lot of supporters that will follow his steps."

And in the Shiite southern city of Basra, people with joyous faces celebrated by honking car horns and firing AK-47's in the air. There was also celebrating in the holy Shiite city of Najaf, though U.S. and Iraqi forces had spread out across the city to try to forestall any attacks. Najaf is among the places where bombings targeted civilians, most of which have been blamed on al-Qaida.