Accessibility links
Iraqi Reaction to Zarqawi's Death: A Guarded Hope Iraq's government has welcomed news of the death of Abu Musab al-Zarqawi, but it's possible no one will be more affected by Zarqawi's absence than Iraqis themselves. The U.S. military says the Jordanian-born al Qaida leader is responsible for killing thousands of civilians.

Iraq's government has welcomed news of the death of Abu Musab al-Zarqawi, but it's possible no one will be more affected by Zarqawi's absence than Iraqis themselves. The U.S. military says the Jordanian-born al Qaida leader is responsible for killing thousands of civilians.

As Iraq's central government finally comes together, some Iraqis say the news of Zarqawi's death shows them new hope. But the violence shows no sign of abating. In the 24 hours after Zarqawi's death, more than 40 people died in bombings in Baghdad alone. 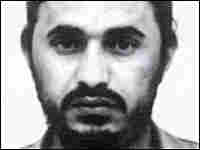 The leader of al-Qaida in Iraq, Zarqawi was No. 2 on America's most wanted list. He was killed Wednesday night during an air strike in Baqouba, northeast of Baghdad. Defense Dept. hide caption 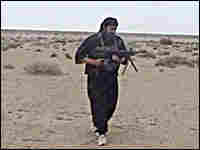 In early May, the Pentagon released video outtakes in which Zarqawi appeared unable to fire a machine gun properly. The video was discovered during U.S. military raids of purported al-Qaida safe houses southwest of Baghdad. Defense Dept. hide caption

Just how much of an impact Abu Musab al-Zarqawi's death will have on the ongoing insurgency in Iraq remains unclear. But everyone agrees that the insurgency is not going away.

President Bush, speaking in the Rose Garden this morning, said, "Zarqawi's death is a severe blow to al-Qaida. It is a significant victory in the global war on terror."

But the president quickly cautioned that there are tough days still ahead in Iraq. The sentiment was echoed by British Prime Minister Tony Blair.

"There will be fierce attempts," Blair said, "with the formation of the government, with the death of al-Zarqawi, to fight back."

The insurgency is not a single-headed beast, but rather a loose affiliation of many different groups that rarely act in a coordinated way.

Zarqawi was certainly seen as the leader of the foreign fighters in Iraq. The U.S. military says that al-Qaida in Iraq has been responsible for the vast majority of spectacular attacks on civilians in Iraq. That includes the bombing of a significant Shi'ite mosque in Samarra in February that set off the current round of sectarian violence that plagues the country.

The far larger insurgency, however, is not foreign, but is made up of Iraqis.

Sunni Arabs, some of whom were members of the former regime under Saddam Hussein, see their struggle as a resistance to a foreign occupation. That insurgency is much more fractured than al-Qaida, with no unifying leader.

There have been signs of tension between Iraqis and foreign fighters, with one viewing their cause as a nationalistic struggle, the other as a grand jihad against the West.

But Zarwqawi was certainly a charismatic leader and masterful propagandist, with frequent Web postings of his speeches and highly produced recruitment videos.

Retired Maj. General Robert Scales said Thursday that while the indigenous insurgency will continue for some time, it will be far less organized without Zarqawi.

"Once you get below Zarqawi's level, the degree of skill begins to fall off precipitously," Scales said.

A Coup for U.S. Intelligence

Even so, Scales cautioned that an insurgency is defined not just by the person at the top, but by an entire network.

And that, says Scales, is one of the most important aspects of Zarqawi's death. It's not just that he and some of his top lieutenants are dead; it's that somebody -- probably somebody close the insurgency -- told someone where Zarqawi was.

The intelligence that will be gathered from computers and files on the scene could give great insight into how al-Qaida, and perhaps the indigenous insurgency, are organized and run.

But the insurgency is not going away after Zarqawi's demise. Neither is the escalating death toll, which usually claims about 1,200 people a month in Baghdad alone. When asked about that figure Thursday, Prime Minister Blair said, "This isn't going to change with the death of al-Zarqawi. We should not have any illusions about this."

And an Internet statement from Zarqawi's group said, "The death of our leaders is life for us. It will only increase our persistence in continuing holy war so that the word of God will be supreme."