Accessibility links
What's In a Nickname? The Answer Is in the Cup The World Cup opens a window onto 32 countries, giving spectators a chance to compare styles of soccer. But it also gives less-serious soccer fans among us a chance to judge teams solely by their nicknames.

What's In a Nickname? The Answer Is in the Cup

What's In a Nickname? The Answer Is in the Cup 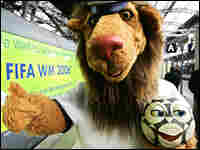 All aboard: Goleo, the mascot of World Cup 2006, poses in the main train station of Leipzig, in eastern Germany. He is holding "Pille," the soccer ball figure created solely to provide years of nightmares to small children. Jens Schlueter/AFP/Getty Images hide caption 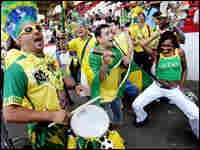 Brazilian soccer fans live by a code: Party. Win. Repeat as needed. That leaves them lots of time for coming up with new names for their players. Thomas Lohnes/AFP/Getty Images hide caption 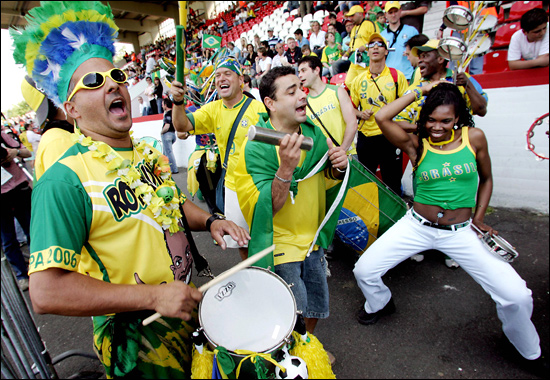 Brazilian soccer fans live by a code: Party. Win. Repeat as needed. That leaves them lots of time for coming up with new names for their players. 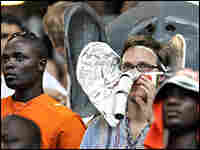 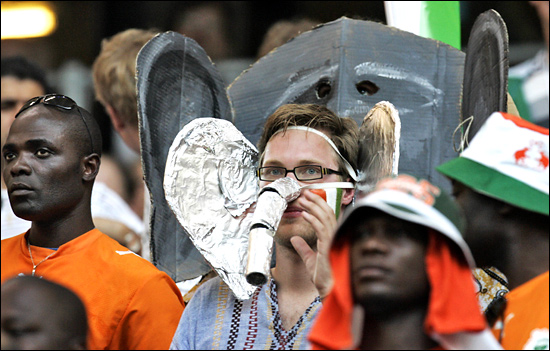 Go Elephants! A supporter of Ivory Coast sports his improvised elephant mask at his team's match with Argentina. 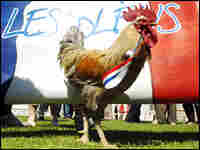 Coq Sportif: The 4-year-old rooster "P'Tit Claude" (Little Claude) stands before a French flag reading "All with the Blues." Claude earned the right to serve as the World Cup team's mascot by being elected "France's most beautiful rooster." Alain Jocard/AFP/Getty Images hide caption 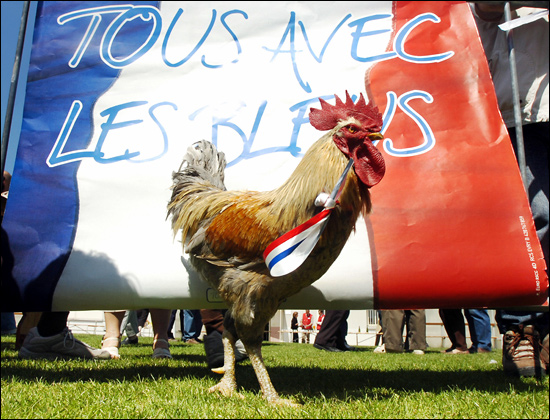 Coq Sportif: The 4-year-old rooster "P'Tit Claude" (Little Claude) stands before a French flag reading "All with the Blues." Claude earned the right to serve as the World Cup team's mascot by being elected "France's most beautiful rooster." 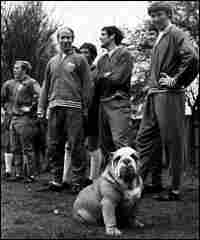 Members of England's 1970 World Cup team give a respectful distance to their mascot, Winston. The bulldog traveled with the team to Mexico. Douglas Miller/Keystone/Getty Images hide caption 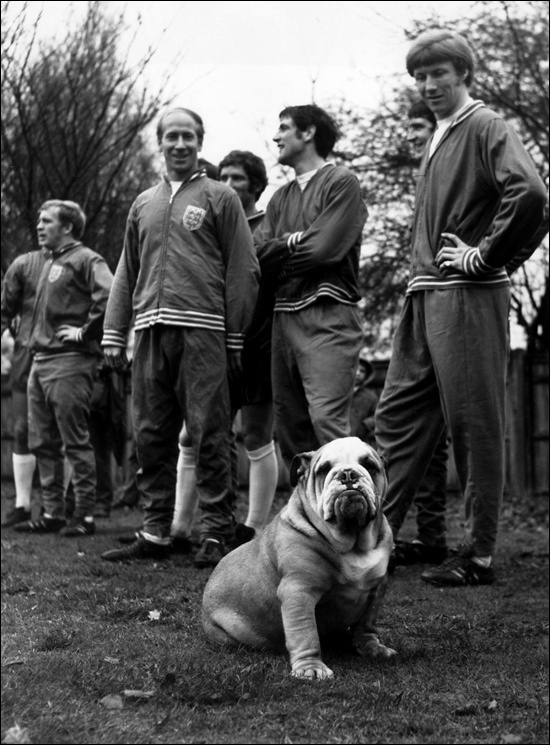 Members of England's 1970 World Cup team give a respectful distance to their mascot, Winston. The bulldog traveled with the team to Mexico.

The World Cup opens a window onto 32 countries, giving spectators a chance to compare styles of soccer. But it also brings gives some of the less-serious soccer fans among us a chance to judge teams solely by their nicknames.

Being a less-serious soccer fan myself, I offer a comprehensive, exhaustively researched review of the team names in the 2006 Cup, from Albicelestes (Argentina) to Zbirna (Ukraine). Or, more truthfully, a cheap attempt to entertain you between matches:

• Costa Rica -- The Ticos. The populist approach to naming your players after the generic name for citizens is apt for a country that lives la pura vida. The Ticos are probably just happy that with Trinidad and Tobago in the Cup, Costa Rica isn't the smallest country in the tournament.

• Ecuador -- The Tricolor. It seems unfair to make fun of a country's flag. But how much thought would it have taken to come up with a nickname that's more like, I don't know... a nickname?

• Germany -- Die Mannschaft. It means "the team." But reports suggest it's often wiser to chant simply "Germany!" or "Deutschland!" if one is cheering in a bar.

• Poland -- The White and Red. Very Old World, like their flag: two large bars. Sounds better in Polish: Bia¿o-czerwoni. Also called the Eagles by those who demand that nicknames involve animals.

• England -- Three Lions. Not very promising for an 11-man side. But it comes from their crest, which features three lions rampaging or something.

• Trinidad and Tobago -- The Soca Warriors. The savvy underdogs named themselves after a musical style, seemingly to put opponents at their ease.

• Paraguay -- The Guaranis. Sharing a name with what was once the largest Indian tribe in the Amazon region, the Guarani is also Paraguay's currency. So, these guys are money.

• Ivory Coast -- The Elephants. A wonderful image pops up of elephants playing soccer, like in some crazy U.S. beer commercial. But these guys are going to do it for real. Mitigating factor: The team's name is undermined by the country's name, which brings to mind extinction-level poaching.

• Netherlands -- Oranje. Yes, it means orange. Teams that embrace the color orange are usually a little crazy and unpredictable. And a bonus fact, anecdotally confirmed by my veterinarian pal: Orange cats are the friendliest of all the cat varieties.

• Serbia-Montenegro -- The Blues. There are a few too many "Blues" in the tournament. I think it reflects soccer's peaceful, uniting side. It's the color of the U.N., and the opposite of the self-important Red. If you're wondering, in Serbian the name's Plavi, which also means blonde, in terms of hair.

• Argentina -- The Albicelestes. Maybe the coolest of them all. Sounds good, and it's invested with a religious air that lets you know these guys are serious about it. I thought it meant "white celestial" but it's a poetic version of "white-blue," like their uniforms.

• Angola -- Palancas Negras. The Black Impalas. A sentimental favorite, because my uncle used to drive one. The actual animals are rare, so maybe embracing that will lead Angola to something rarer: the Round of 16.

• Iran -- Team Melli. An oddly evocative name for an oddly talented, passionate team. I was unable to confirm if they've ever played against the other Team Melli, the Wisconsin chocolate company's softball squad.

• Portugal -- Team of Shields. Chances are hampered by unavailability of longtime partner, Yarnell. If you wanted to know, in Portuguese, it's Selecção das Quinas. The shields refer to the national flag, which resembles a medieval crest.

• Mexico -- El Tri. It's short for Tricolores. It's not a Hispanicization of "the tree." Don't listen to those Stanford people.

• Ghana -- The Black Stars. A nice tie-in to Mos Def, whose CD Black Star is a favorite of mine. Who knew I had so much in common with Ghanaian soccer players?

• Italy -- The Azzurri. Not enough syllables. You expect more from the Italians. They'll have to win without my blessing.*

• Czech Republic -- The Locomotive. It's evocative of power, unity and direction. But the idea of a team making up a locomotive made more sense back in the old days, when a variety of wheels and rods propelled the machine together.

• The United States -- Some people say the Stars and Stripes. But evidently, there is no agreed-upon name. That's good, because it implies an uneven squad, full of egos and loose morals.

* For the completists out there, Azzurri is yet another instance of "the Blues."

• Australia -- The Socceroos. Nice try, but its goofiness serves to remind one that Australia has even less World Cup experience than Costa Rica. As you can often say of the Australians, at least they're having fun.

• Brazil -- Seleçao. It's stacked with slippery vowels, and it means "the selected," "the chosen" -- or merely "the team." But Brazil's team has nearly as many nicknames as its players do. Others: Canarinha (canary, as in yellow); Samba Boys; and Carioca (citizens of Rio). When you keep winning, fans need more things to yell.

• Croatia -- The Vatreni. It's mildly forbidding, as are many things Croatian, to my ears. But then it means something like "fire-boys." So, that could go either way.

• Japan -- The Boys in Blue. Is this a ruse? Are the Japanese the policemen of the World Cup? Or perhaps it's an attempt to distance themselves from their hosts -- and former Axis allies. The shorter name is just "the Blues," but that's just overused.

• France -- Les Bleus. In 1998, France broke the spell that confounds teams like the NBA's Utah Jazz: being unable to win big if named after a musical style. The curse also applies to teams named after bands, like the Philadelphia Eagles.

• South Korea -- The Asian Tigers. Well done, South Korea! It's tough and evocative. The team wears red and white instead of more "tigery" colors, but that can't be helped. And for backup, they go by the Taeguk Warriors.

• Switzerland -- Die Eidgenossen, or, "the Oath Comrades." From the country that provides security to the Pope, this could mean anything. One theory: the players are united by their love of profanity. One that has actual research behind it: recalls the origins of the Swiss nation in the 13th century. Perhaps due to uncertainty, most fans call the team simply, "Nati."

• Togo -- The Sparrow Hawks. This might be intimidating under some circumstances. Like, if you happen to be merely a plain old sparrow. In French, the name is Les Eperviers, which does little to inspire confidence.

• Saudi Arabia -- The Sons of the Desert. The Saudis keep it poetic. But they don't keep it simple: I've also seen their nickname listed as The Falcons (al-Sogour) and The Green ( al-Akhdar). Or, in high-exuberance mode, the Green Falcons.

• Spain -- La Furia. Somehow, it lacks. It represents anger, sure -- and feminine anger, like a woman scorned. Sometimes completed with Roja -- "the red wrath." Something I'd rather not contemplate.

• Tunisia -- The Carthage Eagles. A name full of history, certainly -- just ask Italy. But did they come up with it before the Maltese Falcon -- of (Sam) Spade or (Han) Solo's time? The answer could mean everything.

• Ukraine -- Zbirna. Proof that some teams don't give a damn if you know what their nickname is. As near as I can tell, Zbirna means "Total." Its connotations are open-ended, but the word has a monolithic quality that commands respect. As long as nobody thinks about the cereal.