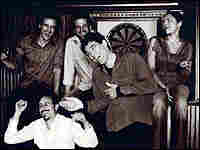 'No Place To Fall'

Featuring five accomplished New York City musicians (most notably Norah Jones on piano and vocals), The Little Willies' members bonded through their shared love of classic country and Americana — particularly the music of Hank Williams Sr. and Willie Nelson, from whom the band derives its name. Low-key and relaxed, the band's take on classic American music is intimate and engaging.

Beginning with a one-off gig at New York City's Living Room in 2003, the collaboration quickly snowballed into appearances there whenever the band members had time in between their other projects. The appearances eventually inspired The Little Willies to release a self-titled CD in March 2006.

Composed of nine covers and four originals, the album finds Jones sharing the spotlight with singer and guitarist Richard Julian on tracks like "I'll Never Get Out of This World Alive," first made famous by Hank Williams. The originals maintain the tone and spirit of the covers, especially on the humorous "Lou Reed."