Accessibility links
Movie Clip Stirs Debate over Black Relationships A clip from the upcoming film Diary of a Tired Black Man is stirring debate in the African-American community about interracial dating and whether some black women are "too angry" to be datable. 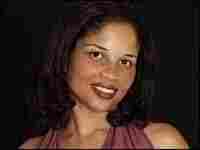 LaDawn Black is a Baltimore-based author and radio host. Her show deals with relationships between black men and women. Rodney Choice/ hide caption 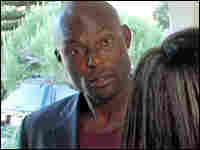 Note: This movie clip contains adult themes. It has been edited for graphic language. 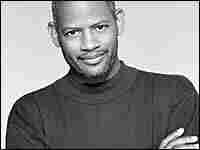 A clip from the upcoming film Diary of a Tired Black Man is generating a great deal of buzz in the African-American community. The scene features a man arriving at the house of his former spouse with a new partner: a white woman.

The clip has been e-mailed around the country and featured on blogs and on nationally syndicated, black-oriented radio shows. It has sparked a heated debate over the many issues it raises, from interracial dating to whether many black women are simply "too angry" to be datable.

The Points the Film Clip Makes

Why Black Men and Women Fail to Connect

The clip is just three-and-a-half minutes long. But it's still enough to leave many viewers waving their hands in the air -- either in agreement or frustration.

The Woman Who Inspired the Film

Positive Response to the Scene from Women

His Advice for Tired Black Men

His Advice for Angry Black Women

The clip begins with an attractive black woman sitting with three friends, watching her ex-husband pull into her driveway with a white woman at his side. The women castigate the ex-husband, James, as a "weak punk" who has chosen to date outside the race rather than handle what they call a strong black woman. James blames the women for their inability to find, much less keep, a decent black man at their side -- because of their penchant for drama.

First-time filmmaker Tim Alexander, who enjoys being provocative, says there's a disease out there that he calls the "angry black woman syndrome." He says it must be identified, diagnosed and treated.

Alexander believes African-American women who grew up in fatherless homes, hearing their aunts and grandmothers saying black men are no good -- and hearing that opinion reinforced in the media -- are now angry adult women.

"They grow up, deal with the wrong men, finally meet the right guy and don't know how to turn it off," Alexander says. "They are so used to fighting; it's the only way they know to have a relationship. So when a man is a good man, they think he's a punk."

Alexander's movie scene revives a sometimes rancorous debate that has been going on in the African-American community for decades: Why can't black men and women deal with each other in a positive way? And what does that mean for the future of the black family?

It is a burning question for many, including the callers that flooded the phone lines during Alexander's recent appearances on nationally syndicated black radio shows. When Alexander appeared on Rev. Al Sharpton's show, Keeping It Real, one female caller argued that black women's anger "generally starts from the man." A male caller countered: "When we come home, we don't need that loud-mouthed, self-sufficient, independent macho woman disagreeing with everything we say. We need kind women."

African-Americans have been bombarded in recent months with negative messages about the outlook for black couples. The Washington Post fronted a weekend "Outlook" section with the headline "Marriage Is for White People," and there are many books with titles such as Black and Single. The Joint Center for Political and Economic Studies in Washington says the percentage of black women who've never married has more than doubled between 1950 and 2004.

"If you internalize that, you will enter a relationship where you are doing everything or putting up with anything just to have someone," says LaDawn Black, a Baltimore-based author and radio host. Her show deals with relationships between black men and women. She says things aren't as bad out there as one might think.

"Don't believe it," Black says, "because if you look around, you have friends having successful relationships."

UCLA professor and sex therapist Gail Wyatt agrees. She says African-American men and women have to stop allowing outdated concepts -– and media-driven angst -– to divide them.

"Our strength is in our ability to stand together," Wyatt says. "I don't care if a black man marries a black woman or not. I care if we support each other and don't buy into myths that make us look like and live like stereotypes."

There's no quick fix for the issues between African-American men and women, Wyatt says, but she believes they can be solved. Filmmaker Tim Alexander says he hopes his movie sparks a discussion that can bring some change and healing to the black community.