Accessibility links
Wave of the Future: Magnetic Fingers What is it like to feel electromagnetic energy? Host Debbie Elliott talks with journalist Quinn Norton who has written an article in Wired News about a procedure that involves implanting a magnet in a person's fingertips.

What is it like to feel electromagnetic energy? Host Debbie Elliott talks with journalist Quinn Norton who has written an article in Wired News about a procedure that involves implanting a magnet in a person's fingertips. 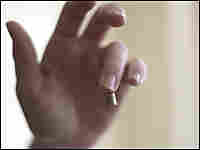 Quinn Norton holds up her finger with the magnet implant. The implant is allowing her to pick up another magnet, seen dangling from the end of her finger. Arjun Prasad hide caption 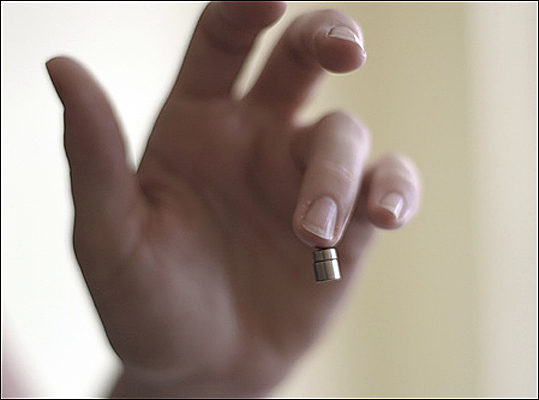 Quinn Norton holds up her finger with the magnet implant. The implant is allowing her to pick up another magnet, seen dangling from the end of her finger.

Scientists aren't the only ones who are tinkering with the sense of touch. Some lay people have found a way to get their fingers to sense electromagnetic waves. They do it by putting magnets under the skin of their fingertips. Freelance journalist Quinn Norton has written about the procedure for Wired News and joins us. Hello there.

ELLIOTT: So why would people want or need to sense an electromagnetic field?

Ms. NORTON: Well, I think - I think it's just a matter of extending their perceptual range. The need is probably pretty small right now, but the desire is just to experience the world on another level.

ELLIOTT: So I understand you actually tried this out?

Ms. NORTON: Yes. I went to Arizona and the body modification artist that had been doing this, they're not medical practitioners so they don't have access to anesthetics. So they soaked my finger in ice to reduce the pain.

ELLIOTT: And when we're talking about body modification, what, piercings, tattoos, those kinds of things?

ELLIOTT: Okay. So you go to these people and you say put a magnet in my finger.

ELLIOTT: What did it do for you once you had this magnet in your fingertip?

Ms. NORTON: Well, it was pretty exciting at first. I could pick out live cords.

ELLIOTT: Like the lamp cord? So you're sitting in your living room and the lamp is on and your finger kind of vibrates?

Ms. NORTON: I have to touch it pretty much. If I - if I pick up a cord or I ran my hand over my laptop, certain parts of it would just make my finger tingle. I would find phone cords that I had no idea were on the side of houses. That's one of the ones that like consistently startled me. Is I'd reach over towards something and I'd have this very sudden tingling in my finger from a live phone cord. Phone cords aren't particularly high voltage but they're also not very shielded. So I could really feel them.

ELLIOTT: Having this small magnetic implanted in your finger sounds like it was sort of just a cool thing for you. I'm wondering though what - what are the technological possibilities of this procedure?

Ms. NORTON: I do have one small anecdote that was somewhat practical. I was brought to a demo lab by a Fortune 500 company and they were demonstrating a technology that they wanted to pass over regular phone lines. And they did the whole demo. It was pretty impressive, but as it turned out I reached down and held the phone lines that they were - that they were using to demo, and they were passing far more current through them than you actually can in a regular setup with phone lines. So I was there in the middle of a group of press and I didn't really have a good way of communicating to the other people around me why I would know that this demo probably wasn't very realistic.

ELLIOTT: Do you think it would ever be used, say, to help someone like an electrician do their job better?

Ms. NORTON: I think it's got a long way to go before it can really be considered for that. And the people that are doing it are doing it on a much more experimental and artistic basis.

ELLIOTT: So I get the sense that this is not something that you would recommend to friends and family.

Ms. NORTON: No. No. It isn't there and it isn't safe. There's a lot of things that need to be worked out about this but it raises a lot of interesting questions about how we can extend ourselves.

ELLIOTT: Freelance journalist Quinn Norton, who has a magnet in her finger. Thank you for talking to us.

Scientists Grasp for Sense of the Human Touch June 11, 2006