Accessibility links
Human Existence Is in Peril As a young prosecutor at the Nuremberg trials, Whitney R. Harris saw the worst of "man's inhumanity to man." Now in his 90s, Harris believes we honor God by giving respect, mercy and peace to one other.

Listen
Human Existence Is in Peril 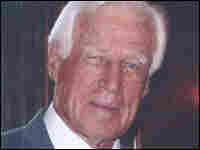 I believe that to comprehend our vast universe, with its millions of fiery stars and frightening dark holes, we must answer the basic question, Who created the universe?

We know that Earth, which was spun off from the sun, is a planet with a beginning. Moreover, we know that Earth, once a fiery ball, has cooled and gained life upon its surface with static, non-thinking plants and mobile, thinking animals. We do not know where the first manifestation of that life -- the tiniest amoeba -- came from. To ignite the spark of life required the hand of God.

Until this time, at least, man has evolved far beyond any other animals on Earth in comprehension and intelligence. The carnivores exceed mans strength on land; the amphibians surpass his power at sea. But man has the gift of reason, which enables him to dominate life on earth -- and the chance to survive as long as the solar system remains hospitable to him. That chance, alas, is not eternal.

And, thus, I believe human life is finite.

Within these limits of survivability man holds his destiny in his own hands. He has yet to prove his worthiness. In the last century he destroyed more of his own kind in war and in merciless murder than at any other time in history. He has the capability of obliterating himself and all other life upon this planet. And he seems unable to appreciate the consequences of that power. The life that God gave to him may be by him destroyed.

And so, I believe human existence is in peril.

The challenge to humanity is to establish and maintain the foundations of peace and justice upon the Earth for the centuries to come. We must learn to end war and protect life, to seek justice and find mercy, to help others and embrace compassion. Each person must respect every other person and honor the God who made this incredible mystery of human life a reality.

I believe the time of man on planet Earth will then be justified.

I believe there is God,

I believe God is merciful and just,

But if man desires to destroy himself

I believe God will not save him.