Accessibility links
Latinos Rattled by Ohio Sheriff's Mission Local authorities across the country complain that they bear the financial burden of illegal immigration, yet they lack the power to enforce immigration law. In Butler County, Ohio, Sheriff Richard Jones is on a mission to tackle the problem. And that's rattling the local Hispanic population. 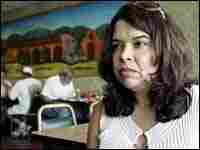 Lourdes de Leon, owner of the Taqueria Mercado, a Butler County restaurant, says the sheriff's crackdown on illegal immigrants has many in the local Hispanic community frightened of the police. /Tom Dodge/Columbus Dispatch hide caption 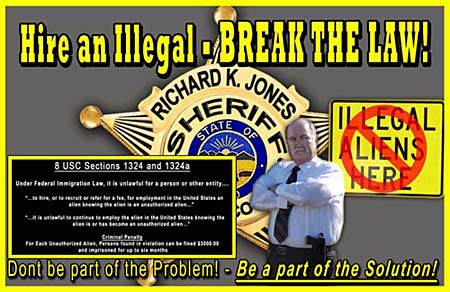 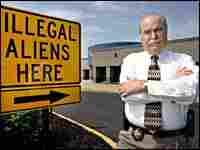 Frustrated by what he sees as federal inaction, Butler County Sheriff Richard Jones has launched a local campaign against illegal immigration in his swath of southern Ohio. A sign he erected outside the county jail shows his resolve. /Tom Dodge/Columbus Dispatch hide caption

Local authorities across the country complain that they bear the financial burden of illegal immigration, yet they lack the power to enforce immigration law. In Butler County, Ohio, Sheriff Richard Jones is on a mission to tackle the problem. And he's frightening the local Hispanic population.

Jones' hero is John Wayne; a near life-sized poster of the actor hangs next to his desk. With a similar swagger, Jones is on a mission to prod, cajole, even shame federal officials into action. In the parking area outside the county jail, two new signs proclaim "Illegal Aliens Here," with an arrow pointing inside.

"It's a big, bright yellow sign, and it's to let people know in our community that there are illegals here, and it is a problem, and we want some help," Jones says.

Jones says it costs his county thousands of dollars a month to jail lawbreakers who also happen to be illegal immigrants. He has billed the federal government for the incarceration costs -- $150,000 since last October -- though he doesn't expect to see any reimbursement checks.

More recently, the sheriff began targeting businesses. On six billboards across the county, Jones has plastered his own image, arms crossed over chest, reminding employers that it's illegal to hire undocumented workers. He says the signs are generating tips from the public. On his blog, Jones warns companies, "You know who you are, and we're coming."

"If you engage in an underground economy and you think that we don't know about it, we'll be visiting you," Jones says.

Jones won't reveal which businesses he's visited; a spokesman says they're considered "uncharged suspects." But in fact, Jones couldn't charge the companies if he wanted to -- at least not with hiring illegal workers. That's a federal responsibility. Critics say the sheriff is overstepping his bounds, just as they say he did a few weeks ago, when his officers detained 18 Hispanic workers at a construction site.

"If you're going to hold anybody, you've got to have the charges," says Greg Palmore with the regional office of Immigration and Customs Enforcement, or ICE.

He says Jones picked up the workers after someone reported a disturbance at the worksite. But exactly what happened was sketchy, and Jones had no actual charges to hold them on. He called ICE, but the agency declined to come for the men. For Jones, it was one more frustrating example of federal failure. For Palmore, the agency's course of action was clear.

"If two simultaneous calls came in -- one that was national security, and the other being an undocumented immigrant that poses no significant public safety threat -- you can surmise exactly where we'll put our resources," Palmore says.

It might seem as if Jones' campaign against illegal immigration isn't having much impact -- that is, until you head across town to an area locals call Little Mexico. Residents say the area has been revitalized by immigrants from Mexico, but as I visit, the streets are mostly empty, and in a 20-minute period, four police cars go by.

"I've heard about what is happening with the new laws and, honestly, I'm scared because we don't have our papers," says Alejandra, a Hispanic woman pushing her toddler son down the street in a stroller.

She has just come from collecting clothes at a church and looks as if she can't get home fast enough. As she speaks, her eyes dart all around. Alejandra says she tries to stay off the streets as much as possible these days. Her husband has a job in a factory, but they're so worried that they, too, might be arrested by the sheriff that they just might give up on life in the United States.

"In two, three months, we might go back to Mexico and not come back again," Alejandra says. "I even have a brother-in-law, his company has told him he has one more month and then there will be no more work for him. So we're going to have to go."

A Community in Hiding

The police cars that cruise by Little Mexico aren't from Sheriff Jones' office but from the city of Hamilton, whose police force is trying to improve relations with the Hispanic community. But that effort seems undermined by Jones' campaign against illegal immigrants.

Lourdes de Leon, co-owner of Taqueria Mercado, says friendly police officers used to be regulars at her Mexican restaurant, in part to make the community more comfortable with them. But she recently asked them to stop coming. Their presence was scaring customers away.

Today, if a crime happened, de Leon is sure most Hispanics would be too scared to call the police. Even without officers around, she points to plenty of empty tables. Over the past month or so, business is down by more than one-third, she says.

De Leon is a U.S. citizen, but she understands her customers' fears.

"Me myself, you know, I'm afraid," de Leon says. She worries the sheriff might target her business "even if I'm doing nothing wrong."