Accessibility links
Battle Across Media: 'Iron Artist' In New York's "Iron Artist" competition, artists create art and curate an exhibit in record time. Inspired by the original Japanese cooking show Iron Chef, the competition consists of two duels, each 45 minutes, in which opponents create artwork in response to a theme revealed to them on the spot. Running commentary is provided by a panel of judges, roving commentators, and prominent New York art critics.

In New York's "Iron Artist" competition, artists create art and curate an exhibit in record time. Inspired by the original Japanese cooking show Iron Chef, the competition consists of two duels, each 45 minutes, in which opponents create artwork in response to a theme revealed to them on the spot. Running commentary is provided by a panel of judges, roving commentators, and prominent New York art critics. 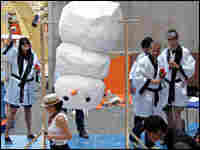 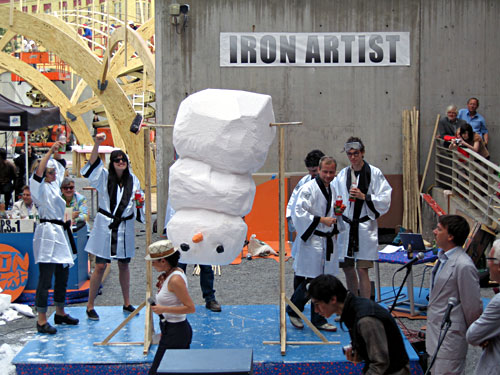 Americans love competition, whether it's singing on American Idol or cooking on Iron Chef. It seems like any discipline can be made more exciting with winners and losers. And that got an art museum in New York City thinking. How about pitting the stars of the contemporary art world against each other in a fight to the aesthetic death.

The courtyard of the contemporary art museum P.S. 1 is set up as an amphitheater. Two stages, two giant blocks of Styrofoam, tables filled with power tools and a thousand spectators. Sculptor Jude Tallichet is already taunting her opponent.

Ms. JUDE TALLICHET (Sculptor, Competitor in Iron Artist): Yeah. He's really nervous. He's monopolizing all the really good power tools. But we can do it by hand and we will put on a better show putting our stuff together with hand tools than he will with his fancy nail gun.

SMITH: On the other stage, German sculptor Olav Westphalen seems unfamiliar with this whole American custom of trash talking.

Mr. OLAV WESTPHALEN (Sculptor, Competitor in Iron Artist): No, we're just here to make a good sculpture. And, you know, I'll let her win if she needs to.

SMITH: Yeah, right. Everyone knows the art world is cutthroat. So perhaps it makes sense to drag all that drama out into the open. Matt Freedman, the MC of the event, came up with the idea of compressing all the competition, judgment and showmanship of making art into 45 minutes.

Mr. MATT FREEDMAN (MC, Iron Artist Competition): In a sense, they have to imagine the piece, they have to build the piece. And even as they're building the piece, it's immediately commented on, judged and then displayed. And we're going to create a catalog at the same time.

SMITH: Both artists enter the arena with their posses. Jude Tallichet is surrounded by art students dressed as black-clad ninjas. Olav Westphalen and his team wear the silk robes favored by boxers. Like the television show Iron Chef, the two artists are given the basic ingredients and the theme.

Tallichet moves out in front early, as it becomes clear that she's carving the foam into a series of planets suspended on sticks, as her ninjas dance in a circle.

Ms. TALLICHET: Well I think if you're an artist, you can't be afraid to make a fool of yourself.

SMITH: On the other stage, Olav Westphalen's sculpture is more mysterious. It looks like a series of blobs until minutes from the end when he puts on the carrot nose and hangs it upside down. It's an inverted snowman now blowing in the breeze.

Mr. FREEDMAN: The winner is Olav.

SMITH: As the spectators spring to their feet, they have to dust off little bits of foam from their hair and clothing. Betty Winn(ph) had a front-row seat.

Ms. BETTY WINN (Audience member): Styrofoam's really toxic for you. I'm a little concerned. I was breathing it the whole time while he was carving it.

SMITH: But Winn says it was worth it.

Ms. WINN: I thought it was great to watch the two different processes. From one person who is from more of a European sort of background. To see him not speaking during the process at all and then come up with something truly amazing and conceptual. And then on the other hand watch someone else who was really nurturing and creative and more spastic and performative(ph). But in the end I think that the sculpture said it for everyone.

SMITH: But wait a minute, how exactly was an upside down snowman representative of love and its discontents? Westphalen admits that he's working on a whole series of snowmen for a show.

Mr. WESTPHALEN: We figured it's close enough. So we turned him around to make him unhappy. As in tortured or in pain or in bad S-and-M set-up or something.

SMITH: A little bluff, a little attitude, a little self-promotion? Sounds just like an Iron artist.