Accessibility links
Father's Day: Think Outside the Tie Box Breakfast in bed isn't just for moms anymore. Forget about the tie this Father's Day. Betsy Block shares a recipe that even the little ones can whip up for a tasty, simple morning meal for Dad. 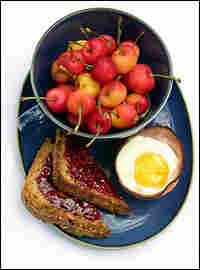 Surprise Dad with breakfast in bed this Father's Day. Recipe for ham and egg cups below. Andrew Pockrose hide caption

Quick: I say Father's Day gift, you say what? Chocolates in the shape of golf balls. Barbecue tongs. A tie.

Over three generations of Father's Days, I've given all of the above. But what I've never given is breakfast in bed. Neither have most of my friends. Why?

"Breakfast in bed is a mom thing," says my husband. "Do dads even eat breakfast?" he asks. My 10-year-old son also has opinions. "Dads get up about a half-hour earlier than moms," he chimes in, "so it would be hard to surprise them."

Even though that's how things go in our house, it's time to make my husband breakfast in bed, whether or not he wants it. Cooking gives the kids so much satisfaction, and Father's Day really is all about them.

There is, however, one small problem. While I love to cook, and I love my kids, I don't always love cooking with my kids. So the trick is to find a recipe that's delicious, yet also simple enough that it won't result in a pre-dawn, all-family fight. It would be wrong to wake Dad up on Father's Day with a lot of yelling.

As I mulled it over, I realized I knew just what to do. A few years ago, the cover of Gourmet magazine featured perfect-looking eggs, sunny and bright, perched in beautiful cups made of ham. The recipe was pretty straightforward, but once we got our hands on it and really dumbed it down, it was absurdly easy. My kids and I can fairly claim we're able to cook an amazing breakfast that looks like the cover of Gourmet.

True, it doesn't look exactly the same. And the recipe's quite different. Gourmet, actually, wouldn't recognize it. But it looks good enough, and it tastes great. You just have to maintain realistically low standards.

Our revamped recipe will put off some people, either because they want a dish that looks perfect or because they don't do much cooking. That's why I decided to put this recipe to the ultimate test: I asked my friend Ruth to make it.

Ruth is a genius in many ways, but she's no Julia Child. She is, however, a good friend, and gamely agreed although even buying ham raised difficult questions for her. What kind of ham? How thick should it be?

I advised her to get it thin enough to drape but not so thin that it tears. Ruth bought a half-pound of ham that had been cut into only four slices -- a bit too thick to work with easily.

She rallied, however. She even thought of having her kids crack the eggs into a measuring cup before putting them in the ham cups to ensure a shell-free breakfast. Once the eggs were cooked, her family of five sat down to eat together and had a great time. She forgot about the "in bed" part, but it was just a dry run.

Her husband, a loving father who might be getting just the tiniest bit tired of hand-painted mugs after a decade of Father's Days, loved his breakfast. It might be enough to keep him in bed Sunday morning. 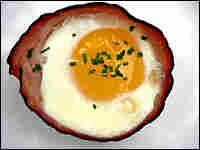 Ham and egg cups are simple yet elegant -- just like the cover of Gourmet magazine. Andrew Pockrose hide caption

Inspired by a photo of ham and egg cups on the cover of Gourmet, we invented our own recipe. It's easy, elegant and good.

1 tablespoon of shredded cheese, any kind

Cut-up herbs to taste (I usually use chives. As for salt, the cheese and ham make it salty enough for our taste, and if the dad in your life likes pepper, go for it.)

Drape the ham into a nonstick muffin cup, covering the bottom and sides.

If you're looking for a picture-perfect ham and egg cup, keep in mind that draping the ham just right can be a challenge. Cutting off the bottom third (width-wise) makes it easier to shape a circular top; otherwise, you can try to fold the ham in at intervals to make it look more like a flower (as seen on the cover of Gourmet). Frankly, I've never been able to achieve this look. Don't worry if the ham isn't perfectly hole-free and some of the egg leaks through; that's why the muffin tins are nonstick. The ham cups will still look good and taste great.

Once you're satisfied with the shape of the cups, place the grated cheese in the bottom, then crack the egg on top. (If you have young kids working with you and want to ensure a shell-free breakfast, take Ruth's lead and crack the eggs into a separate container first.)

Bake at 350 for about 15 minutes. The yellow will still be a little runny and the ham will be crispy on the edges.

Let them cool a bit before trying to remove them; run a dull knife around the outside edge as needed.

Transfer to a plate with toast and fruit, place the plate on a tray with coffee and the paper, and promptly deliver to a deserving dad.