Accessibility links
Iraqis Move to Bolster Baghdad Security The new government in Iraq puts tens of thousands of members of the security forces on the streets in a bid to restore security outside Baghdad's fortified Green Zone. The move follows President Bush's surprise visit Tuesday.

The new government in Iraq puts tens of thousands of members of the security forces on the streets in a bid to restore security outside Baghdad's fortified Green Zone. The move follows President Bush's surprise visit Tuesday. 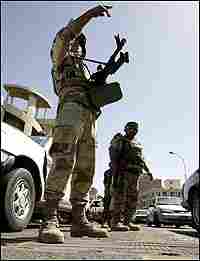 Baghdad woke up to the first day of the new prime minister's ambitious plan to retake his capital. About 70,000 Iraqi soldiers and police have set up checkpoints throughout the city this morning. They will also conduct raids on neighborhoods suspecting of harboring insurgents.

NPR's Jamie Tarabay is in Baghdad and joins us now to talk about the crackdown. Jamie, have you been able to get out today and see what this operation looks like?

Well, we went for a bit of a drive around this morning just to get a sense of how it's playing out in the streets. Unfortunately, we ran into a lot of traffic and we were stuck at one point for about a half an hour. What was most disturbing about that situation was that Iraqi army and police had blocked off one of the main streets of the capital because there was a suspicious car parked out the front of the kebab shop. But instead of dispersing everyone and clearing the area, they blocked all the passages.

So if the car was, in fact, rigged to explode, it would have killed dozens of people. It wasn't a particularly good demonstration of police work. As it is, a car bomb blew up in eastern Baghdad this morning and killed two civilians and about 10 others were wounded. And they were clashes in the neighborhood of Adameia(ph), which is mainly Sunni.

We've been told that a lot of the residents who live in these neighborhoods that were going to be targeted today, hid a lot of their weapons when they found out. And so, you know, a lot of them are particularly distrustful of the police, which they see as Shiite dominated. And we understand that at least in Adameia, gunmen have blocked off roads and were telling civilians to get out of the area.

WERTHEIMER: So how long is this security crackdown supposed to last?

TARABAY: Well, Prime Minister Nouri al-Maliki has said that the operation will take as long as it has to, to restore security to the capital.

WERTHEIMER: President Bush, made a surprise visit to Baghdad yesterday, to try to bolster the new government. Presumably, his visit makes it even more important, for him and for Prime Minister Nouri al-Maliki, that this security operation succeed.

TARABAY: Absolutely. It's crucial for Maliki's own political survival, that this operation comes off, since he's been the one who's been touting this plan as his solution to the lawlessness that's on the streets of the capital. I mean, ever since he was appointed prime minister, he's made security his biggest priority. He's been selling it as this really well-thought out and well-planned operation, not just a knee-jerk reaction to events.

So it's going to be a very clear indication of how effective a prime minister he'll be and, frankly, whether his government will be able to last. He knows the Iraqi people are desperate for security. There's so much random violence that happens here everyday. People are kidnapped. You know, bodies are dumped along highways. And they're tired and they're desperate, and hopes are high because he's promised that this will work.

And for President Bush, the ability for Iraqi security forces to stand up and do the job, will ease the burden on U.S. and coalition forces and allow them to gradually pull out of Iraq, as well.

WERTHEIMER: Jamie, there was a similar crackdown, which was called Operation Lightning, in May of 2005, which was not very successful. The violence continued.

TARABAY: There was a special focus, at that time, on Sunni areas like Adameia, which created a lot of resentment within the Sunni community, and also from Sunni politicians, who, at the time, were still reluctant to join the political process. Everyone's been saying that for the security situation to stabilize, the Sunnis need to be involved. So Prime Minister Maliki needs to tread very carefully here, and show that he really is about uniting all the Iraqis.

WERTHEIMER: Thanks very much. NPR's Jamie Tarabay in Baghdad.