Accessibility links
Artifacts from Ground Zero Await Memorial Site The budget of a proposed World Trade Center memorial has surged to almost $1 billion. Beth Fertig of member station WNYC visits an aircraft hangar at John F. Kennedy Airport in New York City where wreckage and artifacts from the fallen Twin Towers are being housed until the memorial plans are finalized.

The budget of a proposed World Trade Center memorial has surged to almost $1 billion. Beth Fertig of member station WNYC visits an aircraft hangar at John F. Kennedy Airport in New York City where wreckage and artifacts from the fallen Twin Towers are being housed until the memorial plans are finalized. 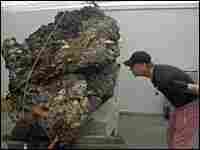 Preservationist Peter Gatt with the "compression" -- a section of metal where four whole stories of one of the Twin Towers compressed into a block just four feet high. Beth Fertig hide caption 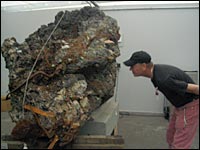 Preservationist Peter Gatt with the "compression" -- a section of metal where four whole stories of one of the Twin Towers compressed into a block just four feet high.

This is DAY TO DAY. I'm Madeleine Brand. In New York, the cost to build the World Trade Center memorial is huge, almost a billion dollars. The state and the city want to cut that amount in half. Recommendations to do that, are due tomorrow. The memorial is supposed to include a museum with wreckage from the Twin Towers. Meanwhile, the artifacts are being preserved until they can be shown to the public. Beth Fertig of member station WNYC got a look and she has this report.

The Trade Center wreckage is being housed in hangar 17 at John F. Kennedy Airport. The gray concrete floors stand in stark relief against the dark red beams and columns that are 30 to 50 feet long, lying down, covered in plastic.

Mr. CHARLES GARGANO (Vice Chairman, Port Authority of New York and New Jersey): You are looking at some of the largest steel columns and beams that you will ever see in any building around the world.

Ms. FERTIG: Charles Gargano is vice chairman of the Port Authority of New York and New Jersey, which owns both the airplane hangar and the Trade Center site. Pieces of steel that once formed towers 110 stories tall were melted by fire and crushed by millions of tons of debris. Their shiny facades are gone and they lie naked, showing their original red color, bent like spoons and molded into strange shapes.

One of the oddest shapes is called the compression. It's housed in a locked room and it looks like a meteorite. It comes from one of the towers, but nobody knows which. Gargano says it's actually four stories that have been crushed into an object four feet high.

Mr. GATT: Millions of tons of weight came down, and that is made up of a composition of different materials: steel, concrete, and other materials. And you can see how that was compressed.

Ms. FERTIG: Amazingly, it's possible to make out individual objects. There are bathroom tiles, a pipe, and blackened pieces of paper carbonized by the heat. It smells like charcoal. Peter Gatt, who's one of the preservationists here, points to the spine of what looks like a corporate report.

Mr. PETER GATT (Preservationist): You can find a (Unintelligible) inside. You can read letters from these little papers. For some reason, it's still here.

Ms. FERTIG: Gatt has been watching for any signs of deterioration. Cracks emerged over a year ago and they're now marked with tiny green pins to monitor the slightest change. The humidity and temperature in this room are tightly controlled. Preservationists have taken similar steps for other important pieces.

One is a 35-foot-long column. It's lying on its side like a relic from some other civilization, covered with messages from the recovery workers at the World Trade Center site. Amory Houghton, who manages the preservation project, shows where Port Authority police painted the number 37 in blue, representing the number of officers who died on 9/11.

Mr. AMORY HOUGHTON (Manager, World Trade Center Preservation project): They covered it with about five coats of paint, and then they put, you know, and then they stenciled the 37 on it. So, as you can see, this paint was literally flaking off.

Ms. FERTIG: Gatt and his crew spent six months restoring this column. They mounted some paint chips with magnets and injected others with a solution to prevent more chipping.

Mr. GATT: We saved the rust that fell off of the column, we saved it. we made it a little bit stronger, (unintelligible) the right spots for it, put that back, and restored the whole image.

Ms. FERTIG: The column now looks exactly the way it did when it was removed from the World Trade Center site in a 2002 ceremony marking the end of the cleanup. Photos, prayer cards, and messages from the ironworkers have been lovingly restored. Houghton reads a few of them.

Mr. HOUGHTON: Jimmy, from Local 14. Tattoo, from the Electrical Union.

Ms. FERTIG: But the preservationists aren't able to control everything in their quests to keep the artifacts the way they were after the 2001 attacks. Everyone here is battling with nature.

Mr. HOUGHTON: They're the bane of our existence.

Ms. FERTIG: Because it's a huge airplane hangar, birds are a constant presence. Little white droppings are visible on sections of steel in the open areas. Gatt has figured out a way to remove it, and the Port Authority is building a net to keep the avian visitors out, while also repairing the roof.

The work is deeply meaningful for everyone involved in this project. Gatt is a Hungarian immigrant who's lived in New York for the past 20 years, working in art preservation. He's come to love these pieces of steel.

Mr. GATT: For me, how I see that, every piece is coming to be a sculpture for me.

Ms. FERTIG: Gatt says that appreciation keeps him going as he works to save the columns and beams for future generations. There's also a personal investment, says Amory Houghton of the Port Authority.

Ms. FERTIG: An obligation the agency intends to fulfill regardless of where the memorial and museum are finally housed. For NPR News, I'm Beth Fertig in New York.

BRAND: There's more coming up on DAY TO DAY from NPR News.