Accessibility links
Study: Emergency Rooms at 'Breaking Point' The nation's emergency rooms are crowded and overwhelmed. A major investigation says hospital ERs, which can barely handle daily 911 calls, are far from ready to handle the mass casualties that a flu epidemic or terrorist strike might bring. 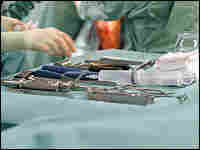 About once every minute, an ambulance carrying a sick patient is turned away from a full emergency room and sent to another one farther away, according to a report from the Institute of Medicine. IStockPhoto hide caption

The Institute of Medicine released three reports Wednesday on emergency medical care in the United States. The reports describe a system working far past capacity and plagued by long waits and serious crowding.

Dr. Patrick O'Neal in Atlanta knows the problems firsthand. He is medical director of Georgia's Emergency Medical Services office. Several years ago, he was in an ambulance carrying a child who had lost consciousness after a bad fall. O'Neal was anxious. A bleed within the brain would require immediate treatment, but he couldn't get into the nearby emergency room.

"The first hospital -- which was the closest -- we radioed and indicated what we had," O'Neal recalls. "We were told that they were on diversion because they did not have a neurosurgeon available."

Specialists have begun avoiding emergency-room duty because many uninsured patients can't pay, and because of the cost of malpractice insurance.

"We radioed the next-closest available facility and we were told that they had no spaces left in the emergency department where they could even evaluate patients," O'Neal says.

The third hospital was a 45-minute drive away. After a tense ride, the exam there showed no bleeding within the skull.

"We were lucky," O'Neal says. "But you're not always lucky."

At a press conference today, one of the reports' authors, trauma surgeon Brent Eastman, said that type of incident can happen to any patient.

"Because of long waits and crowded EDs, the ambulance may get there and not be able to offload and you," Eastman says. "You will be diverted."

An incident such as this occurs once every minute, every hour, every day in the United Sates, Eastman says.

If a patient isn't diverted somewhere else, crowding can lead to waits of as long as two days.

The emergency medical services or EMS transport system itself has problems. Shirley Gamble of the United Way of Austin, Texas, says people are misinformed if they think things will go smoothly once they call an ambulance.

"Most of us think about TV shows and imagine EMS coming in, immediately saving your life and getting you to the hospital without any barriers to success," Gamble says. "That's not the case."

Other barriers include ambulance services in neighboring communities that can't or won't communicate with one another; inadequate ambulance coverage in rural areas; and no national training standards for emergency medical technicians. The system is so uneven that heart attack survival with one emergency medical transport service can be ten times worse than with another.

Marianne Gausche-Hill of Harborview-UCLA Medical Center says there's a crisis for children in the ER as well.

"There's over 110 million emergency department visits in the United States every year, of which 30 million visits are with children,” Gausche-Hill says.

Yet only 6 percent of emergency departments are fully equipped to deal with children.

The report calls for better coordination of hospitals and transport systems, a single government agency to oversee emergency medical care, an end to emergency room closures and diversions, and $50 million for hospitals that see a lot of uninsured patients.

Many of the reports' authors say that emergency rooms are victims of their own success. There have been no catastrophic failures so the public hasn't noticed that the system is at the breaking point.

The authors say public perception will change if something comes along to overload the system -- like pandemic flu, a bioterrorism attack or another major hurricane.

Read the Institute of Medicine's Three-Volume Report on Emergency Rooms