Driven by Doug Martsch's distinctive vocals, sprawling guitar heroics and intricate, catchy songwriting, Built To Spill melds epic jams with oddly jaunty pop-rock melodies in a way that scarcely disappoints. On You in Reverse, the group's seventh studio album -- and first in five years -- Built To Spill took a more collaborative approach than usual, and the result is an album that seamlessly marries larger-than-life drama with more leisurely five- and six-minute rock songs. 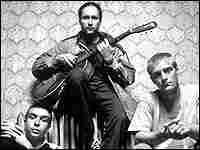 Built To Spill makes music that lingers longer than some might expect. hide caption

On "Liar," the band straddles both sides of that equation without straying too far in either direction, and the result sounds liberating and breezy, but still bracingly unpredictable and subtly intense. "Liar" is far from a conventional rock song, as Martsch's oblique but evocative lyrics -- "Passing over, passion's pull, passing everything" -- help make the song linger longer than listeners might expect at first.

Album
You in Reverse
Artist
Built To Spill