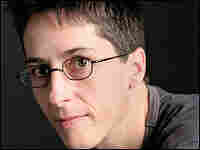 Alison Bechdel puts elements of a difficult childhood into her art. hide caption

A look at Bechdel's artwork in Fun Home hide caption

Comic strip artist Alison Bechdel writes and illustrates the comic strip, Dykes to Watch Out For.

She has now created a memoir in comic strip form that revisits her youth and her relationship with her sometimes distant father, Bruce, a high school English teacher.

The two often had trouble communicating, and they talked about literature as a way to relate. Her father died when she was almost twenty, an incident she believes was a suicide.

The setting for most of the memoir is a large, Gothic revival house, a home that caused Bechdel to identify with The Addams Family.

Bechdel's Comic Strip: Dykes to Watch Out For