When Keanu Reeves moves into The Lake House, he finds a puzzling letter in the mailbox, from a woman claiming to be a previous tenant. So he writes back. But the woman is just as puzzled as he is -- especially by the date on his letter.

Playing with time and words evidently sends hands to the jaw: 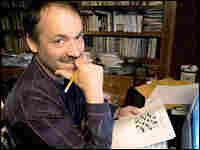 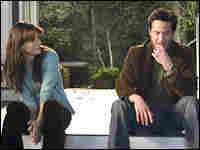 See, he's living in 2004, and they have -- heaven help us -- a magical mailbox. This being a romance, that's both a boon and a problem. Once they stop sparring, our two lovebirds can't just get together tomorrow night, because "tomorrow" for her is two years away for him. But they do have their letters, and that mailbox, and some pretty convoluted plot twists to keep them company as they bob like corks on a stormy sea of time... or something.

The Lake House, based on a Korean picture and directed by an Argentinean, features supporting players with a variety of intriguing accents, and it's tempting to say that something's getting lost in translation, except that we are, after all, in the Twilight Zone here, and all those different influences are more interesting than the leads are. Keanu Reeves and Sandra Bullock are attractive enough, but they're almost never on screen together, so there's not much of a chance to see any chemistry between them.

Still, the plot, if you don't question it too closely, does sort of parse, even when it doesn't make sense. So if you're willing to indulge a sappiness factor that's off-the-charts, and you don't mind movies that just sort of tread water, The Lake House may be your kind of time-waster.

Personally, I prefer playing with words, and who better to do that with than a guy whose name is Shortz, with a "z." Will Shortz, who is NPR's puzzle guy on Weekend Edition Sunday, and who has a day-job as crossword puzzle editor at The New York Times, is our guide in Wordplay to a pastime that occupies some 50 million Americans every week, including some reasonably famous folks -- from former presidents to Comedy Central newscasters.

Filmmaker Patrick Creadon spends the first half of Wordplay, not just with celebrity puzzleholics, but also with the puzzleheads who "construct" puzzles... even while driving down the highway.

In the film's second half, the focus shifts to the Annual Crossword Puzzle Tournament in Stamford, Conn., where computer graphics, snappy editing, and the decidedly odd personalities on display lend considerable tension.

Admittedly, the geek factor in Wordplay is every bit as high as the sap factor is in The Lake House. But if the choice is between a redesign of time, or pitting nerds against words, I'd say make time for the nerds.