Accessibility links
Gumshoes Cite More Cases, Hassles Post-Katrina Natalie Biondolillo has been a private detective in New Orleans for the past 22 years. She says Hurricane Katrina churned up plenty of new business: investigating insurance fraud, tracking people who don't want to be found. But it also created a whole new world of headaches.

Natalie Biondolillo has been a private detective in New Orleans for the past 22 years. She says Hurricane Katrina churned up plenty of new business: investigating insurance fraud, tracking people who don't want to be found. But it also created a whole new world of headaches. 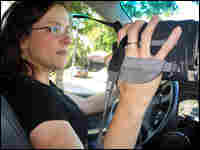 After Katrina, nothing in New Orleans is the same. The storm changed everyone's jobs from psychiatrists to garbage men. And so it is with private investigators. For them, the disaster has meant a windfall of business and a world of headaches.

On a muggy afternoon in Jefferson Parish, Louisiana, a brunette in a tight-fitting black top and hip-hugger jeans strides into PJ's Coffee Shop for a cup of praline-flavored joe. Natalie Biondolillo, private eye, sits at a table and compares notes with fellow investigator Henry McCoy on a person they're trying to locate.

Ms. NATALIE BIONDOLILLO (Private investigator, New Orleans): Well, do you want to try it one more time or do you want me to go ahead and give it a try this weekend.

Mr. HENRY MCCOY (Private investigator, New Orleans): Yeah, because I -either/or, it doesn't matter to me.

Ms. BIONDOLILLO: I'll tell you what, if you get a hit on his vehicle being there, call me and let me go try to give an approach. Because a lot of times females can be a little bit better at it than guys, just because we're females and they don't expect that we do what we do.

BURNETT: At four-foot-eleven and 95 pounds, Natalie Biondolillo doesn't fit the typical image of a gumshoe. She's a former Jefferson Parish deputy, who learned the business from her father, Louis, a long time investigator. Now in her 22nd year as a private detective, she's noticed the hurricane churned up all sorts of untidy situations in which her skills are helpful.

Ms. BIONDOLILLO: I guess it was around November, we got a call from - and it was actually an insurance company out-of-state, they wanted to know if this individual was really injured or not. And the first problem we had was locating him. Because when we went to the place where he lived, the house was uninhabitable. So, we had to find him.

BURNETT: The individual was scamming his workman's comp. They tracked down a family member who led them to his current address.

Ms. BIONDOLILLO: Turned out, since the hurricane, he thought nobody would be looking, he took a job driving a truck here, you know. And he's out on full disability. And here he was driving an eighteen-wheel truck, showing up at work at 8:00 in the morning, right around the block from where we're sitting right now. And we got a great video documentation of him working.

BURNETT: Since Katrina, Biondolillo and McCoy have collaborated on a number of different cases. For instance, they've spied on cheating husbands and wives in order to document extramarital affairs.

Mr. MCCOY: Like the adultery cases where people now are living in two different places. You have the wife living in Atlanta, you have the husband living down in New Orleans.

Ms. BIONDOLILLO: I hardly get adultery cases anymore. In the last six months I've had a ton of them. It's kind of like, marriages that were on the edge prior to the hurricane, a lot of them teetered over the edge after the hurricane and they've decided to end the marriages.

BURNETT: Biondolillo - her father's Italian, her mother French - climbs into a silver minivan. She sets her video camera and tape recorder, tools of the trade, on the passenger seat and blushes when she notices the boxed porta-potty in the backseat.

Ms. BIONDOLILLO: One thing that's happened since Katrina that I find rather interesting, you know, we have a lot of businesses closing early. We've all had to go buy portable bathrooms to use, because after 9:00 at night there's no place to go to a restroom. I mean, it's one of those crazy things that you didn't expect to have to do.

BURNETT: The untold story of some of the storm's alleged missing victims is that some of them don't want to be found. The chaos of Katrina made it easier for them to disappear. A defendant avoiding a subpoena, a deadbeat debtor, a parent who's kidnapped a kid and fled the state. A private investigator sells his or her ability to find people like this. In the trade it's called a locate. Since the storm, Biondolillo has tracked down subjects in Texas, Tennessee, Arkansas, Alabama and Mississippi, but she has to work harder these days.

Ms. BIONDOLILLO: The problem is you used to be able to go out and talk to neighbors to find out if they knew if somebody moved, if they left an area. Well, you go out to the areas now and there's no one there. You might find one FEMA trailer with one person living in a facility.

BURNETT: Or you might get lost because all the streets signs in places like Slydell and Laplace are still gone. Or streetlights are still out and the neighborhood is dark and deserted. Or you might find people in a very bad mood. And she says a subpoena telling them they're being sued can push them over the edge.

Ms. BIONDOLILLO: I think people in general are just angry or depressed and they want someplace to take their anger out on someone. So, we're an easy target. I keep a Taser gun underneath my seat here and a 9mm in my glove box.

BURNETT: Just in case anybody decides to pick a fight with Natalie Biondolillo, private eye.

Ms. BIONDOLILLO: And, I personally don't want to shoot somebody serving subpoena. I'd rather take a chance hitting them with a stun gun or a Taser.