Accessibility links
Excerpt: 'The Living End' Excerpted from The Living End by Stanley Elkin, selected by author Sam Lipsyte for his reading recommendation. 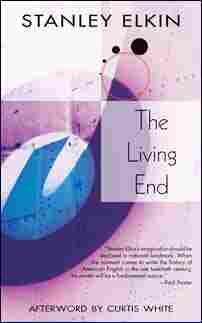 Excerpted from The Living End by Stanley Elkin, selected by author Sam Lipsyte for his reading recommendation.

'You Must Read This'

Ellerbee had been having a bad time of it. He’d had financial reversals. Change would slip out of his pockets and slide down into the crevices of other people’s furniture. He dropped deposit bottles and lost money in pay phones and vending machines. He overtipped in dark taxicabs. He had many such financial reversals. He was stuck with Super Bowl tickets when he was suddenly called out of town and with theater and opera tickets when the ice was too slick to move his car out of his driveway. But all this was small potatoes. His portfolio was a disgrace. He had gotten into mutual funds at the wrong time and out at a worse. His house, appraised for tax purposes at many thousands of dollars below its replacement cost, burned down, and recently his once flourishing liquor store, one of the largest in Minneapolis, had drawn the attention of burly, hopped-up and armed deprivators, ski-masked, head-stockinged. Two of his clerks had been shot, one killed, the other crippled and brain damaged, during the most recent visitation by these marauders, and Ellerbee, feeling a sense of responsibility, took it upon himself to support his clerks’ families. His wife reproached him for this, which led to bad feelings between them.

“I don’t know, May. I suppose they had some insurance but how much could it have been? One was just a kid out of college.”

“What about whosis? He was no kid out of college.”

“George died protecting my store, May.”

“Some protection. The black bastards got away with over fourteen hundred bucks.” When the police called to tell him of the very first robbery, May had asked if the men had been black. It hurt Ellerbee that this should have been her first question. “Who’s going to protect you? The insurance companies redlined that lousy neighborhood a year ago. We won’t get a penny.”

“I’m selling the store, May. I can’t afford to run it anymore.”

“I’ll see what I can get for it,” Ellerbee said.

“Social Security pays them benefits,” May said, picking up their quarrel again the next day. “Social Security pays up to the time the kids are eighteen years old, and they give to the widow, too. Who do you think you are, anyway? We lose a house and have to move into one not half as good because it’s all we can afford, and you want to keep on paying the salaries not only of two people who no longer work for you, but to pay them out of a business that you mean to sell! Let Social Security handle it.”

Ellerbee, who had looked into it, answered May. “Harold started with me this year. Social Security pays according to what you’ve put into the system. Dorothy won’t get three hundred a month, May. And George’s girl is twenty. Evelyn won’t even get that much.”

“Leave off, will you, May? I’m responsible. I’m under an obligation.”

“Responsible, under an obligation!”

“Indirectly. God damn it, yes. Indirectly. They worked for me, didn’t they? It’s a combat zone down there. I should have had security guards around the clock.”

“Where are you going to get all this money? We’ve had financial reversals. You’re selling the store. Where’s this money coming from to support three families?”

“We’ll get it? There’s no we’ll about it, Mister. You’ll. The stocks are in joint tenancy. You can’t touch them, and I’m not signing a thing. Not a penny comes out of my mouth or off my back.”

In fact Ellerbee had a buyer in mind—a syndicate that specialized in buying up businesses in decaying neighborhoods—liquor and drugstores, small groceries—and then put in ex-convicts as personnel, Green Berets from Vietnam, off-duty policemen, experts in the martial arts. Once the word was out, no one ever attempted to rob these places. The syndicate hiked the price of each item at least 20 percent—and got it. Ellerbee was fascinated and appalled by their strong-arm tactics. Indeed he more than a little suspected that it was the syndicate itself which had been robbing him—all three times his store had been held up he had not been in it—to inspire him to sell, perhaps.

“We read about your trouble in the paper,” Mr. Davis, the lawyer for the syndicate, had told him on the occasion of his first robbery. The thieves had gotten away with $300 and there was a four-line notice on the inside pages. “Terrible,” he said, “terrible. A fine old neighborhood like this one. And it’s the same all over America today. Everywhere it’s the same story. Even in Kansas, even in Utah. They shoot you with bullets, they take your property. Terrible. The people I represent have the know-how to run businesses like yours in the spoiled neighborhoods.” And then he had been offered a ridiculous price for his store and his stock. Of course he turned it down. When he was robbed a second time, the lawyer didn’t even bother to come in person. “Terrible. Terrible,” he said. “Whoever said lightning doesn’t strike twice in the same place was talking through his hat. I’m authorized to offer you ten thousand less than last time.” Ellerbee hung up on him.

Now, after his clerks had been shot, it was Ellerbee who called the lawyer. “Awful,” the lawyer said. “Outrageous. A merchant shouldn’t have to sit still for such things in a democracy.”

They gave him even less than the insurance people had given him for his underappraised home. Ellerbee accepted, but decided it was time he at least hint to Davis that he knew what was going on. “I’m selling,” he said, “because I don’t want anyone else to die.”

“Wonderful,” Davis said, “wonderful. There should be more Americans like you.

He deposited the money he got from the syndicate in a separate account so that his wife would have no claims on it and now, while he had no business to go to, he was able to spend more time in the hospital visiting Harold.

“How’s Hal today, Mrs. Register?” he asked when he came into the room where the mindless quadriplegic was being cared for. Dorothy Register was a red-haired young woman in her early twenties. Ellerbee felt so terrible about what had happened, so guilty, that he had difficulty talking to her. He knew it would be impossible to visit Harold if he was going to run into his wife when he did so. It was for this reason, too, that he sent the checks rather than drop them off at the apartment, much as he wanted to see Hal’s young son, Harold Jr., in order to reassure the child that there was still a man around to take care of the boy and his young mother.

“Oh, Mr. Ellerbee,” the woman wept. Harold seemed to smile at them through his brain damage.

“Him? He doesn’t understand a thing. You don’t understand a thing, do you?” she said, turning on her husband sharply. When she made a move to poke at his eyes with a fork he didn’t even blink. “Oh, Mr. Ellerbee,” she said, turning away from her husband, “that’s not the man I married. It’s awful, but I don’t feel anything for him. The only reason I come is that the doctors say I cheer him up. Though I can’t see how. He smiles that way at his bedpan.”

“I know,” she moaned, “I know.” She wiped the tears from her eyes and sniffed and tossed her hair in a funny little way she had which Ellerbee found appealing. “I’m sorry,” she said. “You’ve been very kind. I don’t know what I would have done, what we would have done. I can’t even thank you,” she said helplessly.

“Oh don’t think about it, there’s no need,” Ellerbee said quickly. “I’m not doing any more for you than I am for George Lesefario’s widow.” It was not a boast. Ellerbee had mentioned the older woman because he didn’t want Mrs. Register to feel compromised. “It’s company policy when these things happen,” he said gruffly.

Dorothy Register nodded. “I heard,” she said, “that you sold your store.”

He hastened to reassure her. “Oh now listen,” Ellerbee said, “you mustn’t give that a thought. The checks will continue. I’m getting another store. In a very lovely neighborhood. Near where we used to live before our house burned down.”

“Oh yes. I should be hearing about my loan any time now. I’ll probably be in the new place before the month is out. Well,” he said, “speaking of which, I’d better get going. There are some fixtures I’m supposed to look at at the Wine and Spirits Mart.” He waved to Harold.

The tall redhead came close to him and put her hands on his shoulders. She made that funny little gesture with her hair again and Ellerbee almost died. She was about his own height and leaned forward and kissed him on the mouth. Her fingernails grazed the back of his neck. Tears came to Ellerbee’s eyes and he turned away from her gently. He hoped she hadn’t seen the small lump in his trousers. He said goodbye with his back to her. 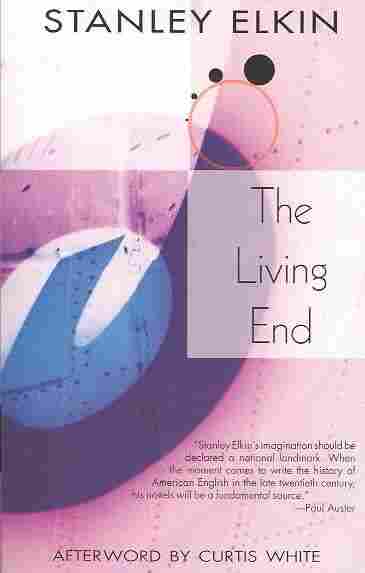 by Stanley Elkin and Curtis White