Accessibility links
Work on Massive Seed Vault to Begin in Norway On July 19, the leaders of five Nordic countries will gather on the remote Norwegian archipelago of Svalbard, halfway between the Arctic Circle and the North Pole. They'll lay the foundation stone for an underground vault that will hold millions of seeds, a kind of agricultural Noah's Ark -- or Doomsday Vault -- meant to help the world survive a catastrophic event, such as an asteroid strike.

Listen
Work on Massive Seed Vault to Begin in Norway

On July 19, the leaders of five Nordic countries will gather on the remote Norwegian archipelago of Svalbard, halfway between the Arctic Circle and the North Pole. They'll lay the foundation stone for an underground vault that will hold millions of seeds, a kind of agricultural Noah's Ark — or Doomsday Vault — meant to help the world survive a catastrophic event, such as an asteroid strike. 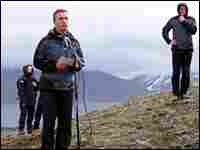 Norwegian Prime Minister Jens Stoltenberg and other Nordic leaders gathered in Longyearbyen, Norway, on Monday to launch construction of an underground vault that will hold millions of seeds from all over the world. Dan Charles, NPR hide caption

Protecting this country's hundreds of millions of acres of wetlands is a big job, but on a barren mountainside a few hundred miles from the North Pole today, an even more ambitious preservation project got underway. The Prime Ministers of five Nordic countries launched the construction of a huge underground storage vault. It will hold millions of seeds from all over the world. Some call it a doomsday vault, others, a Noah's Ark for global agriculture.

Inside an abandoned coal mine on a group of arctic islands called Svalbard, there's a steel container, big as a trailer, filled with seeds.

CHARLES: Arna Kristoffersson used to work in this mine. Now he's the local representative of the Nordic Gene Bank, which put the seeds here. He leads the way down the mine shaft, deep into the mountain. We're inside permafrost. It's about 26 degrees in here. Ice crystals cover the walls. We're only about 700 miles from the North Pole.

Mr. KRISTOFFERSSON: Everybody curious to see what's inside?

CHARLES: Kristofferson reached out a long glass tube. It's filled with a few hundred beans. They've been in here for 22 years. If you planted them, though, they'd grow just as well as last year's harvest. This is an agricultural gene bank, a small one. There are hundreds of them around the world. They hold samples of 100,000 kinds of rice and a 1,000 kinds of wheat, many as different from each other as a beagle and a Great Dane. The seeds look ordinary enough but Cary Fowler, Executive Director of the Global Crop Diversity Trust based in Rome, says they're precious.

Dr. CARY FOWLER (Global Crop Diversity Trust): This is the most valuable natural resource in the world. This is the biological foundation for agriculture. So in other words, as long as we intend to be on earth ourselves, we're going to need this diversity.

CHARLES: But most of those varieties don't grow in fields anymore. Farmers replaced them over the last century with standard crop varieties that grow better or produce more. So when plant breeders want to improve a crop, they have to turn to the gene banks to find plant varieties that can resist drought or survive disease. And Norway now plans to build the world's biggest gene bank. It will hold three million seed samples inside that same mountain on Svalbard where the small collection is stored.

Prime Minister JENS STOLTENBERG (Norway): It is of global importance to build such a seed bank because it will take care of seeds from all over the world. And it will be the only kind of its kind in the world.

CHARLES: In a kind of groundbreaking ceremony on the rocky mountainside, Norway's Prime Minister, Jens Stoltenberg, poured a bag of seeds into a tall plastic cylinder filled with rocks. Those rocks and seeds will become part of the cornerstone of the new underground vault.

The new vault will be a lot bigger than the steel chamber in the coal mine. It will also be much colder, refrigerated artificially to 40 below zero. So global warming shouldn't be a problem. It's suppose to hold a secure backup copy of seed samples held by hundreds of gene banks all over the world in case disaster strikes there.

It has sometimes. Seed collections in Iraq and Afghanistan were destroyed by war recently. But this place, says Arna Kristofferson from the Nordic Gene Bank is super secure.

Mr. KRISTOFFERSON: Norway is so remote, way, way up North, it's not possible for people to come here and discover and to destroy this place if they really wanted.

CHARLES: As many polar bears live here as people. The 2000 people who stick it out through the winter don't see the sun for almost four months. Of course this time of year the sun never sets. The vault is supposed to be finished by the end of next summer. The project's supporters hope it just won't preserve seeds, but also capture people's imaginations. It's a symbol, they say, of just how precious and irreplaceable those old seeds are.

For NPR News, this is Dan Charles in Longyearbyen, Norway.