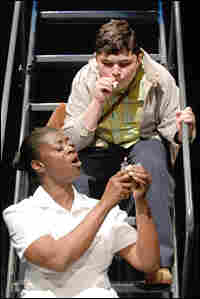 American playwright Tony Kushner is best known for Angels in America, the two-part drama that won the Pulitzer Prize and numerous Tony awards on Broadway, and won Emmies as a TV production. His plays are politically controversial, and are not always cheered by the critics.

A semi-autobiographical musical called Caroline, or Change got lukewarm reviews on Broadway, but four years later, a revival is playing to glowing notices, packed audiences and standing ovations at the Studio Theatre in Washington, D.C. Kushner talks about the show and takes caller questions about his work.

Songs from the Musical

'Sixteen Feet Beneath the Sea'

'Noah Down the Stairs'